If you’ve been following Seoulbeats for a while, you might have noticed that we’ve been working to push out a higher volume of reviews in a more timely manner for the past couple of months. As part of our plan to bring better coverage of releases to our readers, we are reviving an old segment, Unsung Artists.

Each month, there are releases that we can’t or don’t review for a variety of reasons—perhaps we are at the mercy of school or work, or a MV just doesn’t give us enough to work with to produce a full-length review. Yet there are often songs or MVs that we can’t bear to let slip under the radar, or that we still have something to say about. Unsung Artists brings some limelight to such releases by providing a series of short reviews on a monthly basis.

Recent boy group debuts seem to be leaning more towards bright images, and Top Secret is no exception. “She” is an upbeat dance track; sound-wise, it brings to mind Seventeen, Astro, and even a touch of Mamamoo. It may not be the most outstanding in production quality and delivery, but there’s an undeniable energy to the song, and the refrain, “this love”, makes me feel like snapping my fingers along.

The use of saturated pastels in combination with the choreography reminds me very much of Seventeen. With the group’s success, it’s no surprise that other companies would be taking a leaf out of their book. This is no big issue, especially if the groups are able to establish their own take on a well-received niche—for instance, 2NE1‘s debut opened up the possibilities for other independent, girl crush groups to break out on the scene. The problem only arises if companies fail to differentiate their idols when taking from popular groups; for example Pentagon‘s latest, “Pretty Pretty”, veered quite dangerously towards blatant imitation of Seventeen.

Fortunately, Top Secret manages to steer clear of this, if only barely. “She” is a decent debut, and the members look like they are genuinely enjoying themselves while performing. For now, the MV and song may not be enough to set them apart from other boy groups going for a bright image, but it piques enough interest for their comeback.

Still on debuts, Produce 101 contestant Kang Sira released a mini album, Sira, with a MV for “Don’t Wanna Forget”. She is housed under a small company, Chungchun Music, the label that managed Busker Busker. Her debut title track is a safe ballad, and the MV doesn’t take visual risks, but Sira has a knack for delivering emotion. The song is not outstanding for its genre, but I found her plaintive chorus floating back into my mind after just one listen.

Although this debut doesn’t go in for anything spectacular, the effort invested in it is lovely. A more careful look at the MV reveals how the melancholic mood of the song is reinforced by visual details. There are slow fades in and out, and the effect created is almost akin to blinking; the camera movements are similarly drawn-out. The use of lighting is also carefully done: backlighting is paired with soft focus for an ethereal misty effect, and contrasts between light and shadow bring out sadness. There are quicker cuts in editing as the song builds to a climax, yet it doesn’t sacrifice emotional weight.

On the opposite end of the humble debut, there’s Blockberry Creative pulling out all the stops (and dollars) in an ambitious pre-debut project for Loona, whose Korean name translates to “this month’s girl”. While I have reservations regarding the effectiveness and financial soundness of a year-long pre-debut project, I have to give credit to some aspects of Blockberry’s promotional strategy, such as assigning animals to each of the girls, and having them release solos as well as unit songs to train focus on individual members but still establish them as part of the group.

Yeojin is the youngest member revealed so far, and her MV and song, “Kiss Later”, are appropriately lively and cute. Heejin may have gotten the most interesting song and aesthetically pleasing MV in “Vivid”, but “Kiss Later” is conceptually the quirkiest and my favourite of the lot.

The paper-masked princes and frog prince popping out everywhere are slightly creepy, but the lyrics push back against a simplistic reading of the MV as a story of a weird stalker frog prince. The persona, it turns out, likes her frog prince back; she’s just not mentally prepared for anything beyond hand-holding and hugs yet. She urges her boyfriend not to egg her into kissing him:

I need to be ready, wait for me
I like you too
But today, just hug me

The earnest, firm voice of the young persona in the lyrics lends the song a maturity beyond simple bubblegum pop tropes singing of first love and crushes. It also helps the viewer enjoy the MV’s narrative too; having established that the frog prince is no stalker, the viewer can enjoy the funny reactions of Yeojin as she runs into him, and delight in the little twist at the end.

It has only been a year and a half since April’s debut, but they’ve already seen two members depart and the addition of two new members, Chaekyung and Rachel. DSP Media has been promoting the group fairly consistently, but unfortunately, four promotional cycles in, the group still hasn’t been able to find a defining, unique image or sound. Sound-wise, April has been going for dance pop numbers that emphasise their sweet vocals, but their songs fall into a somewhat generic girl group sound; just off the top of my head, A Pink, Lovelyz, and to an extent Oh My Girl work with a similar style, and with greater success.

For this reason, “April Story” leaves me feeling ambivalent. It is definitely a pleasant listen: it has a subtle Christmas vibe without going overboard, and it lets their vocals shine. It’s a step in the right direction—the song gained more traction on music charts than earlier releases—but it’s still not distinctive enough to stand out against intense competition in the girl group scene.

I enjoyed the MV’s concept of making the girls miniature-sized, but it ended up being just a dance MV, which had me wondering why they couldn’t have been life-sized. The main aim of the MV was probably to showcase the dance, especially new member Rachel’s background in ballet, but the MV could’ve interspersed her solo and the choreography sequences with scenes that made better use of the fun miniature concept. Got7‘s “Just Right”, for example, balanced the two without sacrificing the performative aspect.

One reason this MV made the list is Choi Woo-shik. He isn’t good-looking by average Korean actor standards, but when he acts, you’re drawn to how he becomes the character he is portraying, and the gamut of emotions he displays with a mix of rawness and subtlety. Whether it’s in this MV or in Day6‘s “Congratulations”, the narrative is nothing new, but he makes you feel for the story anyway.

I’ve mentioned above and in the end-of-year review that a MV doesn’t always need to be high budget to be compelling. The limited budget that went into “That Moment” shows, but it makes the best of what it has to convey the emotions of the song. The handheld camera creates a sense of spontaneity, almost as though the viewer is following the main characters in the rundown neighbourhood. The pairing of setting and simple camerawork with the acting brings a sense of grittiness and immediacy that works with Seulong’s smooth vocals to express the sadness permeating the song.

Shinee, “Get The Treasure”

Because the amount of Korean releases is already overwhelming enough, we don’t usually review K-pop artists’ overseas releases. Watching Shinee’s PV for their latest Japanese title track, “Get The Treasure”, is quite the experience. Never mind that there doesn’t appear to be any treasure-getting; it takes the mannequin challenge to a whole new level with a detective film setting.

Instead of being the mannequins, the boys are the only moving elements in an entirely frozen setting. This creates a tension between movement and stillness, reinforced by how everything else has come to a standstill in the middle of chaos: cards are scattered mid-air in a casino that is being raided, drinks are about to be spilled, and a cart is about to tip over. In the midst of this, Shinee struts in and pulls props from the human mannequins with an air of indifferent chic.

The mannequin concept is purposeful: by creating a backdrop of motionlessness, it highlights every movement that takes place. The drama of this contrast is sealed, of course, by Shinee’s showmanship, as well as interesting touches that break the fourth wall, like Minho flicking a clip that breaks one corner of the camera.

Kris is a saucy man indeed as he violates all party codes by spilling his special “juice” all over the floor of a black-lit warehouse while his posse swirl around him on fancy motorbikes. Really, he can’t lose, he’s got the juice, and we know he does. If you take anything away from this release, it’s that Kris Wu’s got a lot of sauce on his roster—or maybe in his pasta. Honestly, it’s a little hard to deduce.

That’s all from us for January. What were some of your favourites from this month, readers? Is there anything you would like to see from this segment in future? Drop us comments below. 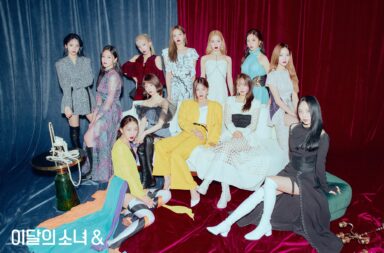