K.A.R.D Continues to Build Their Niche with “Don’t Recall”

Oh K.A.R.D, you have bewitched me mind, body, and soul. I listlessly refreshed and refreshed my YouTube homepage on February 15th, 23:59, waiting for your new release to appear. When it finally did, I immediately looped your video on infinite repeat. Three days later, the song is still on my morning playlist. You managed to do this to me in spite of the mediocrity of “Don’t Recall,” which is to say my relationship with you is starting to feel a bit like love – mostly irrational, but completely addictive.

The song itself is a serviceable (if not sluggish) derivative of tropical house dance pop, replete with squeaky snyth chord progressions and unnecessarily autotuned voices. The most engaging component here is the back-and-forth lyrics between the male and female members K.A.R.D, channeling a dueling pair of lovers who want different things. In this sense “Don’t Recall” falls in line behind “Oh NaNa” and fully embraces the ingenuity of The Chainsmokers – one of the first EDM groups to truly duet with their featured artist — accelerating towards the drop through an exchange of gendered viewpoints.

This kind of dialogue was already the new norm in K-pop, as artists collaborated with other singers of the opposite sex (Baekhyun and Suzy’s “Dream,” Dean and Hieze’s “And July”). But DSP Media realized that this trend was something that could be capitalized on in the form of an idol group, through electronic music. Rather than constantly reconfiguring new couples for new songs, why not make this conversation the main shtick of a singular ensemble? And so the public was introduced to K.A.R.D, one of the most refreshingly honest formations of group members I’ve seen during my decade in K-pop.

By this I mean I feel as though I know the members of K.A.R.D; they remind me of my attractive friends who are always down to go out, even on a rainy Wednesday night. Mostly they seem to be a coed bunch that laughs, drinks, takes selfies, and interacts in a way that is natural to most twenty-something friend groups. They dress like my peers too, even during the dance sequences of “Don’t Recall” – I see those kinds of outfits on Facebook every few months, as another set of acquaintances shows off what they wore to some college’s blacklight party, or a weekend clubbing in Vegas.

It’s a drastic change from the idol groups that marked my teenage years, when the sets of immaculately groomed artists came in the single-gender variety. They had no blemishes on their faces and no significant others in their lives, but even if they resembled glass dolls I loved them anyways, because I was an Asian-American girl who was so happy to have a media microcosm where celebrities looked like me. 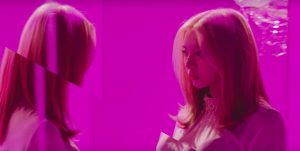 This love is being recalibrated now, shifting heavily in favor of K.A.R.D. Maybe as I’ve gotten older and greedier and lonelier, it’s no longer enough to watch artists who simply have familiar facial features. I want artists I can relate to on a personal level – something I wasn’t even aware of, until DSP introduced K.A.R.D. Maybe this can explain the group’s popularity internationally, even as they remain relatively unknown in South Korea: many of us immigrants and third culture kids don’t want perfect super humans to idolize, but messy young adults to sympathize with. We’re mesmerized by the mirrored reflection of K.A.R.D members who dab like us and flirt like us, all while producing the same Top 40 sounds we can’t help but listen to.

The question is whether this sense of familiarity will be able to sustain attention in the long run. It may be too early to say in this pre-debut stage, when the group seems set on establishing its tone by reiterating the same themes across releases. The MV for “Don’t Recall” is a pastiche of the saturated lights and segmented close-ups from “Oh NaNa,” while giving no storyline and invoking redundant references to cards (as though we need reminding that K.A.R.D stands for King, Ace, JokeR, and HiDden).

It seems DSP is still testing the waters, reluctant to take the plunge, though the overwhelmingly positive response to this release should be a clear sign that this is a group to invest in. I know I’m already hooked, in spite of a lackluster song and empty MV; here’s to stronger future releases that will also attract casual listeners.