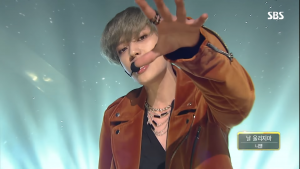 It’s time for another round of the Best of Weekly Music Shows! K-pop still believes in promoting the arts through various mediums, which works as a great advantage for fans seeking more content. We hardly ever have to worry about there being a week when there is absolutely nothing happening. Music shows also provide an outlet for rookies and veterans alike to perform on the same stage. As a result, we get to watch NCT Dream, B.I.G., H.U.B., Hong Jin-young, SF9, and Cross Gene in the same week.

Red Velvet enjoyed a nice winning streak with “Rookie” on the music show circuit. If I’m not mistaken, I hear their fandom will soon be named too. Cheers to them for all of their successes!

For anyone unfamiliar with this segment of Seoulbeats, this is purely a small collection of the author’s favorite performances from the past week. This is possibly the first time I’ve ever picked stages from almost every show. Normally, one dominates overall, but that didn’t happen. Hopefully, all of the shows will keep their game up, so I can pick a variety like this again.

Out of all of the sub-unit groups in NCT, Dream is my favorite. I love their concepts, and their choreography is more dynamic and fun. Because this is a group being catered to very young fans, we get stages that reflect a youthful spirit. I appreciate the camera crew capturing the dance from all angles, so we get the full effect. The styling has me giggling only because there’s something charming about NCT Dream in high-water pants. It’s probably the slight Michael Jackson vibes, but I find them darling anyway.

I still harbor conflicting emotions over the song because it reminds me of what you’d hear at the beginning of an anime. It’s not a bad thing, though. So what is there to love about this if the song isn’t my taste? Well, it’s the choreography! I know people have been raining praise on Red Velvet and G-Friend, but I encourage our readers to consider Dreamcatcher under the category of strong dancers. The girls have so much vibrancy, and this high impact routine isn’t one that couch potatoes should try. Seriously, if you want to do this dance, I strongly recommend building up your stamina since this doesn’t look like your grandma’s jazzercise.

Like Dreamcatcher, CLC has also undergone some changes in an attempt to remain seen on the K-pop radar. Hyuna helped cultivate this concept for the group and it shows. I feel like I’m watching several mini-Hyunas. That said, I didn’t care for their other performances for that reason. The high pitched rapping and nasally talk-singing put me off, but they toned it down a bit for this stage. What really sold me, however, was the interaction between the members. The ladies looked quite comfortable dancing closely to each other, and I’m not mad at it. Whatever they’re doing to be more relaxed with this style and each other, I hope it continues.

Someone may get catty and go “I think they’re overrated”, but I don’t care. I like this performance. Is it the most enthralling thing ever? No, but it’s a ballad. It’s perfectly fine not to have a million vocal runs in a song. That actually gets annoying to me, but we only get one climatic note near the end. That note caught my attention, and it wasn’t egregious. Also, the harmonies of this group touched me, and I love their soothing voices.

Unbeknownst to many, I have a bit of a tiny hatred for Niel’s stylist most days. There have been moments I wanted to ask some questions regarding why he resembles a circus poodle, but I digress. The bowl cut isn’t my ideal style for him, but at least, he looks closer to his age now. He’s in his early twenties and putting out more mature music, so this should be reflected in all aspects of his stage: the clothes, hair, dancing, and set design. It all combines together to create a picture that embodies the song and enhances it. Because all of these things worked beautifully here, I appreciated this performance more than the MV itself.

What were your favorites from the past week?