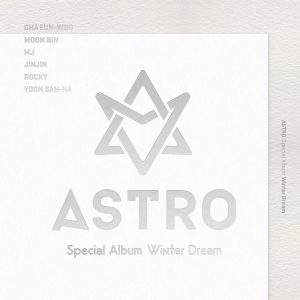 In celebration of winter, Astro recently came back with a mini-album titled Winter Dream. This release is the last release of their four-season project, and is preceded by their debut mini-album Spring Up, as well as Summer Vibes and Autumn Story.

This mini-album is the shortest of the four with only three tracks, whereas the preceding releases have each had four to five songs. Unfortunately, Astro will not be promoting on music shows, but they will be performing their new songs during fan signs and showcases.

Winter releases usually fall into one of the two categories: melancholic and lyrical ballads or cheerful and warm tracks.  Upon first listen, “Winter Dream” seems to belong to the latter: the title track is definitely not a slow ballad, and is on the more upbeat side, with strong pop elements and heavy bass and percussion lines. The electric guitar during the bridge of the song complements the following high notes during the ad-libs well; both have similar timbres. However, the song is also not a cheerful one, in fact, it is the opposite: the rap section and the lyrics all point to a sense of forlornness. The low-pitched rap, contrasted by the soft melodic line, creates a wistful tone, which corresponds to the meaning of the lyrics which detail the sorrow of a breakup.

The sadness and hopelessness presented in the lyrics seems to be at odds with the strong, energetic beat of the music. The chorus is also repeated quite a few times, but it isn’t exactly catchy. While title tracks are supposed to be forceful and unforgettable, this one was simply fell short: it was lukewarm, not quite warm and fuzzy but also not overwhelmingly sorrowful. 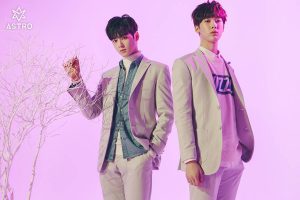 “Cotton Candy”, as the name suggests, gives off sweet and adorable vibes. Right from the start, the tinkling of the bells in the instrumental background present us with a cheerful mood that brings back the festive atmosphere of the winter holidays. The track is on the quicker side, with lots of synth notes making up the accompaniment. However, one department that this track falls short in is creativity — both the chorus melody and the instrumentals are repetitive with very little variation, which makes the track rather tedious to listen to. It could work as a backing track, but it simply does not stand out enough on its own.

The final track “You and Me (Thanks Aroha)” is a fan song for Astro’s fans Aroha. With a slightly slower, moderate tempo, this is a cute song with a very laid-back and relaxed mood, making it easy to follow and sing along. Unlike the previous two tracks, the embellishments of the acoustic guitar and bells adorn the accompanying instrumentals to add some much-needed spice. The lyrics will give you cavities, and will definitely delight fans:

I am yours
You are my light
View the same place
I can be happy to see the same place.
Hope to be with you
We make a story
Do you want to walk together?
A flower way spread out in front of you 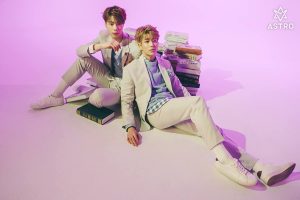 As my Recently Played playlist has been jam-packed with sad ballads this season, I’ll admit to being little surprised Astro’s rather upbeat and  cheerful songs on Winter Dream. However, this release is in line with their overall concept for the entire project: pop-inspired releases that solidifies their sweet, boy-next-door image. For example, in their summer release “Breathless“, there is a fresh style and sound that is very similar to what we hear in this album. This bright image that Astro is presenting isn’t by any means original, but it does work well for them. As a relatively young group with equally young members, it might be best to pass on the mature concepts for the time being.

The group’s of season-themed releases is also very refreshing — not only does it ensure that the group regularly puts forwards releases, it can allow the group to showcase different concepts and styles that are befitting of the mood of that particular time of year. However, I don’t think that Astro took full advantage of this concept: they played it safe and stuck to a similar sound all throughout the year, which resulted in a lack of memorability, interest, and variation in Winter Dream. Astro is a group with a lot of potential, so I hope that they will continue to grow and show us their different sides.