ASTRO Warms Up with "Spring Up" 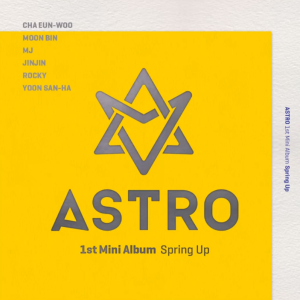 After being introduced in the web drama To Be Continued, the six-member boy group from Fantagio Music, ASTRO, has finally debuted with their mini album Spring Up. The collection of songs consist of five tracks that play up their flower-boy concept making this album very appropriate for the season. The songs play cohesively together and cement their style with pop and electronic sounds.

Spring time usually marks a new beginning, and that theme is prevalent throughout the album. The overall concept revolves around the emotions and thoughts that go through our heads during the beginning stages of love. “Hide and Seek,” “Puss in Boots,” and “Morning Call” all express the apprehensions of someone who wants to confess, while “Puppy Love” takes a completely different route from the rest and is a ballad about a first breakup.

The album starts with the intro track, “OK! Ready,” that gives the listener a taste of what’s to come. Rather than being a completely isolated track, the intro seems to be more of an extension of their title song “Hide and Seek.” The uplifting electronic sounds combined with the constant electric guitar rift and fast beat set the tone for a lively atmosphere.

Astro’s title track “Hide and Seek” nicely continues from “OK! Ready” with the same electric guitar rift in the background, but this time we get some vocals layered on top. The song is exactly what you would expect until the rap starts in the second verse where the music seems to drastically change. It’s not too jarring and is actually a refreshing break from the tone we’ve been accustomed to from everything preceding it. The lyrics that accompany the music are a fitting analogy of the game of hide and seek and the perceived game of love:

While the melody is pleasant and the lyrics are able to convey its message in an inventive way, the song is only decent at best. Unfortunately, it doesn’t do anything to differentiate itself from any other pop song we’ve heard in the past. The reoccurring motif played with a synth during the chorus seems to be something you could lift and drop onto any other pop song. As a title track, it seems very reminiscent of groups like Boyfriend and B1A4 and is not something that sticks with the listener for very long.

Although “Hide and Seek” is the group’s official debut title track, the first thing we saw from Astro was the song “Puppy Love” from To Be Continued. Unlike any other song from Spring Up, “Puppy Love” is a ballad that takes on a completely different tone. “Puppy Love” allows the boys to show off their talents and harmony as a group. Their vocal abilities are displayed toward the end of the song and is definitely promising for a rookie group. 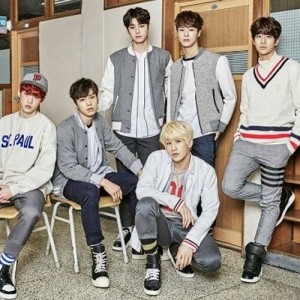 The instrumentation is very simple for this song with the piano as the main focus throughout the song. The strings provide an extra layer of emotion and harmonizes with the group’s voices very well. The vocals starts out slow and softly, building as they express their repressed feelings until they essentially belt their hearts out at the end.

The addition of a rap verse does not feel out of place at all. It is able to express not only sadness, but also the anger that comes with a break up. The lyrics accompany these emotions by expressing regret from all of the memories that come rushing back of things that were taken for granted:

It’s a shame that “Puppy Love” isn’t Astro’s title song because it’s much more emotionally grabbing and focuses more on talent rather than concept.

“Morning Call” gets us back on track with an uplifting acoustic song about the feelings of love. The lyrics of “Morning Call” voices the thoughts of the boys as they express their desire to start off each morning with the girl they love. The vocals of the boys are clear, and, incorporated with the guitar, the combination creates a soothing song that you would want to listen to in the morning. The chorus picks up with an uptempo beat and electronic sounds that don’t drown out the guitar. The melody is catchy and makes the track something that you can replay over and over again. And although “Morning Call” emphasizes Astro’s flower boy concept, it does not try to sound overly cute. 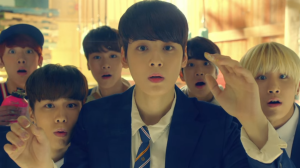 Lastly, “Puss in Boots” grabs attention with its title. While “Puss in Boots” is another song about the developing feelings for a girl, the lyrics are written in a way that is a little more endearing and different from what we’ve seen. Your crush’s jokes might not be funny, but you just can’t help but like her even more because of it. The person we like is never perfect, but it’s those imperfections that draw us in even further. It’s a refreshing take and definitely adds some depth to the song.

The song is mostly electronic with drums and the occasional live piano or horn thrown in the mix. Like “Morning Call” and “Hide and Seek,” the song is upbeat pop with elements of jazz. “Puss in Boots” sounds familiar to things we’ve heard but the mix of different instruments is able to differentiate it enough from others, even adding in the sound of a cat.

Spring Up is a decent mini album that shows what we can expect from Astro. The concept of the album is easy-going and the addition of “Puppy Love” adds in a different flavor. “Hide and Seek” may not be the best choice for a title song, but people who take the time to listen to the whole album will see that the boys have much more to offer.

Are you excited about Astros’s debut? What did you guys think about Spring Up?