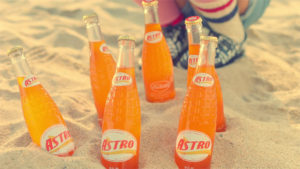 K-pop is no stranger to unusual ideas. From vampires and variations on the figure of Dr. Jekyll/ Mr. Hyde to zombies and Power Rangers, MVs often draw their concepts from a range of literary classics, television shows, and films. Sometimes, though, the most surprising concepts are the ones that make use of the ordinary: Orange Caramel as sushi, for instance, or Lizzy making a whole song about PMS. Or Astro turning into bottles of soda in their latest MV, “Breathless”.

We’ve had some fun surprises from AkMu‘s “Re-Bye” and Baek A Yeon‘s “so-so” earlier this year, but “Breathless” really came out of the left field with its simple yet ridiculously kooky idea. I just couldn’t stop smiling throughout the whole video. It doesn’t just score in the novelty department; it brings out Astro’s sunny image and the vibrance of the song, and adds a playful touch to otherwise typical lyrics.

Concepts are often selected in order to shape the image of the K-pop artist and associate them with certain qualities such as innocence, masculinity, or quirkiness. “Breathless” does the reverse, applying the attributes Astro has as a group to the concept. Astro’s brightness taps on their youth, and they present an image that is fresh and cute without having to resort to cloying aegyo. Astro, the MV suggests, is refreshing like a bottle of cold soda in the summer heat. 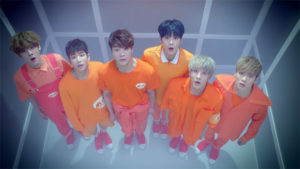 The song is typical in subject matter and rhetoric, with the persona describing how a “pretty girl” makes him “breathless”. The MV has familiar elements too: a female protagonist (played by I.O.I‘s Choi Yoo-jung), and a beach setting common in K-pop summer releases. But the ordinariness ends when the viewer realises that Astro are no longer people, but soda bottles, the female protagonist is not Astro’s love interest, but a mock-evil antagonist, and the beach is no idyllic paradise, but the site of Astro’s distress.

Instead of shrinking Astro into miniatures like Got7 in “Just Right”, the MV made simple yet creative use of props and editing to establish the connection between Astro and the bottles of Astro soda. The boys are dressed in shades of bright orange similar to the soda, and the use of match on action links Sanha to a bottle that rolls to a stop at Yoo-jung’s feet. Eyeline matches show the boys’ horror when they are placed in a cooler as Yoo-jung stares down at them, and their fear at being strung up in a net as Yoo-jung smirks at them and cackles. It’s light-hearted and great fun to watch. 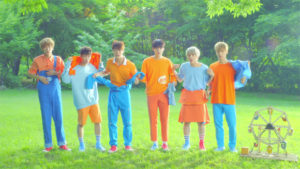 My favourite moment in the MV is when Yoo-jung mixes blue and orange soda, and a cut to the next shot shows Astro baffled and amazed by the sudden change in the colour of their clothes. A close second is the part Yoo-jung gets ready to hammer the caps off the bottles, and the boys pop up wearing the cutest white hats. The MV may be all fluff and fun, but serious attention has been paid to the little details that make it so delightful.

The comicality of the MV is heightened by how it playfully interprets the cliched lyrics. “It’s like a dream”, Astro sing, and they are dreaming in the MV. The persona describes how a look from his love interest makes him feel “dizzy”, like “there’s no gravity”. The Astro boys are dizzy because Yoo-jung swings them round and round in the cooler and they tumble back and forth. They are literally deprived of oxygen and made breathless when they are carried around in a plastic bag. The literal take on the lyrics is simple, but so clever and enjoyable. 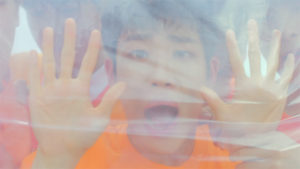 Befitting the MV, the song is fun and bright. It’s not as instantly winning as their debut title track, “Hide and Seek”, but it’s pure sunshine and has definitely earned a place on my K-pop summer playlist. While there are no stand-out vocals at the moment, Astro deliver the mood the song needs, and the happiness is infectious. Their singing complements each other, and the line distribution is pretty even.

What I appreciate most about “Breathless” is the sense that Fantagio Entertainment knows what they are doing with Astro. Astro may not top other rookies like KNK in terms of vocal skills, but the charm of their sunny image is difficult to resist. Judging by the names of their albums so far—Spring Up and Summer Vibes—it seems like Fantagio is planning a series of season-themed comebacks for them ahead. The idea of songs to suit the season isn’t new, but if “Breathless” is any indication, we may have more surprises to look forward to in the execution of the seasonal concept. 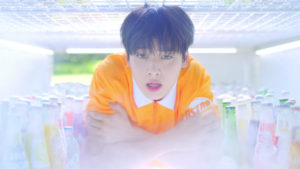 The likening of Astro to a refreshing bottle of soda in summer is a continuation of the message that the “Hide and Seek” MV offers: Astro’s music brings happiness to listeners when they need it. It’s a simple but sweet aim, one that fits the group’s young age, and one that is appropriate for fans young and old. It’s a good place to start, and a good place to stay for a while. Here’s hoping that Astro brings us more sunshine instead of hopping straight on to more “mature” concepts (or heaven forbid, misguided notions of masculinity).

Readers, what do you think of Astro’s concepts and songs so far? What would you like to see from them in future?