Sam Kim and Loco Melt The Heart in "Think About' Chu" 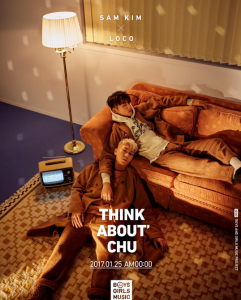 Here in the northern hemisphere, we are still trapped in the cold wasteland of winter. However, Sam Kim and Loco have teamed up to bring us “Think About’ Chu”, a single that can melt even the most frozen of hearts and bodies.

“Think About’ Chu” is a wonderful example of concept vs execution, and how much power that latter one truly has. At its base, this is a very simple and very done idea: the romantic ballad sung by a man who wants his girl to know he misses her. Yet, in Sam Kim’s hands, it feels potent and fresh rather than another example of the most overdone concept in music.

“Think About’ Chu” draws heavily on 70’s funk, both in musicality and tone. The instrumentation is soft, but not gentle. The drums are not buried in the mix, but given emphasis; this provides a core of power that is mellowed out by the underplayed guitar and keyboard. This not only allows for “Think About’ Chu” to maintain strength on an instrumental level, but the inversion of instruments keeps the audiences ear– it’s familiar enough that it doesn’t grab our attention, but different enough from the standard of guitar and keyboard prominence that it’s harder to tune out.

The bass is underplayed, but this works in the song’s favor. It provides a sexual undercurrent, but doesn’t transform “Think About’ Chu” into an all-out sex jam. Honestly, the only complaint I have about the instrumentation is how every time I hear the opening drum riff, I expect to hear Tyler Joseph lamenting about wanting to find better sounds.

Of course, what really makes “Think About’ Chu” work is Sam Kim himself. Lord on a stick, this kid has a bright future ahead of him. It’s not power, which he does have, that makes grabs the audiences ear. Instead, Sam Kim has pure charisma. There is something almost magnetic about his voice that rises above the emotive inflections, the tenderness, and the rawness that pulls the listener in and keeps them enraptured. His vocal delivery is what really turns “Think About’ Chu” into something special.

In anyone else’s hands, this would be a blatant sex jam, with the mentions of nights spent together and not talking painting a clear picture of why this narrator is missing his girl so much. Coming from Sam Kim, it sounds like a plea for intimacy; as if he misses the sex far less then he missed just being with her. Loco is no slouch either, adding a much-need rougher edge to the track, but Sam Kim is the true star here. 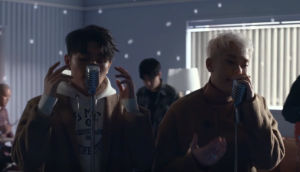 The MV follows the music’s example of a simple concept with good execution: Sam Kim and Loco, alone in a room and missing their girls. But how it’s done, once again, elevates a done-to-death idea. The room is empty, with each one adding touches here and there. Yet the room remains mostly empty and devoid of personal touches, invoking the idea of bachelor pads that lack the female touches that turn a house into a home.

Furthermore, the furniture is only real when they’re interacting with it. Anytime they’re not sitting on the couch or rolling out a rug, the furniture is replaced with virtual look-a-likes. This pounds home the idea that without their girls, Sam Kim and Loco’s lives are empty, sterile, and don’t feel real to them, enhancing the intimacy of the music and reminding the audience just how much we need the people we love.

All in all, “Think About’ Chu” is a knock-out song. Moody for the winter months, but tender and honest, and with a flame that brings light and life to all who hear it.

Sam Kim’s “The Juice”: What it’s Like Being Stuck in a Funk

Beats of the Week: From K-YouTubers & Pride Month to Onewe & Idol Bands