Park Kyung Gets Personal in His "Notebook" 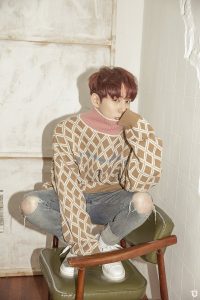 A notebook contains the things that are important to us. There may be dates, ideas, stories, letters, or other little reminders of a day or life written on the sheets. What is written in a notebook is a raw representation of our lives, and that is precisely the type of feelings that Park Kyung has captured in his first solo mini album Notebook. While most of the tracks on the mini album are not new songs, the two new tracks are enough to make the whole mini album feel complete.

Notebook tells the narrative of a relationship. The initial feelings of giddiness that accompanies the beginning of a new relationship comes forth in “Ordinary Love.” It encompasses the uncertainty of starting out with a new person and not knowing exactly where the two of you stand. Everyone has wondered if a new relationship is going to turn into something or is just a passing thing, and Kyung brings it to life.

You feel it too, this is a bit funny
Like the development, crisis, peak and ending of a book
It’s always the same process, it’s just that
The temperature of dating gets hot then cools down
It’s always been like that so I can’t even get butterflies anymore

The relationship is being compared to a book, complete with development, turning points, and an ending. Even with this being not quite the typical relationship that Kyung is used to, he’s willing to go through the process of this relationship.

The next page in the notebook is the first title track “When I’m With You,” which features BrotherSu–whose voices weaves almost imperceptibly with Kyung’s–and is produced by Kero One. If we follow Kyung’s outline from before, this is the development stage. Now that the couple has gotten to know each other, it’s time for things to go from awkward to serious. There’s the sense of comfort and security that comes with knowing that you genuinely care for this person and they care for you.  This feeling continues in “Ogeul Ogeul,” which is the epitome of cutesy love song–pretty much the lovesick couples on Valentine’s Day in song form. 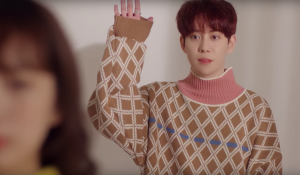 We move onto crisis, which also is the peak, in “Inferiority Complex” where the worst that can happen, does. Jealousy and insecurity worm their way into the relationship, causing strife and many misunderstandings. The dialogue between Kyung and Eunha show just how frustrating it can be trying to talk to someone you just can’t get through to. Despite Eunha’s many reassurances, Kyung’s self-doubt negates anything she tries to tell him. There’s no room for that kind of negativity, especially when one person doesn’t want to drop it. In the end, the relationship falls apart, which we see in the final page.

Notebook ends with the second title track “Memories” featuring Yoon Hyun-sang. While all the songs thus far have been mellow, jazzy, and slightly upbeat, that doesn’t take away from the melancholy behind this final track.

I took you for granted, cheapening your priceless emotions
I wanted an overwhelming love
But when I had it, I was too overwhelmed
I couldn’t handle it
I’m regretting it, regretting it

It’s a simple yet beautiful way of saying one of the hardest things there is to admit to someone: “I messed up.” The regret of ruining the relationship permeates the song, and both voices do a great job of emoting the heartbreak.

What Notebook as a whole does is take us through a very personal journey. Not only do we get a peek inside Kyung as a boyfriend, we get his personal thoughts in the form of this album, which can also be seen as a diary. There’s also the huge difference between the laid-back feel of the album versus Kyung’s group work. In this solo, we get to hear variations on his signature rap style. And while he may not be winning any singing awards any time soon, his vocals add the special touch needed to make it purely Kyung. The only criticism I have for this album is that the majority of it is old releases. However, Notebook is already a contender for my favorite mini album of the year. 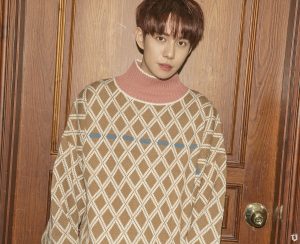 When Kyung is happy, especially in the Kero One produced tracks, you can tell. The music gets bubbly and joyful, like it can’t help itself. The horns are especially sharp and quick. Conversely, when he’s berating himself for messing up and is feeling regretful, the music is slow and deep, matching with his sadness. The music doesn’t compete with what Kyung wants to express, but instead enhances it. Kyung’s vocals don’t go super high, and they’re not the strongest either, but they emote well. Whether he’s singing softly or rapping, the beat and music don’t overpower what he’s trying to say, which happens a lot in ballads and pop love songs. Instead, the music is like a mood ring–when he changes mood, it changes feel so that everything works in harmony.

Fans of Block B and Kyung alike know that, underneath the grease and cheesiness, there’s this genuinely sweet person and that was what Notebook captured. Not only that, Kyung has established a sound for himself. It’s not the in-your-face, rap-heavy style typical of Block B, nor is it that almost too mature sound of Blooming Period. It’s playful and funny, yet completely honest. It makes you feel good inside. It’s great because it’s the essence of a person, the production is solid, and Kyung’s ability to tell stories through his lyrics make this an all around magnificent album worth multiple listens.