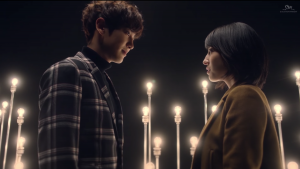 EXO is back at it with “For Life”, the title track of their special winter album of the same name. Like their past winter releases, “Sing for You” and “Miracles in December,” this is a ballad with the MV featuring Suho, Kai, and Chanyeol. This is perhaps owing to the fact that the other members were preoccupied with their own schedules.

The song itself is emotional and touching with a hint of melancholy; the gentle and sparse piano and strings accompaniment highlight the members’ vocals. I especially enjoyed D.O.’s and Chen’s vocals in this track – their vocal colours really suit ballad-style songs, and I also appreciated the fact that Chanyeol got to show off his amazing vocal skills as well. Although this track is not quite as Christmas-themed as some of their past releases like “Christmas Day”, the lyrics will undoubtedly melt your heart (and serve as great daydreaming material of EXO serenading and professing their love to you):

Giving you my heart and soul

Because you’re my everything in life, for life

Even if I’m born again

I can’t be with anyone but you

A thousand words are not enough to express my mind, for life” 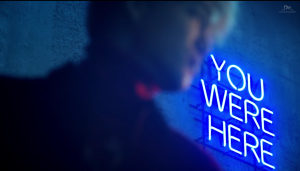 I must say, though, I had to watch the MV a few times in order to make some sense of it. Structurally, it’s split into scenes featuring different members with the female lead, who is Japanese actress Sakuraba Nanami. The first scene is with Kai as he exits an abandoned building and gets into his car to leave. As he walks out of the building, the shot focuses on a “YOU WERE HERE” neon light sign, which is an important symbol as it comes up again later in the MV. It perhaps serves as a reminder that EXO was once here; the past tense used in the sign implies that they have left. Kai’s leaving is made more prominent as the female lead returns a bracelet to him, only to have him drive away though not without a backward glance.

The MV transitions to Suho, who wakes up in a forest (a seemingly random setting). He realises that he is holding the same bracelet that was given to Kai – an alert that the bracelet is most definitely significant – and catches sight of the female lead running away. Immediately, he tries to chase her down, unsuccessful, and ends up in a white room as he stares at his own reflection in the many mirrors. It should be noted that at this point, I’m thoroughly confused as to what the plot is all about and why Suho goes from being in a forest to an empty room, but the MV is gorgeously-made with beautiful shots, so I’m not about to complain. 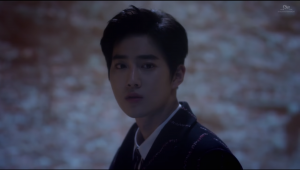 Chanyeol is up next as he encounters our female lead in a dark room with hundreds of street lights that immediately light up, strikingly similar to the Urban Light assemblage structure in Los Angeles. Just as Chanyeol puts the bracelet on the female lead and is about to kiss her, she wakes up in her own bed, implying that all of her encounters with the members were just a dream sequence. However, she realises that the bracelet is still on her wrist, and urgently rushes out in pursuit of the members. As she passes through the street lights, they switch off, perhaps signifying that Chanyeol is no longer there. She runs through the forest, rushing past Suho, and finally reaches Kai in his car. There, our female lead returns to bracelet, and Kai drives away. The final shot of the MV ends with the “YOU WERE HERE” sign flickering off. 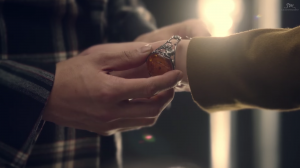 The neon light sign, which is the other major symbol in the MV, is a tangible representation of the memories of EXO’s and EXO-L’s relationship. Regardless of where EXO has been and where they will go, this connection will always remain, although this reading may be somewhat weakened by the past tense in the wording and the switching off of the sign.

This interpretation of the MV shows a warm and everlasting bond between the group members and their fans, which is quite fitting given the track’s lyrics. Although the plot isn’t too clear, I greatly enjoyed the aesthetic appeal of the music video which fit perfectly with the soothing title track of “For Life”. Overall, this release is perfect to listen to and to watch on a cold winter day!

What do you make of the music video for EXO’s “For Life”?