Big Bang is Consistent with "FXXK IT"

After what feels like forever, YG Entertainment has finally released the final installation to Big Bang‘s third studio album, MADE. Of the three songs that complete the album, “FXXK IT” is the perfect embodiment of Big Bang’s carefree attitude.

On one hand, the song feels a tad disappointing on first listen because it is exactly as how you would expect it to sound — so much so it runs the risk of tipping the scale towards mundane. On the other hand, however, this consistency might not be such a bad thing. Big Bang has clearly been able to develop a unique style and sound of their own over their ten-year career; they know what their fans want to hear — so why fix something that isn’t broken?

As with many K-pop songs, there is a slight disconnect between the lyrics and the music video. The video begins with all five members chilling on the floor of a living room, indulging in a watered-down, teenage version of debauchery. Cushions litter the floor, Taeyang plays with a guitar like he doesn’t know how to, and G-Dragon throws snacks at a sleepy Seungri. Meanwhile, T.O.P. and Daesung entertain themselves with the numerous rated magazines strewn across the messy space. The rest of the video continues along the same theme — the members goof off with one another in the living room, in a random park, and on the streets of Seoul in the middle of the night as the song goes on. They even hilariously attempt to ride a quintuple tandem bike. 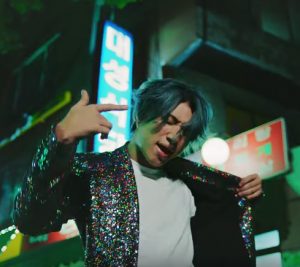 Further compounding this lighthearted, carefree demeanour is the video’s colour palette. This comes not just in terms of the vivid hues that tint that scenes, but also in Big Bang’s wardrobe and hair colours. From Daesung’s glittery jacket to Taeyang’s confused hairstyle (half-shaven, half in dreadlocks), the neon, glitzy, and outrageous reign. Also, particularly with the goofiness and silliness, “FXXK IT” is slightly reminiscent of the previously released “WE LIKE 2 PARTY“, but with less partying elements, obviously. Finally, the video concludes with the boys in a club, where they crowd-surf and just generally enjoy themselves without a care in the world, perfectly exemplifying the title of their song.

The lyrics, while also echoing the attitude of not giving a damn about anything, are a little more specific in context. In particular, they centre on the idea of a girl — a girl that the boys are interested in, at a club. In this context, the idea of “f***ing it” takes on various meanings. At first, Big Bang’s interest in the girl makes them nervous.

In a dark atmosphere, you’re like a single ray of light

This surpasses fluttering feelings, like I’m going through puberty

Your stealing glances, make my lips dry up

Haven’t felt this nervous in a while, I can’t do anything

So in the end, they decide to just f*** it and have fun with this girl that they’ve approached, throwing caution to the wind. As they continue the night with this girl, however, they soon realize that while they might feel incredibly attracted to her right now, these kinds of relationships are not build to last.

You come and go

So I’ll tell you straight up

In this corrupt dream, El Dorado

As such, Big Bang decides, again, to just f*** it and live in the moment, enjoying themselves for the night with this girl, even if it is only for one night. In the second part of T.O.P.’s rap verse, he also references the mythical city of El Dorado, fabled to be gilded in gold and abundant wealth, highlighting the impossibility of attaining true happiness within this single night. 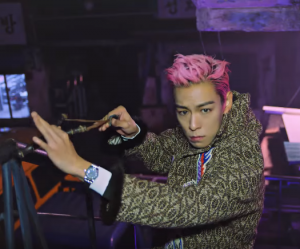 Admittedly, this track does grow on you with each subsequent listen. And even if you don’t like the song, the hard work that Big Bang has put in over the course of their idol career is plain for all to see. Taeyang’s and Daesung’s vocals are undeniably solid; Seungri, though not as well-known for his singing, is flawless in his delivery of the bridge. G-Dragon and T.O.P. each pull their weight in their respective rap verses, their lyrics constructed to flow fluidly and with remarkable acumen, even to the untrained ear.

So all in all, even if “FXXK IT” didn’t quite bring anything new to the table, the coherency of the music video, as well as the solid effort put into producing the track and the video serve only to prove just why they are the leaders of K-pop.