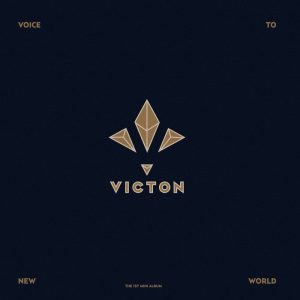 This is the year for company firsts. Plan A, A Pink’s label has finally debuted their first boy group. Victon dropped their debut mini-album, Voice to New World, digitally on November 8th featuring six songs. The seven boys feature a whopping total of six vocalists and one rapper: Seungwoo, Seungsik, Byungchan, Chan, Sejun, Subin and Hanse respectively, ranging in ages from Seungwoo at 23 to the youngest Subin at 18. They were teased by Plan A starting this past August, and have a variety show called Me and 7 Men which airs on 1TheK. They also released a pre-debut collaboration with Huh Gak, “Begin Again”, which had a really fun campground aesthetic. The boys continued with the bright neon aesthetic for their debut album styling, which fits well with the genre of the songs. The album maintains a 90s funk vibe to it through every song, and it tells the story of a a guy who’s being neglected by his girlfriend but he can’t help but stay with her.  However, between the songs there’s no real switch in style within the genre of the album, which leads to the songs almost blending into each other as the album progresses.

“What Time is it Now?” opens the album with the sound of a ticking clock that speeds up and merges into the synth backing as the song bursts into being. The song starts the album with a more fast-paced swing style retro sound than expected, drawing the listener in. The stripped down pre-chorus that builds up with a clapping sound effect behind the vocals brings a sense of ebb and flow to the song. Lyrically, it’s a pop song; the boys are singing about how they’re waiting for a 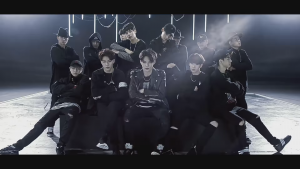 girl but they won’t keep waiting if she keeps playing them, keeping with the theme of the overall album. Sejun, one of the vocalists, starts off the song with a surprisingly deep spoken word section, which does a good job of setting up the feel of the track.

For a song that’s more fast paced than the rest of the album, that push-and-pull modality in the tempo helps “What Time is it Now?” stand out among the other funk tracks. Plan A also released a performance trailer for this song, as almost a pre-release for the album. The black monochromatic aesthetic of the trailer doesn’t really match the vibrantly colored style that Victon has had since pre-debut. But the video does emphasize the boys’ excellent dance skills for a rookie group.

The second track is the title track of the album, “I’m Fine”. The Korean title, “아무렇지 않은 척”, loosely translates to “Act Like Nothing’s Wrong”. Unlike the Big Bang song of the same name, this is not a raw, emotional ode to an ex-girlfriend. It’s the story of a guy who is hiding his emotions in front of his girlfriend, who isn’t really reciprocating the affection he’s trying to give her. For a song that is surprisingly deep, especially for a boy group’s debut song, the music does not match the lyrics, and neither does the MV unfortunately.

The song itself isn’t really memorable; it has the same retro pop funk sound as the first song, but with a slower tempo and slightly different instrumentation. There was also a lack of build in this song with the end never really reaching a clear climax. The song is sung in such a happy manner that it creates a disconnect between the lyrical aspect and the musical. The record scratches and the soft bell chords at the ends of phrases creates a softer sound than the snare and driving drums bring, preventing the song from being completely overwhelmed by the beat. The MV itself is very cute; they’re playing 무궁화꽃이 피었습니다 with A Pink’s Naeun as the female lead, with neon colors everywhere and a muted blur camera filter on the whole MV, giving it a playful vibe fitting the song’s genre. 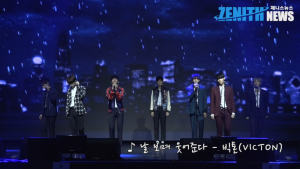 “Your Smile and You”, the fourth song on the mini-album, starts off as a ballad with an emotional piano backing very sincere vocals. The drums enter around the beginning of the pre-chorus, which lends the same musical style as the rest of the mini-album, but rather creating more of a slow jam than an outright ballad. Vocally, the song isn’t anything special. No member truly stands out in terms of tone, vibrato or range which, for a group with so many singers, is a little worrying.

Seungwoo takes the high notes during the chorus, and while he does manage to hit them, his vowel placement and tone makes it come across as kind of shout-like, though that may just be due to the vowels he’s singing on those notes.  What’s interesting to see is that even Sejun, the visual, and Seungwoo, who’s technically part of rap line, get equal singing time with the rest of the group, and are not relegated to just one line. The redeeming quality of this song is the background multi-voice choir during the chorus, which lends a little more of an identity to this song that’s sorely lacking one. Performed live at their showcase, this song has a bit of choreography with standing microphones which is always fun to see.

The final song on the album is the Victon-only version of “Begin Again”, their duet as Plan A Boys with fellow Plan A artist, Huh Gak. The song opens with a happy yet reminiscent acoustic guitar solo which transitions into a rolling pop song with all the instrumental quirks of the previous songs, yet here everything works. The whistle at the end of the chorus brings a sense of sad nostalgia, as it’s a sound effect that’s been used in K- 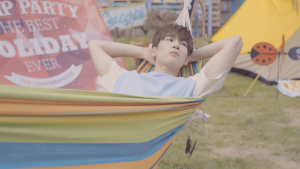 pop songs before. It’s a song reminiscing about a past lover and wishing to go back to that time, and musically the backing track works with the lyrics much better here than in other places, which is a fitting conclusion to the overall story arc of the album.

The MV has Victon setting up a campsite with Huh Gak as pseudo-Boy Scouts complete with gathering wood, playing with giant stuffed bears, trying to start a campfire and playing chess. With lots of gazing into the distance wistfully, light pastel coloring and hazy late afternoon sunlight, it adequately conveys the sense of longing that the song speaks to.

Overall, it’s a solid debut mini-album. The style of the album is consistent throughout every song, but the lack of variation between the songs creates an album that sounds like one really long song. Retro funk is a great musical genre to write in, particularly after the success of “Uptown Funk” in the US, but when everything is retro funk, it loses the fun and novelty of the concept. Most of the songs don’t have a catchy hook to pull an audience in, which would be key in gaining an international fandom early on. The boys themselves are cute and funny, particularly in their variety show, which everyone should watch; they embody the playful yet earnest boyfriend concept well as a rookie group. Victon still have a long way to go from here, but hopefully they’ll trend onwards and upwards.