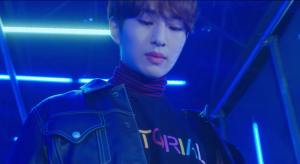 Shinee is back with their new repacked album and MV for “Tell Me What To Do.” The MV is a huge aesthetic departure of from past Shinee videos. The lyrics narrate the one-sided efforts to keep a dying relationship together with their partner who can’t, or maybe just won’t, communicate with them. The tone of the song isn’t just melancholy, but also has an echo of longing.

This is complete 180 from their last MV and song, “1 of 1,” which tended to Shinee’s more signature style: upbeat and playful, with funky synths and imperfect voices that generally distinguish the group.

“Tell Me What to Do,” takes very non-traditional Shinee elements and uses them in the beat, like the looping acoustic guitar combined with the EDM influenced synth. There’s a constant rise and fall in the vocals, from layered harmonies to stentorian tones that makes the song incredibly interesting to listen to. Onew, Jonghyun, and Taemin really deliver on the belts and it’s great to see such consistent growth within a group.

The constant repetition of “tell me what to do” has an interesting effect, as it’s first said rather hushed and haunted, before it begins to build in intensity and the chorus boils into strong, soaring vocals. At the same time, however, it can sound redundant and almost sort of boring. The EDM synth almost feels counterintuitive to the emotional and solemn content that the song’s narrative provides. “Tell Me What to Do” falls somewhere between a ballad and a dance song; and while it’s interesting to listen to, it’s also kind of confusing.

The lyrics themselves aren’t incredibly creative or deeply profound, yet they still provide a great narrative. “Tell Me What To Do” depicts the painful process of a relationship falling apart, and the way that people will try to fix something that they can’t, without or without their partner. The constant repetition of “tell me what to do” communicates the sort of desperation that comes up when a couple stops communicating properly and when one person stops trying.

Shinee sings about what it’s like to be the person trying, and the way that it hurts. It’s a very grown up narrative on love and relationships, and one that often goes overlooked within the love song genre. There are plenty of songs about falling in love and what it’s like after breaking up, but very few songs actually address why a breakup is happening.

The tone of the song certainly suits the general aesthetic of the MV, with the dilapidating building complex and the cool, solemn filter. There are some beautiful shots; the empty lots and the shots of outstretched hands are especially poignant. Similarly, the shaky camera work at the car on fire is cliche, but it’s still compelling in its chaos. The shot of Shinee drinking focuses on Taemin’s experience and uses the shots to convey the sort of hazy chaos that he must be feeling; the shot is blurred and the colors are compellingly lurid and he’s alone as the audiences see clips of the way Taemin looks at the girl. Combined with the throbbing chord progression of the song, it evokes a sense of longing that sits at the back of the throat. 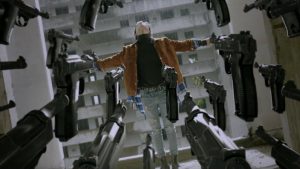 While it’s easy to appreciate how grown up this video is at some points, it’s also hard to ignore the inconsistent cuts, transitions, and zoom-ins. The opening zoom-in on Taemin is poorly shot and doesn’t really serve any sort of purpose: it is neither visually compelling, nor does it contribute to the narrative.

In terms of lyrics and narrative, there’s a gap between the two that distracts from the music and ends up confusing the audience.  The plot seems to be about how Taemin is jealous and in love with Minho’s girlfriend and they have a huge fight over it. The argument concludes before Minho and his girlfriend drive away and their car tragically explodes in a horrible accident. How exactly the on-screen tragedy matches up with the content of the song is hard to say.

Overall, Shinee took a mature route with this song, and their musical choices are not only experimental, but still retain distinctive elements that are very Shinee. The video is visually compelling, but it’s riddled with confusing and poorly shot moments that don’t help the already jumbled plot. Hopefully, Shinee’s future releases will have more cohesive videos to accompany their consistently impactful songs.