Shinee‘s back and more retro than ever with their latest, “1 of 1.” I’m pretty sure everyone knew what we were in for when SM flooded us with teasers of the members in colorful suits and gold chains, alongside the track’s classification as “new jack swing.” Yet, Shinee still managed to surprise with exactly how much they committed to the concept, for better or worse.

I’m not going to put on any airs and pretend that this comeback isn’t a little embarrassing, because it is; but it’s executed in the most exquisite way. Watching the MV for “1 of 1” is like looking back on my youth: on the outfits my mother forced me to wear and the patterns that have become extinct in contemporary fashion for a good reason. Yet, it’s exactly those qualities that endear me to the comeback. It’s nostalgia at its finest. Shinee — and SM — give it their all from the choreography to the editing of the MV. They also manage to do so without falling into the trap of parody, and with aesthetic flare to boot.

The MV is pretty straight forward: boxy and visually pleasing, just like we expect from SM. The members wind their way through a sea of female extras between cuts of Jonghyun, Key, Minho, and Taemin dancing. Keeping with the ’90s aesthetic, there are overlays of the members in geometric cut-outs and a violently green background, while the close-ups fade into a more grainy texture for added affect.

SM’s visual directors adopt the color pallet of the ’90s quite well, sticking to mainly primary colors with the occasional flash of greens and browns against a crisp, white backdrop. In the era of pastels and soft focus, it’s refreshing to see such saturated bursts of color in a MV. There’s even more to appreciate when the primary colors are used to distinguish the members, giving each individual cut its own flare. 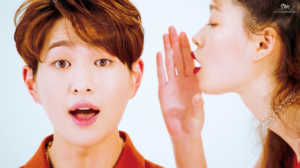 The colors and violent patterns also remind me a bit of retro upholstery. Which brings me to the main irony of the MV: “1 of 1” is lyrically all about the members seeing only one woman who stands out in the crowd; yet in the MV, the female extras appear much more like furniture than objects of affection.

The female extras come in multiples and blend together, only to be distinguished by the primary colors of their wardrobe. While the use of color coordination makes for some nice aesthetics — like the rows of women blending into one another during the bridge — it also renders the females themselves little more than colorful, indistinguishable props. In no way am I trying to rag on Shinee or SM, but there is a bit of a disconnect between the message of the track and the content of the MV.

The real highlight of the MV is just how much the members appear to thrive within what could easily be labeled a tacky concept. I don’t think I’ve ever seen Minho look as confident as he does dancing in mom jeans and a colorful checkered jacket. Taemin also booty shakes for all it’s worth during the chorus; Key dons a bucket hat so confidently that I almost forgot about when Exo tried to make bucket hats happen (again) two years ago; and Onew and Jonghyun are nothing short of charming in their well-tailored suits.

The choreography, even, is fun and dynamic. It’s derivative enough to maintain a ’90s flare, but with a touch of contemporary Shinee to make it distinctive and impressive. I can’t wait to see Onew participate in the comeback stages, since he was left out of the dance sequences in the MV due to his injury.

Looking to the track itself, “1 of 1” is the kind of quality I’ve come to expect from a group like Shinee. Even if it isn’t my favorite Shinee release — early ’90s pop hits have never been a favorite — it’s still executed in a way that’s hard to find real fault with. 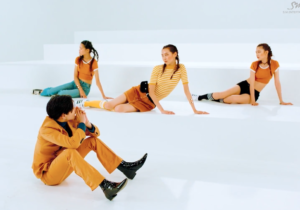 What’s nice about Shinee’s exploration of the new jack swing genre is that, while the backing track is familiar, the melodies layered over it are contemporary and unquestionably Shinee.

Even eight years in to their career, Shinee continue to change-up their vocal arrangements and part distribution. In “1 of 1” Minho and Key are not only handed almost an entire rap verse, they’re given significant vocal lines as well. Jonghyun and Onew shine with their distinctive voices in the remainder of the verses (Onew’s falscetto continues to amaze), while Taemin continues to prove his vocal prowess by taking on both the intro lines and a good portion of the bridge. In the chorus, the five members come together with the help of some pretty fantastic vocal layering that fills out the soundscape much more pleasingly than the ’90s tracks the song draws its inspiration from.

Shinee never settles for a formula that works, and that’s one of the most appealing aspects of their group dynamics. Each member has the potential to shine in a new way each comeback, and no single member is written off or pushed into a specific box.

The new jack swing genre is a new turn for both Shinee and SM, but I imagine this comeback plays a larger role in SM’s musical forecasts for the next year. Shinee is the group that SM experiments with because they’re one of the most adaptable and dynamic units in K-pop. Their quality and teamwork is nearly unparalleled, and they have the ability to introduce a plethora of concepts without ever making it feel like the concept is a poor fit. SM can hand Shinee nearly any genre, and they’re guaranteed results because Shinee is that dependable. 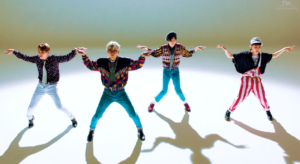 “1 of 1” is by no means the first new jack swing track to appear in K-pop, but you can almost bet that after Shinee works such a concept, you’ll see traces of it pop up a lot more in SM releases. It’s the same pattern that happened last year with the house genre track “View” that paved the way for f(x)‘s “4 Walls” and Exo’s EX’Act.

Overall, “1 of 1” marks another quality release from Shinee — as if we’ve come to expect anything less. Yes, it’s a bit embarrassing and cringey. But, it’s embarrassing in the same way that watching old home videos is: familiar, entertaining, and overrun with nostalgia. Shinee and SM approached the 90s concept from a fun perspective, and managed to avoid being tacky to the point of mockery. I won’t say this is my favorite version of Shinee, but Minho’s owning of this concept is more than enough reason for me to love it regardless. That man was born to rock a pin-stripe suit and gold chain.

Readers, what’s your favorite moment from the “1 for 1” MV?