Exo Upgrades Their Mood and Sound With "EX'ACT" 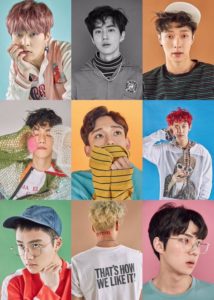 The boys of Exo have returned with their third studio album entitled EX’ACT. With this new album comes an upgrade to the group’s music in an attempt to test new waters. It may not be common for a group of only four years to want to change their sound without losing their niche, but that’s exactly what Exo has done. The upgrades aren’t just about the music, but the lyrics as well.

“Lucky One” is the first upgrade Exo displays and is the first track on the album. Ironically, the song sounds like a remastered version of “Lucky” from their album XOXO. The lyrics generally talk about the same thing: how they/two people through their destined meeting are fortunate to have found you/each other. The only difference is that “Lucky” comes off more as a first love in all its euphoric glory while “Lucky One” has a mature sense in its delivery.

Exo’s next upgrade comes in “Monster” which is “Wolf” 2.0. Based upon lyrical comparison alone, “Monster” sounds more vicious.

Initially, it is hard to tell which lyrics are more disturbing, but “Monster” wins this medal. In “Wolf,” the ‘wolf’ is trying to accept the change within him but in “Monster” the ‘monster’ is looking for acceptance from his prey. With “Monster” I feel I’m listening to 50 Shades of Grey in song form which makes me feel extremely uncomfortable. Because of that, I feel like I should hate this song, but I cannot stop listening to it. At least it is pleasing to the ears composition wise, unlike “Wolf”.

What probably sounds more like a typical Exo promoted single is “Artificial Love.” There’s a catchy beat and easy to sing along lyrics with the chorus. The singing and talking in the background doesn’t distract from the song but enhances it. While this doesn’t outright fit in the upgrade theme, it’s more so a somber follow up to “Overdose” considering the boy in love with knowing there’s something wrong but still yearning for more premise in the lyrics.

The next track is “Cloud 9” which doesn’t have the nicest of intros to compliment the song. It sounds very displaced until you hear it multiple times later on in the song. Even then, there is a sense of a strong disconnect between Sehun’s only lines in the song and the sung lyrics.

And like the songs before it, “Cloud 9” retains an elated feeling similar to “Love Love Love” from Exo’s Overdose album.

So while it feels as if Exo stepped away from the giddy boy in love which was prominent in their previous releases, “Heaven” reprises that. It mixes in the same feelings in “The Star” and “First Love” off their Miracles in December and Love Me Right albums respectively. There’s a small hint of similarity of the lyrics and tone in comparison to “Angel (Into Your World).” Sure why not? We’re in “Heaven” after all.

Even the lyrics “I keep laughing for some reason every night. Even when I close my eyes, I can’t sleep. I spend the entire night with thoughts of you” are easy to visualize. If you’ve ever fallen in love for the first time, there’s that sense of being so happy you’re beside yourself. If you’ve never experienced love, this song lays it down as to what it’ll be like. If you have or are, then you get to reel in the feels from the first time.

The album wouldn’t be complete without some sort of breakup song. This is where “White Noise” comes in. Although breakup songs tend to be somber in beat, this one isn’t. The pacing of the song helps to convey that it’s not an upbeat song and has a hollow and empty feeling to it. The song in of itself is simple, doesn’t have too much going on as far as background noises and the lyrics build the emotion of a lost love.

The next track is “One and Only” and it starts off on the wrong note. Right at the beginning there’s a blaring horn, followed by the techno clap noise, and random pauses.

There is the slight maturely shift in the lyrics, but there’s a bit of disconnect between the melody and the words. It sounds like a love song, but talks like a softer version of Vixx’s “Chained Up”. Both songs generally express being in or rather, trapped in love with someone, how they’re okay with said situation, and hints of obsession from both ends.  Exo and Vixx say the same thing, but in two very different ways.

Exo would not be Exo without some sort of controversy. But thankfully this time around, it didn’t blow up in a war, but peace between Army and Exo-L. People noticed how Exo’s “They Never Know” and BTS’s “Dead Leaves” sound similar to the one another. That might be because the music sample is from the same song, “Deadroses” by Blackbear.

Despite the comparison issue, this song had the potential to be a lot better. What distracts this song and brings down the quality is the lack of clarity in the English lines. There is more English in this song than you probably realize or even understand.

Finally, the album finishes it up with most of the vocal line singing “Stronger.” Only D.O., Suho, Chen, and Baekhyun participate in this song with a questionable Chanyeol in two sections, giving it a feel of “Baby Don’t Cry” and “My Answer” from the previous albums.

The song’s impression is simple: a place to call home in a significant other. Support is more than just being there for someone physically, but emotionally as well.

It may not be as vocally strong as “My Answer” and “Baby Don’t Cry”, but the quiet tone and smooth melody get the point across that will leave you smiling at the end. The lyrics are meaningful and probably more so if you’re in a relationship.

The more Exo seems to grow (and cough— lose its members), the line distribution improves. There’s a lot more Suho, Sehun, Lay, and Xiumin on the Korean side of this album. Kai has majorly stuck with singing instead of trying to do that and rapping. Chanyeol has pretty much switched places with Kai in that regard. And there’s a lot more English in this album in previous ones.

What this album was lacking was rapping from Lay. I was impressed with the role they gave him in “Love Me Right” and sort of wished for more. Sadly, my prayers were not answered.

Overall, Exo has achieved having a more mellow side of their tone. This goes against their normal booming nature. The album itself has a mellow tone but because of that, “Monster” is the only song that sounds like it doesn’t belong on the album. It has a slower tempo then “Overdose” and “Call Me Baby”, but considering the rest of the songs on the album, it doesn’t seem like “Monster” fits. 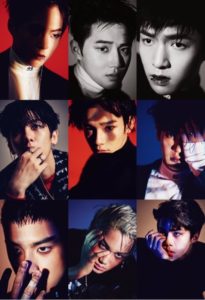 I guess Exo is trying to “grow up” with seemingly mature sounding lyrics and not going crazy with the pop sound people are using to hearing from them. The upsetting thing when it comes to this group is that a lot of people don’t take them seriously. So while this album might be in an effort to try out a directional change in music and quality, people may still laugh at this attempt.

But, if the change in music and lyrical quality is what Exo was looking to achieve, then they definitely have succeeded. If I wasn’t familiar with their voices, one could easily convince me this album wasn’t put out by Exo.

What did you think of Exo’s album? Any songs on the album that are your favorite?