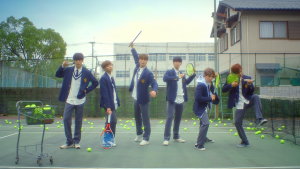 With cold weather on the horizon, sometimes what you need is an upbeat song to ease the transition. Astro‘s new song, “Confession” is exactly this kind of song and so is its MV.

Astro continue with their quirky and kooky MV concepts; instead of being soda bottles, they’re characters in their protagonist’s manhwa. We first meet the protagonist having her confession rejected and then finding a drawing of Astro that she presumably drew. They come to life and start following her around as she starts to get over her crush.

It’s delightful to watch Astro act as the young girl’s escape. They trail after her in their school uniforms, peeking out from behind tables, watching her draw on the train. There’s a wonderful scene where she draws them doing different activities and they act them out, before she erases what she drew and surprising them. At the end we see each member standing in front of the protagonist, ending with Eun-woo, possibly making his own confession.

The visuals are wonderful; with bright colors and carefree scenarios, it is a welcome change. It follows a similar formula as all of Astro’s other MVs, but it is still fun to watch. It’s fun to move from one scene to the next, cutting between the members following the protagonist and shots of the group dancing and running around. It suits the overall vibe of the song, matching with the playfulness. Astro is known for being adorable and play that up well in “Confession.”

The song itself isn’t exactly groundbreaking. It’s sugary pop at its finest and it makes me want to never stop listening to it. The lyrics are also a bit common. They describe their desire to take care of their crush and talking about how well they would treat their crush. During the chorus they sing:

I’ll warm up your hand from this sudden cold
With all my heart, I’ll blow hot air on them
Wanna be mine forever?

It’s cute, but not exactly original. The lyrics are all similar to other songs about pining over a crush who doesn’t seem to notice you. It doesn’t make “Confession” a bad song, just one we’ve all heard before. 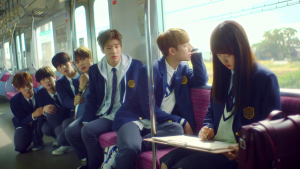 Overall the song is fun, catchy, and just plain delightful. Both the MV and the song complement each other well. The only real negative thing I have to say about the song is the ending. It ends on a leading-tone, leaving the song feeling incomplete.

This ending is also reflected in the MV, with Eun-woo standing in front of the protagonist with two tears falling down his face, crying because he’s still just a drawing to her. It’s an interesting style choice and maybe it makes more sense in the album. Either way, “Confession” is fun and continues to show Astro’s strength in being adorable.

Readers, what did you think about Astro’s “Confession?”