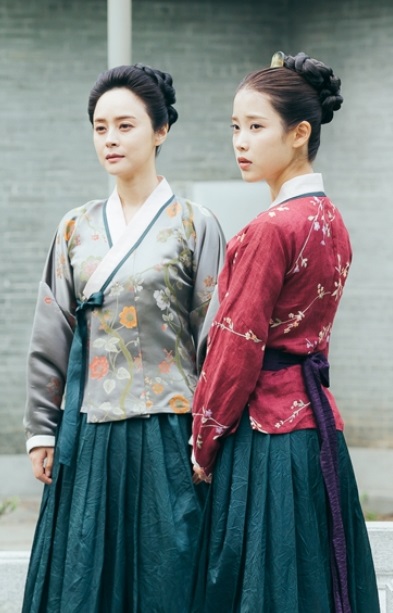 In the same way a smart and greedy prince has been poisoning the new king’s bathwater, Moon Lovers has been using the first ten episodes to set everything in place for an action-packed second half. Whether it needed that much time is up for debate, though, especially since the really good moments Moon Lover offers up are almost drowned out in the rush to cram everything into the remaining episodes.

Episode 11 is basically one hour-long good moment, bringing the emotion as the palace reeled from the attempted assassination of Crown Prince Mu (Kim San-ho). So (Lee Joon-gi) demonstrates his love for Ha-jin (IU), Mu, and even his mother, through sacrifice; King Taejo (Jo Min-gi) is humanised through a passionate defence of his choice of heir; and Head Court Lady Oh (Woo Hee-jin) serves as the beating heart of the episode with her love for King Taejo, her righteous anger towards Queen Sinmyeongsunseong (Park Ji-young), and her sacrifice to protect Ha-jin. Moon Lovers has to fit in a lot of exposition to make it work, but manages to succeed in engaging me emotionally — I rode the full roller-coaster of emotions in that hour.

Episode 13 also provides a similarly emotional experience, centring on King Taejo’s death and the race to ensure the Crown Prince is installed as the new king — a task that ends up falling on Ha-jin’s shoulders. But even while the political scheming and manouvring thrill and intrigue, we are also there for the personal moments, be it something small like the princes remembering their father as a father, or bigger moments like Ha-jin’s faith in Wook being shaken by his newly unleashed ambition.

Though Princess Yeon-hwa’s (Kang Han-na) assassination plan is derailed by Queen Sinmyeongsunseong, she is able to make it out without stirring suspicion. She does, however, succeed in forcing Wook (Kang Ha-neul) to turn his back on Ha-jin, forcing her brother to put family before love. She also pushes Wook towards power, though the decision to actively pursue it is Wook’s alone.

Lady Oh notes as much when he approaches her for help; and in episode 13, Ha-jin comes to realise this as well, finally seeing past Wook’s justifications for seeking power and ending their relationship. This is one of my favourite scenes, because Ha-jin’s decision is fuelled by her desire to do the right thing and unwillingness to abide by those who do not, a character trait that has been highlighted since the first scene of episode 1. It informs her support of Mu, her fear of So, and also her love for Wook — he was always lauded for being just and fair. But in his quest to be with Ha-jin, Wook did the very thing that would drive her away. And for all of Wook’s jealousy over So, the latter ended up having nothing to do with Ha-jin’s decision. 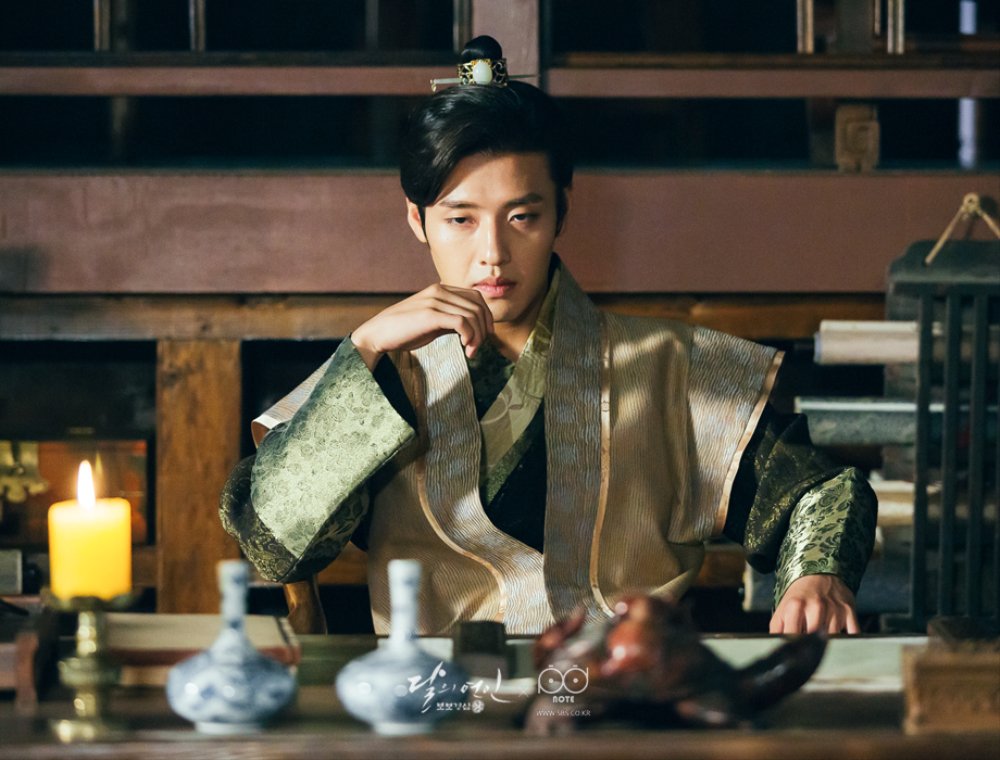 Wook is now truly one of the bad guys, dressing in finer clothes, scheming with sleazebag 9th Prince Won (Yoon Sun-woo), and maintaining a persistent stare through half open eyes that I find a tad overdone. We get it, Kang Ha-neul, you’re character has become morally bankrupt and is now empty inside. His smarts also make him more evil than most of Moon Lovers‘ villains: double-crossing Yo (Hong Jong-hyun) to play the hero is pretty smart, as is emancipating Chae-yrung (Jin Ki-joo) just so he could use her to slowly poison Mu AKA King Hyejong.

Wook even manages to get away with the poisoning because new Head Court Lady Ha-jin fails to notice that something is awry. But mention of abdication sends the king into a tailspin, causing So to swoop in and save the day; though his reasons for marrying Mu’s daughter are both personal and political.

Yeon-hwa is also blindsided by a newly resurrected Yo, now King Jeongjong. His anger at Wook’s betrayal means she is threatened with exile instead of the marriage offer she was expecting. The princess doesn’t give up easily, however, and manages to get out of her unwanted marriage by turning in Prince Eun (Exo‘s Baekhyun). Now, So will have to execute his brother, or risk Yo harming Ha-jin (seems King Taejo was right about not wanting the princes to get attached to her). It’s clear that Ha-jin still fears So’s potential murderous rampage, and while her conversation with Soon-deok (Z.Hera) encourages her to have more faith in her man, she doesn’t go exactly for full disclosure. 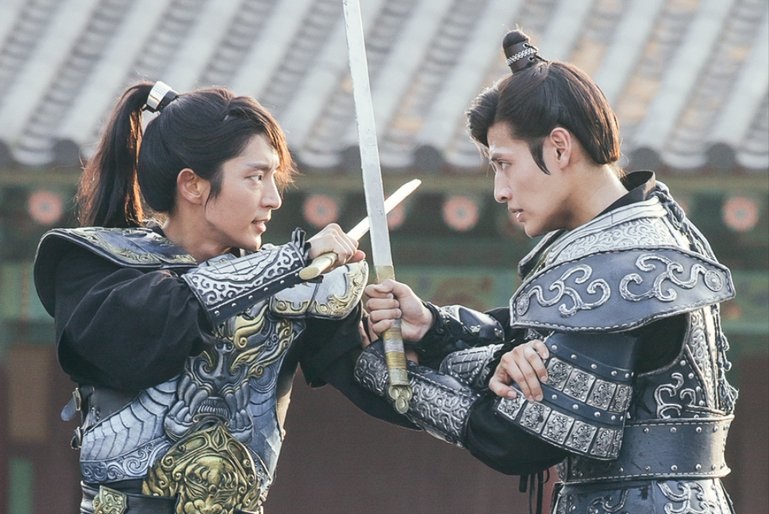 It’s especially interesting to note that Ha-jin’s vision of Mu dying in a bathing pool wasn’t because of So at all, but Yo (and Wook, and Won, and Chae-ryung, the latter of which seemingly escapes Ha-jin’s suspicion). It’s possible that Ha-jin’s visions aren’t as accurate as they seem. There is a moment in Episode 13 where Wook and So’s discussions with Ha-jin and Yeon-hwa, respectively, are shown concurrently to highlight the difference in the two male leads. While both essentially say that they would claim the throne for love (for all its intent with the mirroring device, this wasn’t the best dialogue moment), we also see that for So, the throne would just be means to an end; and though Wook says the same and tries to be noble about it, it’s clear that the throne is the goal itself.

Alternatively, this could be another case of the production letting us down. I have a distinct feeling that all of these visions are going to end up being gotcha moments, with the actual event playing out very differently to how it’s being presented in vision form. It was probably meant to be a smart idea that turns Ha-jin — and our — perception of the future on its head, but we are given little insight into what she herself thinks of these visions (beyond her fear), or if she even realises that her vision turned out differently than she expected.

I can’t tell if Ha-jin’s lack of action is because she is heeding the advice of Astronomer Choi (Kim Sung-kyun) and King Taejo to not get involved, her new station as Head Court Lady has taken up her time, or if the drama has dropped that particular ball. The drama makes a few attempts to highlight Ha-jin’s time traveller status, but for the most part her past (or is that future?) isn’t as big a factor as I imagined it would be. Apart from her sheet masks, the most modern thing she’s done is sharing her views on marriage with Yeon-hwa. Oh, and not recognise mercury poisoning, since that is less common in the 21st century. 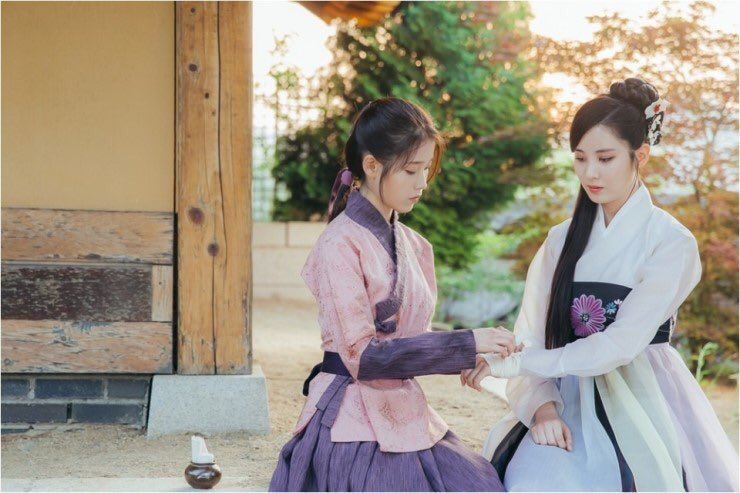 Related to the editing, is the issue of pacing. While I appreciate that time needed to be taken to set up events in later episodes, I do feel that Moon Lovers did not use its first half effectively enough; because even though these last few episodes have been jam-packed with action and intrigue, there are still moments of underdevelopment that are underscored by the multiple time jumps. The building of Ha-jin’s friendship with Woo-hee (SNSD‘s Seohyun) is skipped entirely, as is 14th Prince Jung’s (Ji-soo) maturation into a warrior harbouring a huge crush on Ha-jin. I trust that Jung will play a bigger part in the final episodes, while I wonder what exactly Woo-hee brings to the table, other than giving Baek-ah (Nam Woo-hyuk) a reason to feel man-pain .

At least the drama remembered to fit in a few scenes between Soon-deok and Eun, amping up the cute factor to make their imminent demises that much sadder. But I can tell you now that any sympathy I feel will be for Soon-deok. While Baekhyun isn’t as bad as netizens make him out to be (the writing is also at fault), Z.Hera was able to make a greater impact with less screen time — though, the fact she wasn’t playing an entitled brat didn’t hurt.

With five episodes remaining, there is a lot left to reveal — the first of them being So’s realisation that the other man she loved was Wook. I am also keen to see how well Moon Lovers manages to tie things up. The original Chinese drama was 35 episodes long, while Moon Lovers is has only 20. If the drama had used its time better and packed more into the first ten episodes, we may have not had to miss out on some of the character development, and we may not have had to go through two time jumps within three episodes. But if the last few episodes can reach the bar set by episodes 11 or even 13, then I will consider Moon Lovers a qualified success.