Ailee's "Home" is Mature and On Trend

Ailee‘s new single, “Home”, marks a turn to a grittier version of R&B. Known for her soulful, powerhouse vocals, the singer’s previous releases (like “Mind Your Own Business“) have tended to be more pop-centric. “Home,” though, is decidedly more mature both in visuals and sound. It’s darker and follows the trend of trap-inspired tracks in K-pop, less slow jam and more alternative R&B.

While R&B isn’t new territory for Ailee, the edgier vibes are. With a back beat perfect for body rolls and grinding, Ailee gets to show how she’s grown as an artist with this song. It’s less bubblegum and more serious. Her voice still is the focal point of the song, but instead of Ariana Grande style runs, she sounds more like Tinashe, or even Dean.

“Home” is very on trend, with many artists putting out tracks that are darker and with heavier trap influences this year. While it may not be original, Ailee brings her own flavor to the style. She rides the melody through the whole song, easily transitioning from the lower parts to the higher notes during the chorus. The addition of Yoon Mi-rae‘s verse compliments the rest of the song. The rapper rarely disappoints with her music; and while she’s not in the song for very long, she easily fits in. 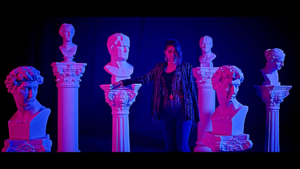 Lyrically, “Home” is about the longing that comes after a break up. Ailee’s wondering how her past lover is doing, asking them if they’ll consider coming home to her. She’s wishing that they will return to her and they can have the life they once shared. During the pre-chorus and chorus, her desire is clear:

It’s definitely sorrowful, but she’s also resigned to the fact that she’s alone without her lover. Outside, she’s trying to do well on her own, but she wants so badly for them to come back. Yoon Mi-is rae’s verse echoes these emotions; she opens her verse by saying, “I’ll not regret/Don’t look back/And just let go.” She further emphasizes the feeling of abandonment Ailee is expressing. 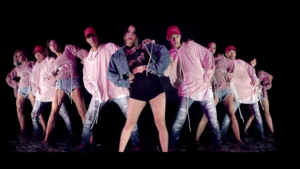 Visually, the MV is gorgeous. With dark, over-saturated hues and contrasting bright colors, it reflects the overall tone of the song. There is not much of a plot; it’s mostly Ailee posturing or dancing with her back up dancers.

There are a few moments during the dance portions where the formations and choreography are very reminiscent of Beyoncé‘s “Formation.” It looks great and works well, even if there is no intentional imitation going on.

Overall, the MV is nice to look at and the song is easy to listen to. The more mature sound makes me want to check out the A New Empire mini album and see how it differs from her previous work. It is a solid comeback for an artist like Ailee.