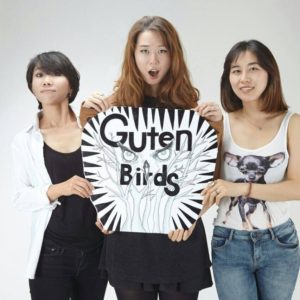 Have you ever been so enchanted with a band you’d move the stars to see them every single time they perform? That’s basically what happened when I saw this trio of ferocious ladies at South by Southwest this year.

Story time! I took the bus to Texas, a 25-hours ride to get myself to the five-day festival that would irrevocably change my life. Literally four hours before I needed to be at the Greyhound station to take the long ride home, I changed my ticket and ate the extra cost just so I could see this band’s last performance on the unofficial last day of the festival (where a few bands stayed around to give performance or two for remaining festivalgoers).

Colluck Music’s Guten Birds is an all-female punk trio from Seoul that makes music that, quite honestly, takes your soul on a journey. Corny as that sounds, you will seriously find yourself soaring to another dimension. They have shades of groups like The Pixies and The Go-Gos—when The Go-Gos were truly punk. There’s power and fearlessness in the sound, lead singer Mohho’s voice at once guttural and incredibly soulful, Seo-hyun bringing so much depth and belly to the Guten Bird sound with her skillful mastery of the bass, and Mui leaving her entire being on the stage as she wails on the drums.

While their punk undertones are very present, the band has so much heart. There’s a serenity that haunts the edges of their very raw sound. Tracks like “Throbbing Night” showcase just how cosmic the band can be.

There are moments of such delicacy in their music you wonder if maybe they’re attempting to express an ache that perhaps in their daily life they’re incapable of letting out. Their performance space is very contained, no wasted movements or flamboyant displays, just a quiet intensity and an oddly soft humility that truly belies the heart and growl of their music.

That shouldn’t suggest, however, the band takes itself too seriously. One of their most popular tracks, “Swimming with Dolphins,” is proof that these ladies have a somewhat childlike sense of humor, a silly charm that embraces the audience and even invites them into their world. “Swimming with Dolphins” was a highlight of both of their performances at SXSW, a real talking point being the inflatable dolphin headgear they donned during the entirety of the song (Seo-hyun wearing hers for the duration of their set afterward).

Tracks like “Swimming…” and “Dance on the Hill” show a lighter side to the heaviness that can sometimes overcrowd some of the genuine poignancy of post-punk and alternative. They don’t shy away from who they are or even from the more fun-loving aspects of their personalities. It’s a trait that endeared me to the band quickly. But it was the music that had me riveted and truly dazed by their brilliance.

The song that truly took me to another plane, however, was their most recent release, “Across the Black Tunnel.” There’s something truly sublime about the music in the piece. The sound is very obviously post-punk—aggressive, drum-heavy, powerful. But at the periphery you get the feeling there’s a deeper emotional connect between the band and their music. Mohho’s voice is so dense with emotion, you feel the ache in her heart, as if she’s reaching inside you and forcing you to get in touch with the deepest parts of yourself.

The Guten Birds will remain one of those bands that I always have my eye on. There’s something truly special and unfettered about the band. They’re wholly honest with themselves and their audience. While there are no wasted movements or ostentatious shows of ego, they certainly don’t hide who they are and what they’re about. That honesty is verily felt in their music and in their stage performance.