9 Muses A Tries but Ultimately Disappoints in 'Muses Diary"

9 Muses has never had the greatest luck in the world. Debuting with the memetically bad “No Playboy”, they’ve been lingering in nugu-land since 2010. Through the years, they’ve assembled long lists of both under-appreciated music and former members. Following the  loss of Euaerin and Minha, Star Empire decided to debut a sub-unit rather than have a full comeback. Called 9Muses A, the hopes for Sojin, Keumjo, Hyemi, and Kyungri were not very high. And while Muses Diary exceeds initial expectations, the fact is despite standout lyrics, the mini as a whole is forgettable and ultimately disposable.

Muses Diary faced some serious issues right off the bat. Namely, a lack of standout vocalists. I adore 9 Muses, but let’s be real here: the most complementary thing one can say about 9 Muses’ vocals is that they’re stable. No one has an impressive range on either end, and everyone’s voice always sounds thin and delicate. However, Muses Diary attempted to compensate for inherent weakness with good harmonies and solid production, both of which are old tricks. The vocal harmonizations are lovely, taking advantage of the similar ranges of each member and weaving them together in a way that isn’t jaw-dropping, but not something anyone can deride, either. 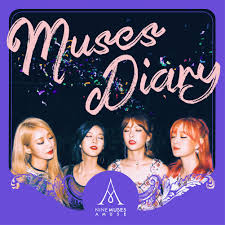 On the other hand, the production for Muses Diary is a letdown after the first couple of litens. The musical theme for the mini is blindingly 80s synthpop — a familiar sound for 9 Muses. Most of their recent releases have been synthpop, as it has a slick, polished sound and requirements for clean rather than powerful vocals make it a good match for any group with less-than-stellar singers. The 80’s sound is played up, with “Your Space” sounding more like the genuine 80s than anything 80s inspired. The faux strings of “Shh” and bounce of “Lip 2 Lip” have some real groove to them, matched by the energy in the vocal delivery and tension in the songs themselves.

And despite all that, despite my love of 9 Muses and 80s synthpop, I disliked Muses Diary more and more with each listen and I could not figure out why. Until, on listen 20, it hit me: this entire mini has no low end. The production never dips into the bass range for longer than a couple notes, and its absence ruined Muses Diary. Without a significant low end, everything sounds half-finished — because we expect to hear the entire musical spectrum covered in songs — and unbalanced, which it is. The low end is the musical foundation of a mix, and without it, Muses Diary sounds unstable. Plus, four ladies always singing in the higher end of their vocal registers married to production that rarely goes below middle C becomes very cloying, and very annoying, very fast.

The failure of the production becomes even more tragic after reading the lyrics to Muses Diary. While not labeled a concept album, there is a clear and interesting narrative present. Intro track “Your Space” serves a dual function, one that only becomes clear after hearing the entire mini. At first, “Your Space” seems like nothing more than the set-up for “how 9 Muses A got here”, with them telling their boyfriend they want to give him space before backing up to see how this relationship crumbled. 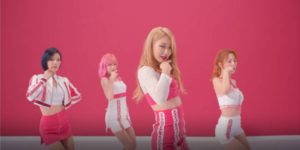 The narrative proper kicks off with “Lip 2 Lip”. 9 Muses A meet a new boy, and begin to flirt, charm, and connive their way into a kiss, and presumably, a relationship. The coy, fun ride crashes to an end, though, when they learn that said guy is actually dating a friend of theirs. Yet what appears to be a throwaway joke for the MV is actually followed up on in the next song.

“Shh” revolves around the conflict presented by “Lip 2 Lip” of liking your friend’s significant other. As much as they try to do the right thing, the ladies decide to follow their hearts and go after the guy they want, eventually succeeding. They know it’s wrong but all they care about it what they want right now. The twisting of “follow your heart” from a push to break free from others desires into a self-rationalization for selfish behavior is particularly delicious.

Of course, as “Monster” makes clear, guys who cheat and/or dump their girlfriends for you are not exactly stable boyfriend material. They’ve been left high and dry, dumped for the next girl who came along. They’re unable to move past what happened, though rather than still having feelings for him they just can’t seem to let go of the hurt and subsequent hate. 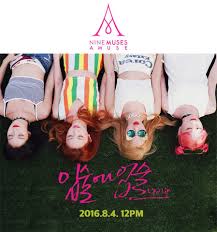 The story told, from the flirting to the inevitable heartbreak, are a complete 180 from the usual K-pop girl group. Suddenly, “Lip 2 Lip” becomes the prologue to drama, an indicator of the narrator’s self-centeredness. “Monster” becomes in exercise in schadenfreude as 9 Muses A suffers the same fate they inflicted on a friend in “Shh”, and “Your Space” transforms into a desperate cling for a last shred of dignity by claiming they dumped the unfaithful sod rather than being tossed aside for a newer model. It’s powerful, honest, and I would love to see more lyrics like these.

Sadly, the solid vocals and excellent lyrics  of Muses Diary simply cannot compensate for the bad production. I’m not sure if it was rushed, or just an extremely bad idea but I do know what it’s not: memorable.