W, Episodes 1-2: Blurring Reality with the Fiction of a Webtoon

Lee Jong-suk returns to dramaland alongside Han Hyo-joo in a funny fantasy thriller about two people in parallel universes. Hyo-joo plays Oh Yeon-joo, a medical resident whose father is the creator of popular webtoon, W. This titular webtoon stars a young man, Kang Chul (Lee Jong-suk), on his quest to find his family’s killer. The core of the drama occurs when Yeon-joo is pulled into the webtoon, altering the story line and leading to consequences for both of them.

W is a product of writer Song Jae-jung who also wrote time-bending dramas Nine and Queen In-hyun’s Man. Jae-jung’s skill and unique plot shines in W as it expertly blends two realities. In this aspect, the script is helped by the directing and CGI using this blend as a transition from Hyo-joo’s reality to Kang Chul’s and back again. 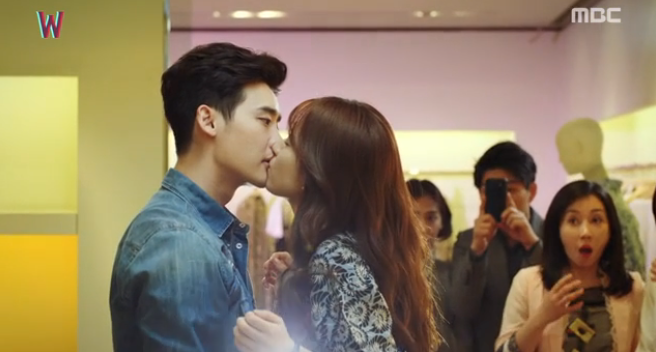 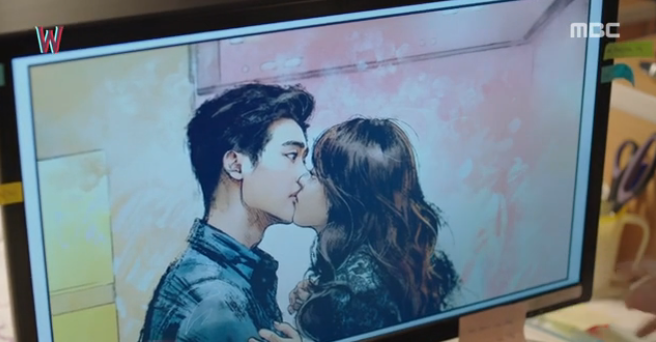 This mixing of art and reality is a beautiful combination and allows the show to play with the constrictions of a webtoon. Another example of this is when Yeon-joo, waiting to try and re-enter her reality, is fast-forwarded two months while sitting on a bench. She realizes that in webtoons, there is often time jumps to avoid dragging out a story. In this case, Kang Chul’s two month hospital stay is fast forwarded over to jump to his discharge. Two months may have passed for him, but for Yeon-joo, it was a matter of seconds.

Yeon-joo’s webtoon realizations are not limited to this instance. In a later scene, she realizes that in order to get back to her reality, she needs the webtoon chapter to end, and webtoon chapters like to end on cliffhangers. This meta commentary is enjoyable because not only is it true, but it also applies to dramas as well, giving W a cute sense of self-awareness.

But W is not all light-hearted; there are dark moments that raise more questions than they answer. Yeon-joo’s father, Oh Sung-moo (Kim Eui-sung) is hiding an ominous secret that he refuses to reveal to his daughter, even after she gets sucked into the webtoon, AKA Kang Chul’s reality. It’s obvious that Sung-moo knows that his webtoon universe is alive but he is determined to kill off Kang Chul for unknown reasons.

In Sung-moo’s eyes, much to the detriment of his daughter, Kang Chul is his creation and thus, he can do whatever he wants; to Sung-moo, killing Kang Chul is not equivalent to murder. But the end of episode two hints that there is so much more going on here. Kang Chul rewrites the destiny Sung-moo has drawn for him, much to Sung-moo’s astonishment and horror.

W has succeeded in creating a complex drama with parallel universes that cannot be untangled from each other. And while most of the first two episodes make it seem as if only Yeon-joo’s reality can affect Kang Chul’s, the ending of episode two suggests that the reverse is possible, leading to a plethora of possibilities. Compounded with strong acting from Han Hyo-joo and Lee Jong-suk, W is a drama to keep an eye on.

Did you like this reality-bending drama? Have theories about the webtoon coming to life? Let us know in the comments below!