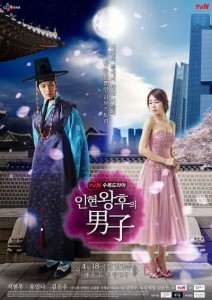 Traveling through time and space has been a concept much explored by the human race. The ability to warp and manipulate the very essence of time itself is an idea that has permeated the entertainment culture, manifesting itself in the plot lines of T.V. shows, novels, and movies. This year it seems like the K-drama writers have fallen in a deep never ending love with the time-travel fusion sageuk trend with both Rooftop Prince, Time Slip Dr. Jin, Queen In-hyun’s Man which is currently airing, and Faith set to air later this year.

In my free time, I’ve decided to follow Queen In-hyun’s Man, a drama that is surprisingly good but unfortunately not as popular as others, such as Rooftop Prince and The King 2 Heart.

As a warning, there will be spoilers ahead. This is a drama review after all.

The drama switches between two time periods, 1694 and 2012. The 1694 story line, set during the Joseon era, features our hero Boong-do as he tries to restore the exiled Queen In-hyun. This storyline is fraught with political intrigue as he fights the conniving plans of Minister Min, who supports the opposing Lady Jang. It is in this time period he is given the time-travelling talisman that transports him to the future. The talisman works only for him and only when the hero is in immediate danger of death. Returning to his time period is a bit easier and doesn’t require a threat of death.

The modern storyline features Choi Hee-jin, an actress playing the role of Queen In-hyun for a sageuk in her time. She becomes the only friend that Boong-do has in the new world. After a couple of hijinks, including a childish Hallyu star and a lot of misunderstandings, the two somehow fall in love. As Boong-do goes back to the Joseon era, his talisman gets torn and his memories of his time in the modern era fade away. 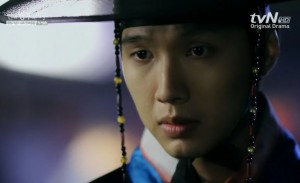 Now, this drama does a great job of juxtaposing the two storylines, flowing between the two time periods seamlessly. The Joseon sub-plot has enough conflict to have me on the edge of my seat while the modern sub plot is refreshing and cute to watch. The crux of the story is not about two star-crossed lovers whose love is thwarted by a psycho mother or a conniving love rival but rather time. Time becomes the main antagonist as the largest obstacle these two have to face. Thought Gil Ra-im from Secret Garden had it tough with a claustrophobic man child and a psychotic mother-in-law?  Well Hee-jin has 300 years cockblocking her love. The fact that the biggest obstacle the two characters have to face is an abstract idea, time, provides for a more satisfying ending when they do overcome it.

The relationship itself develops nicely; they aren’t the typical bickering romantic comedy couple who through their hate and sexual tensions somehow fall in love. It also helps that Yoo In-na and Ji Hyun-woo have good chemistry and they play off each other well.  The fact that Hee-jin is the only help and resource he has in the modern world helps develop their friendship and eventually they fall for each other. It is not a passionate clash but it’s quiet and still satisfying. 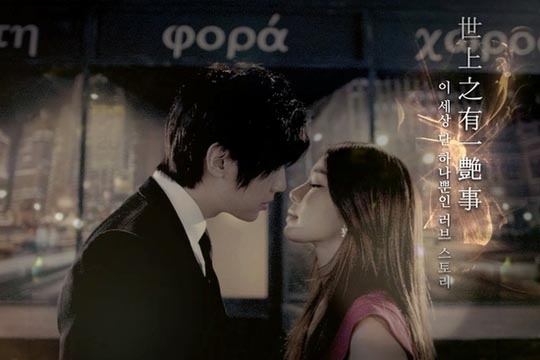 Along with the plot, the characters are written well. Hee-jin is a spunky, impulsive woman. She has her childish moments but anyone who has the gall to flip off a Hallyu Star gets a pass in my book. I liked Yoo In-na in Secret Garden and she is pulling off the role well, able to portray the spontaneity and the spacey nature of the character. Hee-jin is a good complement to the level headed and serious Boong-do. Speaking of the Joseon scholar, he has easily become one of my favorite male characters in the K-drama world. He is not a cold, detached, obnoxious, man child chaebol who has no understanding of basic human interaction. Instead he is an intelligent, level headed, noble, , scholar who also happens to be a badass. To be honest, I’m bracing myself for some noble idiocy because this man is just too awesome to exist in a K-drama rom-com. I mean granted, I have this thing for time travelling nerds with a sense of justice (if you got that reference I’m giving you a proverbial internet brownie) so my love maybe a bit biased.  He’s just so clever and help me K-drama gods, he’s just too damn adorable trying to figure out the 21st century. 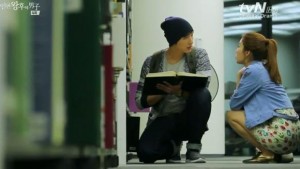 Even the minor characters, Soo-kyung–Hee-jin’s best friend and manager–and Han Dong-min are interesting. Soo-kyung is the uptight best friend is worried about her friend’s free spirit. It’s an absolute pleasure to see her freak out over Hee-jin’s like towards Boong-do. Han Dong-min, though a cocky Hallyu Star, is extremely comical and is not afflicted by the nice guy syndrome that usually distresses the second leads.  I actually don’t want him to end up with the heroine but I find his antics highly amusing.

The aspect of time travel is well explored in this drama. As a sci-fi nerd I’m curious to see the repercussions of using such a device. History has been tweaked as he uses the tools in the future to help him survive and that could have some unintended consequences. The drama also effectively uses time travel as a way for Boong-do to travel quicker. He understands that modern modes of transportation are more efficient and faster. He uses that to his advantage to move freely about and execute his plans. It further emphasized the clever nature of the character and it helped drive the plot.

This drama is very stylistic and shot very well, its slick and refreshing and I absolutely adore it. The characters are written and portrayed effectively and I have yet to have my head make contact with my desk in frustration. It’s paced well and I would recommend this drama to all our readers!

What are your thoughts? Leave your comments below!