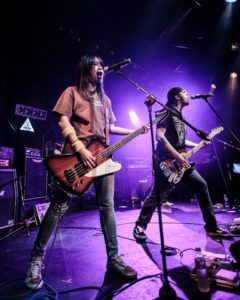 Seven years as a band and they have now released two full albums, among a number of EPs and singles. Recently, they did a split 7” with Seattle based Burn Burn Burn titled Blowing Minds & Melting Faces. We got an opportunity to ask Jeff Moses a few questions about how the band’s different cultures affect their sound and also about their upcoming projects.

How do you feel your different cultural backgrounds shape your music?

Jeff Moses: People always assume that since we grew up in different countries, we have these huge differences. The truth is, we all had very similar lives. We grew up in homes where there was always music of some kind playing. We grew up singing in church and school choirs. We all learned to play piano at a young age and then moved on to other instruments. We all got into different types of extreme underground music in the ‘90s. Music is biggest thing in all of our lives, so that subculture gives us everything in common.

What direction do you see your band going in the next couple of years?

Jeff Moses: We’re not a band with lofty goals. We love what we do and plan to keep doing it. After our US tour this summer, we’ll spend some time touring around Korea to support our new split seven-inch record, Blowing Minds & Melting Faces. After that, hopefully we’ll be ready to hop back in the studio and start thinking about the next tour. 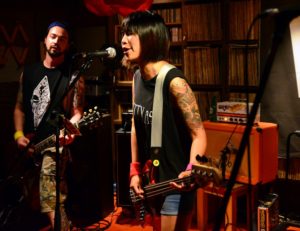 What bands inspire you?

Jeff Moses: There are a lot of bands that have influenced me as a songwriter. Most notably are Bad Religion, MxPx, Face To Face, The Descendents, and The Bouncing Souls.

How did the partnership with Burn Burn Burn happen and any other interesting projects down the pipeline?

Jeff Moses: We met Drew, Burn’s singer, when we played a house show he helped manage during our 2011 US tour. We had talked about doing a split together for a while, and it just made sense to do it once we decided to tour the US again. I’m not sure what our next project will be. I’d like to start working on our next full-length album, but it takes a while to write that much music. We may end up releasing a few EPs instead. I guess time will tell.

Trash and I also run a record label in Seoul called World Domination, Inc.  We’re releasing the new …Whatever That Means split seven inch in Korea. And earlier this month we put out a seven-inch record by a great Korean punk band named Full Garage along with a compilation album titled Them and Us 2 that features a bunch of cool Korean punk bands.  If anyone living outside of Korea would like to check out the new Them and Us 2 compilation, email at wdibooking@gmail.com and I’ll send out a free digital copy of it.  We’re hoping to spend more time working on World Domination, Inc. and would love to release music for other bands through our label in the future.

…Whatever That Means has such a wonderfully strong spirit to their music. They seem very open about sharing their music, if the interview didn’t tip you off, and generally express a love of their craft. “I Can’t Take It” is the first of their songs on their latest 7″, and it opens with this furiously energetic rush of punk. The video opens with an alarm ringing and shows a figurine losing it’s cool. …Whatever That Means has that driving pulse of guitars shredding through this picture of a monotonous life. Their vocals are let loose. They aren’t delicate and are practically shouting but it fits with this notion of disruption and being fed up with the norm. Despite exploding from the repetitiveness, their video ends with an alarm ringing again, a dark turn spelling a return to the monotony of routine. 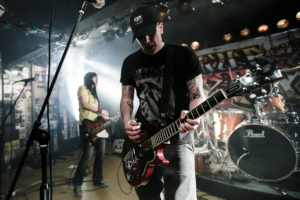 The band continues with this sentiment in the next song titled  “Just Another Day.” It continues this theme, reiterating the feeling of ennui. The melodic guitar rhythms, when they break from the refrain of “it’s just another day where we’re from” during the chorus, starts to create this sense that perhaps they don’t mind the repetitiveness of life. The dual vocals are a nice touch, and the song really has this summery vibe to it.

Rounding out the EP is “This Betrayal.” Of the set, it sticks out both thematically and with its sound. It has a harder edge and lyrically deviates from the rest. It gives listeners another look at the band. The tempo is fast and tells this story of a person who is absolutely torn up and enraged by someone that did him wrong. The dueling vocal comes into play but this time acts more as an inner echo, and the guitar breakdown at the end is pretty sweet as well.

Previously …Whatever That Means had gained more exposure in the Korean punk scene through their single “Sixty-Eight, Twenty-Two” featuring Won Jong-hee of Rux. Won Jong-hee’s raspy vocals add a different texture to the song, and the band’s energy continues to be strong. “Sixty-Eight, Twenty-Two” has a more classic punk type of feel with guitar riffs and slurred vocals giving it a slight edge, even if it errs with a pop-laden rhythm.

One last single I wanted to highlight is “Asian Prodigy,” a cover of The Chinkees’ song, lead by Trash Yang Moses. Her voice is so powerful, both smooth yet not afraid to push towards a throatier sound. What I love about this cover is that the song connects with them on a deeper level. The band has a keen understanding of the rigidity of their mainstream cultural norms and want to embrace this countercultural wave. They mention that:

The message of “Asian Prodigy” is one that rings true for so many Korean punks. In a country that promotes education, social status, and outward appearance over almost anything else, ignoring fashion trends, getting tattoos, and spending your time at punk rock shows sets you apart from mainstream culture. For many people, it causes a lot of tension in their families and makes it really hard to get a job. This video is a salute to all of you who choose to live life your own way no matter what the consequences 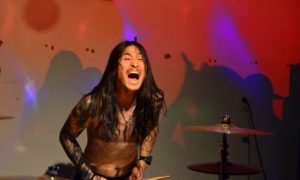 …Whatever That Means are kick-ass. They have this natural feel for their punk rock music, yet also can surprise you with the messages they embrace. They emulate these strong messages and feelings, often with simple lyrical messaging and back it up with some great instrumentation. …Whatever That Means is a band that has a pulse on their surroundings, and they embrace this current of sound that can’t be constrained by the mainstream.

The band is currently on tour on the West Coast of the United States, so check them out and catch them at one of their next stops. 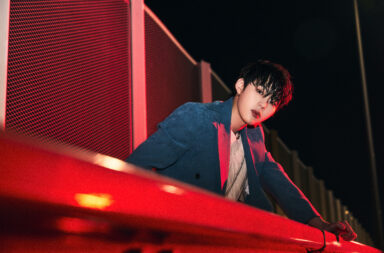