How to Formally Fulfill a Fantasy: Eric Nam's "Interview" 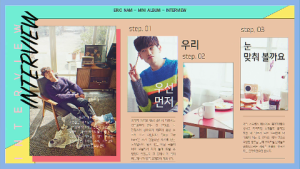 Perchance the most prolific and widely-recognized interviewer of foreign celebrities to South Korea and the K-entertainment scene, symphonic solo artist Eric Nam has made a comeback with the March 24th release of his second mini-album entitled Interview and featuring a remarkably aesthetic as well as playfully engaging MV for his sub-title track of the same name in addition to his dreamy title track “Good for You.”

Since his debut in 2013 with his first mini-album Cloud 9, Eric has paved a magnificently effortful path of musicality with his various covers, duet tracks (most recently an SM Station collaboration styled “Spring Love” with Red Velvet’s Wendy), melodic singles (my favourite being “I’m OK” back in 2015), and lively activities as a television host and interviewer. His re-entry into the K-pop scene as a solo artist has been enlivened due to the rhythmic efficacy, vanilla meaningfulness, and vibrant cinematography encased within “Interview” and appeals to the youthful and artistic sensibilities of K-pop fans while catering to the overarching sensationalism of the interviewer-interviewee romance outline.

“Interview” progresses from its introduction in the likeness of a piece of art taking form as the MV relies heavily on the artistic substructure of each scene; imaginably as an effervescent colour palette shades in each little entity fluidly and florally, as a slice of decorated paper is folded into a remarkable shape, and as photo frames are aligned in a labyrinthine manner to spell out a poignant phrase — which in this case is “Interview”. The melody that blossoms beneath the visionary cine is an audibly soft correlation between the jazziness of the percussion instrumentals and mild electronic dance beats, Eric’s serene vocals then make a silvery entry and deliver the first welcoming verses of “Interview.” The pretty young woman who is being interviewed appears to be nervous but is received warmly by Eric’s charming vocals and the interviewer’s meticulousness as she is asked if she is ready to start the interview. 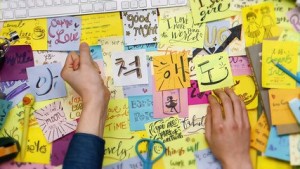 The scenes following the start of the interview are by far the most aesthetically pleasing sequences I have ever seen in any MV of the same flavour and concept; soft-hued sticky notes of all calligraphies and designs with adorable and random messages are slathered across a steely computer as if the interviewer is taking a particularly studious interest in his interviewee, and his interest in the lovely interviewee is further accentuated by the browsing he does on social media networks in hopes of finding out about her interests and passions. Through the simplistic lyrics the hook of the song is consistently reiterated through the starting of the interview and making sure the interviewee is comfortable, meanwhile the interviewer himself is honest about his own feelings; how hard he practiced to maintain his calm and charming exterior and how much he genuinely wants to get to know the beautiful interviewee before him.

If you don’t dislike me

If you want to know about me

Oh baby let me ask you

It appears that as the shy and awkward interviewer makes small talk with the interviewee in hopes of getting to know her better and whether or not she reciprocates his feelings, the colourful interludes that pop up and are sung romantically by Eric to express the interviewer’s inner elation over how fine she looks. The interviewee is treasured to the point that she is treated as a celebrity in a pseudo-film surrounding with two booms, LED lights, a clapperboard, upon a director’s chair and asked intimately about herself.

By the end of the emotively flushed and creatively crafted MV, it emerges that the several takes that had to be carried out proved successful in unearthing the pretty interviewee’s true feelings and helped her and the interviewer engage on a romantic level with a rosy looking future. Although there is no apparent bridge, the chorus in the musicality of “Interview” and how it is emboldened by Eric’s soft falsetto helps the song to remain ingrained within our minds and silkily upon our tongues; the song is fanciful, subliminally invigorating, and soft to the touch. 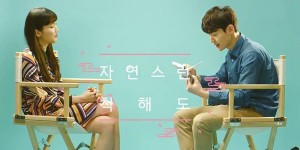 After co-composing and co-writing several tracks on Interview, Eric Nam was able to pour his personal experience with the art of interviewing and passion for music into a steady and sensorial album. The sub-title track “Interview” is one of my most favourite musical compositions he has released; the MV is unmatchable in it’s semi-saturated splendour and with its vernal colour palate, and the plot is a relatable scenario that many young people go through or in some way emulate in order to get to know the one they fancy. Meanwhile the song is a poignant and playful balance between percussion instrumentals and mature electronic beats that makes it enjoyably fast-paced without being confined to the limitations of a ballad. I would easily recommend this song to anyone!