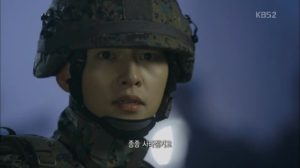 It has finally come down to this.

This epic pre-produced drama that has consistently shattered KBS ratings records has ultimately reached its finale this week and although the show-runners have promised to release a couple of special episodes of the show afterwards, at this point some of you might have been more than ready to throw in the towel when it comes to expecting a decent amount of good stuff from this drama.

So without further ado, here’s what went down during Descendants of the Sun’s final episodes. WARNING: spoilers ahead!

By now, everyone who’s into this drama should just switch on their cognitive dissonance hats because in order to even begin to vaguely appreciate — or at least, make it through — these final episodes, a total suspension of disbelief is required. When it comes to portraying remotely realistic and plausible occurrences that could hopefully create a deeper emotional connection with audiences, this drama is no place to go looking for that. But if you’re into random disjointed incidents that were just written to elicit momentary reactions from viewers, then you’ve found the appropriate concluding episodes to watch. 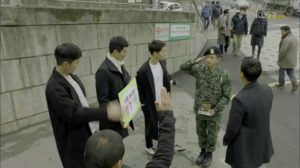 From the get-go, one could already feel that a set up is being made to usher in audiences for something major to go down. Our leading couple is getting all cozy and cute while resident military fluff-ball Kim Ki-bum (Kim Min-suk) is being cheered on by the dorky Team Alpha as he preps for his college entrance examinations.

On the other hand, Dae-young (Jin Goo) and Myeong-ju (Kim Ji-won) are still stuck in the limbo of their lovers’ quarrel. As once again expected of this drama, good things certainly don’t last for this people as both Dae-young and Shi-jin (Song Joong-ki) are tasked to go on a three-month deployment somewhere, thus having to leave their respective lovers behind.

It is at this moment that viewers probably knew what was going to happen next–either both the leading males die or they’re going to pull a Pearl Harbor and kill off one of the guys thereby sparing the other. However, since it is Descendants of the Sun — a drama that has been so far quite notorious for its ‘go big or go home’ drama bombs — the writers have, in a very anti-climactic way, decided to kill off the show’s golden boy Shi-jin and his partner-in-crime Dae-young. 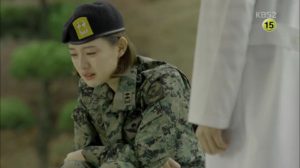 The events that transpired after were rather emotional, but definitely says a lot about the female leads of this series. Upon receiving the tragic news of their boyfriends’ deaths, both Mo-yeon (Song Hye-kyo) and Myeong-ju are obviously grief-stricken and unabashedly showcase their sadness (or in Myeong-ju’s part, some deep regrets considering how her last encounter with Dae-young was not all that pleasant.)

However, these two ladies continue to impress with their strong-willed attitudes by moving on and channeling their focus on their respective professions: Mo-yeon continues to get stuff done and even earns herself the title of Gangnam’s best ER doctor, while Myeong-ju returns to Urk.

Going back to Mo-yeon, watching her character grow and develop in the series wasn’t necessarily a spectacular experience which is actually befitting of her since Mo-yeon — unlike Shi-jin — isn’t really much for grand and open gestures. She keeps it splendidly low-key and while her character might even come off as a bit stiff and awkwardly distant at certain times, it only reminds us of who Mo-yeon is, especially when her break-through moments of compassion really showcases how much she actually cares about people especially when it parallels with her profession.  Hence, her decision to go overseas for some volunteer medical work felt like the appropriate penultimate shift to her character. 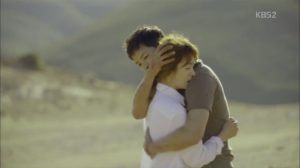 Sadly, the drama semi-screws everyone over with a highly expected plot twist to top all plot twists: dead people coming back to life. And to make it even more outstanding, it was all timed quite perfectly: Mo-yeon was just about to commemorate the one-year anniversary of Shi-jin’s death when all of a sudden, Shi-jin emerges from the desert horizon. On the other hand, while Myeong-ju experiences some pretty metaphorical/miraculous snow in Urk, Dae-young also makes a stunning re-entrance and the two are reunited.

While this may all sound as dramatic as it looks, the mood reverts back to its usual rom-com sense by somehow making light of how Shi-jin and Dae-young were literally gone (and held under captivity) for more than a hundred days. Plot holes aside, it was actually a nice touch that North Korean commander Ahn was given a comeback in the storyline of this week’s episode, since in a way, it gave off the impression that this drama really does make some relative effort of going back every now and then to some of the plot points it has brought up in the past.

More reunions and of course a series of inevitable product placements later, the series pretty much wrapped up with a rather lackluster, yet adequately heartwarming, conclusion to this sixteen-episode drama. In all honesty, with each episode spanning almost an hour long, it could have ended at just 12 episodes, but that would have just taken time away from the characters further showcasing their Subway sandwiches, Dal Komm coffees, and Hyundai cars (this article was in no way sponsored by the aforementioned products, by the way.) In the end it felt like episodes 13 up until 16 — especially 16 — were just gratuitous episodes that aimed to give viewers more romantic fanservice (and a brief K-pop fanservice moment made possible by SME’s constant intrusion everywhere.) 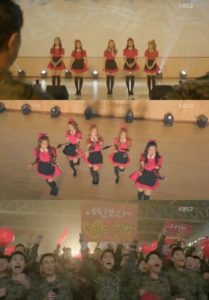 For a drama that has received so much hype and popularity throughout the course of its run, it’s quite sad to realize that narrative-wise, it was never really particularly outstanding. Apart from the certain compelling moments in Urk in which Eun-sook was really able to highlight the parallels between the life of a soldier and the life of a doctor, everything else sort of fell flat.

From focusing way too much on the romance aspect of the series to lazy writing and rather two-dimensional characters, Descendants of the Sun ultimately ended up using war and the medical profession like simple accessories or backdrops to the characters’ love affairs. If that wasn’t enough, the entire drama just had to be transported back to Seoul in which the soldiers’ military uniforms and the doctors’ scrubs and gowns were reduced to meaningless costumes.

To conclude, this drama definitely could have been a lot better. Heck, had the writers actually taken the effort to just flesh out the characters even more in this series, then that would have really saved it from its disjointed, episodic plots and annoying product placements. Alas, it was either way too overwhelmed by the amount of potential and material that it could have worked with or somehow Kim Eun-sook has developed and mastered an auteur style of writing her dramas that we just can’t complain about her dramas anymore. One thing’s for sure, one can’t deny the many risks that this drama took and for that, it’s enough to give it an appropriate salute of admiration.