Descendants of the Sun, Ep. 7-8: The Brighter Side of Things 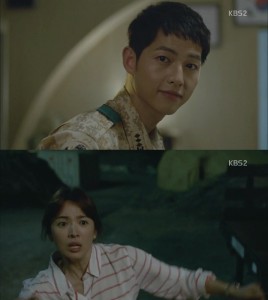 This week’s episodes of Descendants of the Sun centered heavily on the drama surrounding your typical post-disaster scenario. From showcasing gruesome albeit KBS-approved injuries to appropriate moments of tension, it definitely felt like these episodes were made to hype up the audience for the more intense episodes in the weeks to come.

After a massive earthquake strikes Urk, Captain Yoo Shi-jin (Song Joong-ki) and with the rest of the Taebaek Corps are deployed to assist in the rescue operations at the Mowuru Power Plant, which has collapsed and trapped dozens of workers inside the unfinished building. Meanwhile, Doctor Kang Mo-yeon (Song Hye-kyo) and the rest of the Haesung medical team  are also caught up in the aftermath of the disaster as they tended to the injured workers and civilians.

Although the main setting of episodes seven and eight focused on the rescue operations at the power plant, the sneaky character of Mowuru Power Plant manager Jin Young-soo (Jo Jae-yoon) grounds us to what may be the focal conflict of the story. As we all know from last week’s episodes, Manager Jin seems to be taking part in some sort of seriously illegal business with Captain Argus (David Lee McInnis),Shi-jin’s former military comrade turned gang leader. 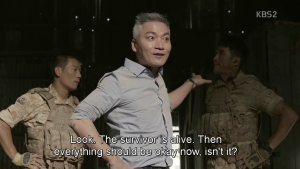 Manager Jin has definitely proven to be one of the most annoying and ungrateful side-character antagonists in K-drama history. Then again, it’s hard not to blame him after Argus has threatened his life should he fail to carry out his end of the deal. Unfortunately, Manager Jin’s sticky situation has led to some desperation on his part; which in turn very nearly cost the life of one of the workers — and his rescuers Shi-jin and Dae-young — trapped inside the building.

While Manager Jin’s frustrating moments on screen sufficiently contributed to the drama of the rescue operations, the series’ leads and their characters’ respective roles in the operations were the definite kickers to this week’s episodes. After managing to enter the building, Shi-jin and Mo-yeon find out that only one of the two survivors — one being Manager Go, the jolly and kind-hearted head contractor of the projector — can be saved. This particular moment in the series continues to disprove Mo-yeon’s self-proclaimed selfishness as she tries to reason with Shi-jin that both of the workers are still worth saving.

As expected, Shi-jin responds with the grace and urgency of a trained soldier who is constantly faced with these sort of difficult situations. He reiterates that only one can be saved and in the end, Mo-yeon chooses to save the younger worker over Manager Go. The entire dilemma might have appeared cheesy; but the decision, especially with Manager Go’s reasoning that the younger worker still has a long life ahead of him, says a lot about the general theme of episodes seven and eight, which is the theme of hope. 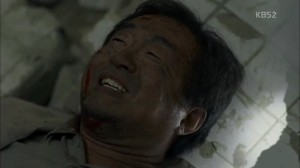 We see this particular theme play out as Doctor Chi-hoon (Shinee’s Onew) tends to an injured civilian who refuses to be anesthetized because she is pregnant. As a future father, it is no surprise why Chi-hoon would deeply sympathize with the woman. However, as a part of the general narrative, this seemingly insignificant and almost random, left-field moment contributes to the message of hope in the series — or, at least during this particular arc in the drama.

Interestingly, throughout the entire ordeal it felt like the character who managed to exemplify this theme the most is the drama’s resident cynic, Mo-yeon. At the very start of the series, it has been made clear that she is someone who is deeply passionate about her profession. However, due to the corruption schemes at the Haesung Hospital, Mo-yeon eventually became disillusioned and set up this amusing facade of someone who couldn’t care less.

As the series progresses, Mo-yeon’s passion continues to slip through the cracks; and it was definitely emphasized during this rescue operations arc. From her desire to save both the survivors in the building to her decision to conduct an impromptu operation at the construction site, her optimism manages to pervade every situation. 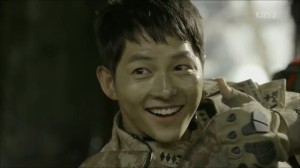 Of course, in the midst of all the drama and the tension of episodes seven and eight, the story was still able to sneak in some rather cheesy, rom-com moments (it is still a K-drama, after all). Nevertheless, it is commendable how the romance and comedy were appropriately placed in the episodes, which definitely allows the audience to focus their attention on the goings-on of the rescue operations.

Unfortunately, while episodes seven and eight definitely amped up on the production and the intensity of the series, it sort of fails to keep viewers invested enough by becoming too episodic, and by avoiding properly fleshing out the series’ main conflict. While this might have been excusable to a certain extent during the earlier parts of the series, it doesn’t seem justifiable now that the drama has hit its halfway point. It almost seems as if that if it weren’t for the romance (and Joong-ki’s stellar performance as Shi-jin), it might not even be interesting enough to be worth the hype that surrounds it.

In the end, one can only try to emulate Mo-yeon’s ever-growing optimism by looking at the brighter side of this series: interesting characters, amazing production value, and a potentially amazing plot that would hopefully live up to its name in the episodes to come.