The Sunday Social, 1/10: Epik High is Going to Coachella! 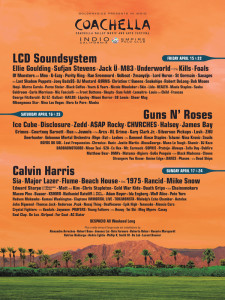 This week saw Coachella release its line-up for this year’s edition, and there was a pleasant surprise for K-pop fans: Epik High! The hip hop trio will be travelling to Indio, California, to perform at the music festival. And apparently, this news didn’t catch just fans off guard, but some YG staff as well! According to Tablo, the line-up was revealed before everyone at the company was able to be informed.

The first Coachella Valley Music and Arts Festival was held in 1999, and has since grown to a massive event held over two consecutive weekends in April. Epik High will be the first mainstream Korean act to perform at the festival, taking to the stage on Sundays the 17th and 24th.

But, as some fans have noted, it will not be the first Korean act overall. Duo and married couple EE, who performed at SXSW last year, brought its unique brand of energy to Coachella in 2011:

I’ve never been big on Coachella (if I want to see girls in bindis I’ll just go to dance class), but I have to admit I’m curious about what Epik High will bring to the festival. Those who caught the trio on its North American concerts last year may have a better idea than I; but it will still be interesting to see how Epik High finetunes its set for the Coachella crowd.

Will you be going to Coachella this year? Have you been before? What do you think of Epik High’s impending Coachella debut? Let us know in the comments below!