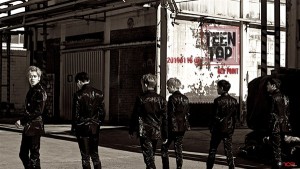 It has been about half a year since Teen Top‘s last promotions with their sixth EP, Natural Born Teen Top, and its accompanying title track “Ah Ah.” Teen Top’s latest MV “Warning Sign” off their Red Point mini album sees the group singing about being embroiled in a dubious relationship.

Teen Top have been around for five and a half years now, and it is great to see how they have matured as a group. None of them are teenagers anymore! But really, they have come to be known for their great dances and footwork, and their title songs have shown upticks in quality since debut. While “Warning Sign” doesn’t necessarily tread new ground for the group, the accompanying MV is beautifully shot.

“Warning Sign” is composed by Shin Hyuk, Mrey, Davey Nate, and DK and written by Mafly, C.A.P and L.Joe. The song starts off with a moving bassline that slowly builds into a great verse that is marked by some nice layered vocals from Chunji. A few sprinkled piano chords gives a whimsicalness to the production and adds an intriguing dimension to the song. However, when the chorus kicks in, it all falls a bit flat, plodding along with an echo keyboard effect but lacking a strong hook. When the change up starting with Ricky‘s lines before the rap happens, I actually enjoyed it because it created more depth within the song, with the song’s melodic progression taking more liberties and giving us a wider range. I also like that there seemed to be a more equitable division of singing with Changjo, Ricky, Niel, and Chunji trading lines during the verses. L.Joe’s rap was sharp. C.A.P got the short end of the stick with lines, but hopefully he will get more chances to flex his skill next time around.

The lyrics to the song talk about a girl who they view as cruel because they suspect she is cheating on them with another guy. She continues to coyly act like nothing has happened and tries to fool them. But Teen Top don’t neglect to see what’s right in front of them. They realize they have been played by this girl, but there are mixed emotions because they still feel drawn to their chemistry, despite the betrayal and deception. The way they figured out this girl’s wayward ways were from some physical cues:

“Your tangled up hair, your unbuttoned shirt

You got caught in your acting, your hands shake”

Juxtaposed with a later line discussing how “your trembling eyes are shaking up my heart,” it develops a layered and complicated story that relies heavily on the physical language they notice during their interactions.

Teen Top are one of those groups whose lyrics — to put it in a gentle way — deal with a wide scope in the realm of relationships. Exploring Teen Top’s title track lyrics would be fascinating. I feel like they’ve been all over the map in relationships: from obsession, to devotion, and also being on the other side of deception. “Warning Sign” completes that binary, from being the naive and deceitful youngsters in “No Perfume On You” to now being on the receiving end of deception here.

The MV itself is a nicely shot affair. It starts off using the trendy black and white palette with pockets of color. As the video progresses, more accents of color help with adding to the drama of the song. The video also features a bunch of cuts with the boys interacting with a female, who walks by them or stands in close physical proximity. 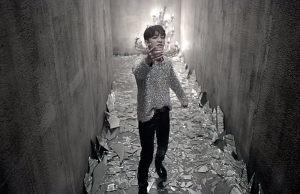 Otherwise, each member’s solo moments were thematic warning signs, with the moments where the lipstick spelled out ‘warning’ being the most obvious nod. But there were also a few other striking scenes. The shot of the white furniture propped on the wall with black paint dripping down on it was ominously poetic. Also, the scenes with broken shards of glass littered all over a concrete hallway with the sparkling L.Joe walking around and picking up a shard made me all sorts of uneasy — mostly in fear that he was going to get a cut from the broken shards. While some scenes like the dice didn’t make much sense to me, the MV with the pleasing color palette sure does pack a punch. At the end of the MV, the story also has a twist and hits reverse. I suspect it is suggesting that this reversal is the true reality of the story, and everything we saw preceding this reversal was just a reordering of the timeline of events.

The dance sequences were probably my favorite aspect of this video. Teen Top have a coolness to their movement, and the “Warning Sign” dance does not disappoint. From the number of group dance shots we get, I enjoyed the level changes, explosion of movement, and how Teen Top hit those beats so smoothly.

This latest release from Teen Top isn’t show stopping, but it delivers in a different way. It continues to give us things that we enjoy from the group, such as the dancing and cleanly shot video. “Warning Sign” doesn’t have that hook that will ring in your ears, but it does feature some intriguing production during the verses. Teen Top may not have the catchy K-pop breakout hit in “Warning Sign,” but the potential is brimming, and they still manage to deliver on a visual and performance level.