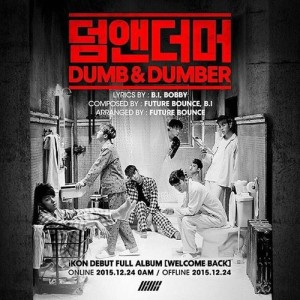 Along with “What’s Wrong?,” “Dumb & Dumber” is the final release from YG‘s newest group, iKon, and wraps up their debut promotions. Their start is one that has been covered before, but for those that want a quick overview, here it is: YG splits trainees into two teams called Team A and Team B, both compete to debut in WIN, WINNER (Team A) wins and debuts, YG creates a new show called Mix & Match, which saw Chanwoo added to the newly created iKon. They started their official debut promotions with “My Type” and followed it with “Rhythm Ta,” “Airplane,” “Apology,” “Anthem,” “What’s Wrong?” and, finally, “Dumb & Dumber.”

While I admit to being a rabid Team A stan, I have rooted for iKon, going as far as watching Mix & Match. One thing that has always stuck out to me with the flurry of MV’s released earlier was that YG seemed to be making them into Big Bang Lite. There’s nothing wrong with that, and considering the success of Big Bang, it’s understandable. Not only does it differentiate iKon from WINNER’s high class aesthetic, but it also sticks to the hip-hop sound that the boys have not only excelled in, but are most comfortable with.

While the intent is understandable, the execution has been at odds with the youthful energy that iKon possesses. With “Rhythm Ta,” it seemed as if their image was a mask, with “Apology,” it hit the emotions but left me wondering if they even knew and experienced what the song talks about. There was something off, and it was that it felt like iKon was simply cosplaying and acting, instead of letting it come to them naturally.

While “Airplane” is probably my most played, non-Mix & Match, Team B/iKon track, the rest of their releases have left me feeling cold. There was a serious case of de ja vu, having seen similar MV’s from their labelmates, and having heard better executed versions of their songs.

Left wanting for more, I have.

This all changes with “Dumb & Dumber,” which is, long story short, the iKon I’ve been waiting for.

The music video starts off with leader B.I asleep, snoring away. The scene then changes to B.I and Bobby in the front seat of a car, with the others in the back rows. They insert a cassette tape…and chaos starts.

It then slowly descends into their dreams, or at least scenes that look to be dreams. The way to differentiate between scenes that depict reality and their ‘dreams’ is that they have styled hair in the latter. 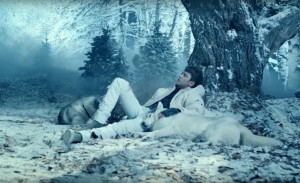 These scenes include different scenarios. Jinhwan has an isolated building for himself, Yunhyeong has a city with exaggerated hands (where the rest later come to perform the brief snippets of the dance), Chanwoo has his snowy landscape and wolves, Donghyuk has a very creepy, closed room filled with framed pictures of eyes, and Junhwe goes from the Blue Eyes White Dragon in “Airplane” to a blue eyed vampire in “Dumb & Dumber.” As for B.I and Bobby, they are mostly paired together – specifically they are, amongst other small scenes, astronauts.

“Ladi dadi, a fun game. What’s good is good.” This line explains the whole philosophy of the music video – the iKon members having fun. “Dumb & Dumber” is the most simple of their music videos, but it is also the one I watch over and over. It is fun, it is lighthearted, and it is iKon just being iKon. No pretenses, no overacting, no angst.

This is what makes the music video so watchable. There’s a dose of crazy and fun, but it all retains a youthful edge and feel. That is what iKon should be known for. They are teenage boys and young adults who, most likely, have not experienced the grand heartbreak they tried to show in “Apology” and “Airplane.” Having spent years enclosed in training, they most probably spent their years goofing off when they could. 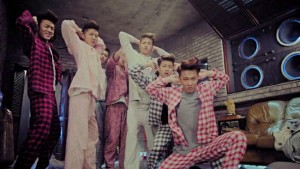 “Dumb & Dumber” is believable, despite it having the most dream-like sequences, because it is the release where you see the most of the iKon we came to love and appreciate in Win and Mix & Match. The exuberant atmosphere of MV suits their personalities like no other, and that is why this has become my favorite release from them.

Also, shout out to Junhwe for smizing his way through the whole thing.

As for the song, it’s exactly what I’ve been waiting and wanting for iKon. It’s similar to “Sinosijak” without being a copy.

If you’re looking for a song to start a concert or set list with, this is definitely the song just for that. From start to end, it is euphoric and energetic, it shows off what their vocalists are capable of, it has an ear worm of a hook, and “Dumb & Dumber” is, for lack of better term, an anthem.

Sit back and imagine iKon performing this in their own concert, with those crazy baseball bat lightsticks being waved furiously and their fans chanting along. Out of all their title tracks, this is easily the song that suits their image best. It is exactly the balance that identifies and justifies the assumption that, musically and concept-wise, iKon is the best candidate to fill in YG’s future Big Bang shaped hole.

“Dumb & Dumber” is the type of song you start a career with, and makes me wish that this was what had followed “My Type” instead of “Rhythm Ta” – which, in turn, I wish never saw the light of day. There is still plenty of room for improvement, but this track shows the promise that iKon had in WIN and Mix & Match. It makes me want more, and I will wait so very patiently for whenever YG decides it’s their turn to promote again.

And who knows when that will be.