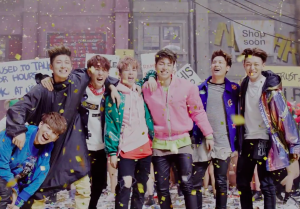 After a lukewarm debut, iKon has returned with another series of MVs as a Christmas present for fans. “What’s Wrong?” leads the charge as one of these two singles, meaning that a lot rides on it to further solidify the rookie group’s place in the industry. In “What’s Wrong?”, the group plays with yet another sound, as well as a video that is miles away from their poignant “Airplane” or flashy “Rhythm Ta.”

The song opens with the lyric “If you ever loved somebody, say yeah,” quickly establishing “What’s Wrong?” as the perfect warm-up song for a crowd to sing at the top of their lungs at a gig. Unfortunately, this opening is also immediately reminiscent of iKon’s big brothers, Big Bang, and their singalong anthems, particularly G-Dragon’s “Crooked.” Even though some may be sick of hearing this comparison again and again, iKon has thus far failed to counteract their critics in this regard, meaning it is still a valid criticism to bring up.

The MV depicts something that is quite possibly close to iKon’s reality: being chased and eventually captured by deranged fangirls. Everything takes place in a pleasantly pastel city set, letting the members really stand out against the backdrop. iKon’s interaction with the masked girls in the MV is meant to represent the conflicts that couples often endure, with the members being tied up, cornered and otherwise assaulted by their captors. The boys maintain an infectious energy throughout the MV, ensuring that fans will at least get a laugh out of the MV. 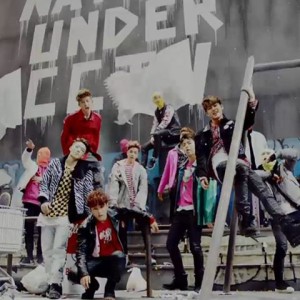 The MV gets increasingly wacky as it progresses, eventually descending into something that bears a lot of similarities with some of Big Bang’s recent material. The iKon members are slapped by oversized hands, have a food fight, and wear ridiculous clothes that could easily have been borrowed from the sets of “Bae Bae” or “Bang Bang Bang.” Elements of the set are also familiar, with graffiti and flags being familiar YG back drops. Although a consistent aesthetic throughout the company is understandable, iKon deserves more than being a recycled boy band.

While the MV is playful and fun, the lyrics tell a very different story, that of an abusive relationship. The girlfriend in questions prevents her boyfriend from going out to see his friends — effectively keeping him on a leash like a dog. We see that he is making an effort to resolve the issue, but his girlfriend is unwilling to discuss their relationship: “Like a habit, you say, nothing. What do you mean, nothing?”

A serious topic expressed through poignant lyrics sits uncomfortably with such a lighthearted MV. All this seems to trivialize the male protagonist’s suffering, or even glamorize the fact that he’s smothered by attention from women. At the same time, the MV can be seen as a cathartic release for the male protagonist, as the members fight back against their captors through an epic game of dodge ball, and seem to eventually make peace with them. 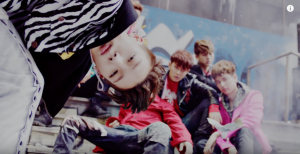 A noticeable improvement in “What’s Wrong?” is the more equal line distribution between members. No member is forced to sing a half-hearted “la la la” in the background, and each member gets a decent amount of time on screen with a distinct scene to themselves.

It’s clear that there’s been an effort made to develop iKon’s look and sound since their first series of releases, but unfortunately, there’s still much to be desired. “What’s Wrong” feels like yet another experiment which dumbs the members down into an easily consumable boy band. Here’s hoping 2016 sees iKon push themselves to their potential!