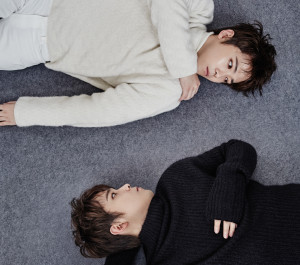 Fans of F.T Island were definitely given something to be thankful for late in 2015. The pop/rock band’s enigmatic and multitalented lead singer, Lee Hong-ki, recently released his debut mini-album, FM302.

The trend in 2015 seems to be heavy experimentation with House, and its less melodic relative, Techno. FM302 goes the route of a more belligerent, club-ready composition with opening track “Let’s Seize the Day.” The track opens the album on a somewhat positive note. While the title suggests Hong-ki’s desire to grasp at every opportunity to better his life, the lyrics express the sentiments of a man in pain who’s searching for release from his burden:

While I’ve always been on the fence regarding the genre, there’s no denying the catchiness of the beats and the infectiousness of the rhythms. A testament to just how much control Hong-ki has over his instrument, the music—which by its very nature is meant to be over-the-top—doesn’t at all swallow his voice. It’s your standard thumpa-thumpa, but it’s catchy enough to keep listeners invested.

Hong-ki follows up the crunch and pop of “Let’s Seize the Day” with an absolutely gorgeous ballad. Though lyrically it follows the same maudlin tropes of being lost in the throes of inextinguishable pain after a bad breakup, “Insensible” has a simple melody that allows room for Hong-ki’s voice to explode and expand. As ballads are meant to do, it highlights the vocals. There are few places to hide in a ballad, unless, of course, the composers were intent on the music overpowering the vocal. However, this is a perfect balance of sweeping composition and powerful vocals, the likes of which even erase the bad taste left in my mouth after the tracks that follow.

“Kings for a Day” was a bit disappointing both lyrically and musically. While I’ll never begrudge a song’s positive message, this song was just way too generic and uninteresting, disrupting the flow of an otherwise intriguing debut effort. “Be Your Doll” goes the route of typical K-pop, adding another musical dimension, but nothing much in terms of anything as interesting as what came before or what, thankfully, comes after it. Both songs do the job of adding upbeat pop in the middle of a more mellow album, which makes sense. No one really wants a dreary mini-album to represent their debut as a solo artist. However, it is rather unfortunate how generic sounding the pieces are in comparison to the more musically interesting Techno and inherently emotional balladry.

”LOL (Loudness of Love)” managed to bring FM302 back from the depths of mediocrity. It’s a flawless synth-driven electronic composition that meshes beautifully with Hong-ki’s guttural timbre. “LOL” follows our protagonist, who is going through a bout of loneliness where the only cure is to be closest to the one he loves, holding tight to a moment in time that will alleviate all his self-doubt and feelings of isolation:

I just wanna have tonight
Don’t worry just
Enjoy the ride, the ride
Oh, I feel alive with you
You make me high, so high
Stay right here with me closer
Touch me now
Let me show you how

The album ends with “In the Rain.” As with “Insensible,” we get a flourishing composition – complete with winds, drums, and heavy bode instruments – that perfectly captures the smokiness of Hong-ki’s high tenor. Though it does err more on the side of the OST ballad, as it seems most ballads do as a means to appeal to a wider audience, that doesn’t detract from its power and purpose. It is a bit unfortunate to close an album on such a generic ballad, but it does solidify the boldness of Hong-ki’s voice.

Lee Hong-ki is an exceptional vocalist. No one in their right mind could ever deny that. Be that as it may, as with many debuts, especially from artists venturing away from the comfort of a group, FM302 suffers from a lack of cohesion and focus. Though this variety seems to be the purpose of an album whose title suggests a radio station, it does leave one with the same dizzying sensation left by a station that plays any and everything as an attempt to reach the widest audience. Experimentation with electronic and Techno sandwiched with more typical K-pop/rock fare and heavy ballads with varied results and inconsistent quality. However, what it’s missing in direction, it more than makes up for in some of its composition and the enormity of Hong-ki’s talent. If nothing else, the F.T Island singer’s debut mini highlights just how powerful an instrument he has.