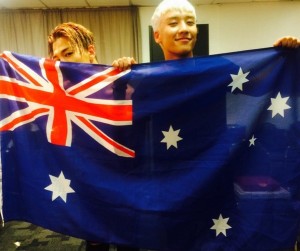 The 21st of October, 2015 will forever be a special day in my heart. It was the day of Big Bang‘s first ever concert in Melbourne, Australia; and it was also my first ever K-pop concert.

Melbourne has been luck enough to have hosted other K-pop groups like B.A.P, B1A4 and BTS; but the former two were in town during my exam period, and I really didn’t care enough about the latter to attend (my apologies to Seoulbeats’ BTS fans).

I’m not even much of a Big Bang fan, either, but I knew I had to go to their concert. Of all the pieces of advice our former Editor-in-Chief Amy bestowed upon me during our time together at SB, the two I remember best were:

And so, I bought my ticket, spammed my husband with T.O.P gifs, met up with another SB alumna, Morgan, and walked straight into the famous Rod Laver Arena. No, really: they were forming a new queue just as we walked up to the doors, meaning I was inside within five minutes of arriving.

The downside to my late arrival was that all the cool merchandise like light sticks had long before sold out; but I make my own souvenirs, so this didn’t faze me… Until I got inside and realised that a mobile phone is no substitute for the glowing yellow penta-crown.

Despite that, I still had an amazing time! There was no opening act, but the music videos playing on the big screen were more than enough to get everyone hyped. But the screaming then was nothing compared to when Big Bang finally made their appearance. Whether it was because they were consummate performers, had performed this tour several times already, or a combination of the two, the members performed like a well-oiled machine while still gallavanting around and lapping up the crowd’s attention.

We didn’t get anything crazy like the guy who invaded the stage at one of the Sydney concerts, but Seungri still brought the weird by professing his love for Google, which apparently told him that “Melbourne people party hard!” Then he danced to “Single Ladies” and told apparent strangers that he loved them, too. All the members made the effort to speak English for the whole night, and it was much appreciated — not to mention adorable — but Seungri took it to a whole other level, seriously.

Almost everyone screamed and danced the night away to Big Bang’s music. The girl on my right probably became the most poised and least embarassing member of the audience  that night, as she stood still and remained quiet the whole time. But I was in good company on my left, sitting next to a mother and daughter who had already seen Big Bang live in Seoul and in hologram form (which was better than it sounded, apparently).

Despite the repeated references to Big Bang’s high calibre as performers, I attended mainly to see T.O.P in the flesh and watch him perform “Doom Dada” live. I can now die a happy woman. Still, I ended up enjoying just about every song performed; I may have disparaged “Bang Bang Bang,” but you know I was into that shit both times it was performed.

All in all, it was an unforgettable experience. Now that I have shared my experience, it’s your turn to tell me about your first K-pop concert experience. And if you haven’t had one yet, which group would you do it for?