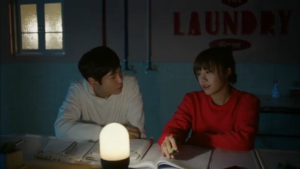 Sassy, Go Go spends most of episodes 5-8 focusing on the growing bonds of the cheerleading team; not just in the broad sense of “not being complete assholes to each other” but taking the time to show genuine friendships and flirtations developing across the once-impenetrable lines of White Tiger and Real King.

After having to be snuck back into school by Instructor Nam and Teacher Yang, the sides have become blurred, with members of both groups spending time together voluntarily. They eat together, hang out together, and are, in short, genuinely friendly. Not even the level of hell known as midterms is able to break apart the fledgling friendships. 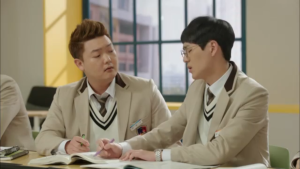 Where one might expect a renewed division between the top 5% of students and the school slackers, none appears. When Soo-ah’s minions learn of Real King student Da-mi’s rank of 158, they start teasing her about having a rank they didn’t know existed , but she’s laughing with them, at  a group study session, using their notes. The two maknaes in particular are reaching out, with Da-mi and Tae-ryung having crammed as much flirting as their sunbaes into literally two minutes of interaction across the show.

Of course, while well-developed minor characters are great, but we’re here for the leads. Episodes 7 and 8 focus on Yeol being accused of stealing a copy of the midterm– it was, shockingly, a frame job by Soo-ah–  and the ensuing fallout. Tensions are already running high due to stress, and the revelation that the number one student might have been cheating is much more believable as Yeol’s failure to take midterms means a rank increase for everyone else. Many in White Tiger are doubtful, but the idea that they could go up is too tempting to resist.  Thus, only Yeon-doo and Ha-joon defend Yeol during his suspension.

And when he is proven innocent and returns to school, Yeol seems poised to continue on his path of being a self-promoting outsider, with his father filing a lawsuit and Yeol coming up with a list of demands against the teacher. Alas, no. Yeol realizes that while many in White Tiger questioned his cheating, no one really believed he did so. Exam Brain makes people do crazy things; some people juggle geese. Instead, he persuades the teacher in question to extend the free pass he gets on minor infractions to his friends — all of them, White Tiger and Real King alike. He also uses the lawsuit to get Teacher Yang off the thin ice he’s on in terms of employment. But why is Teacher Yang on thin ice? For that, go back one episode . . . 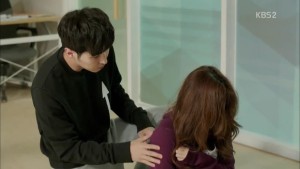 Sassy, Go Go‘s sixth episode is one of the best episodes of television I have seen in a long time. It’s a poignant story of an 18-year old girl who gets caught up in forces beyond her control and is desperate to make it right, despite all the adults telling her it already is. And it’s not the story of our plucky heroine Yeon-doo or even our misunderstood villainess Soo-ah, but her minion.

Jae-young and Na-yeon are Soo-ah’s requisite lackeys. Rule One of Teen Drama: The Queen Bee must have minions. They’re there to be mean and back their leader, usually without distinct personality or even names. But Episode 6 is all about Jae-young, giving her more character in one episode than some leads get over a whole drama.

Teacher Yang’s habit of informing the Ministry of Education about Sevit’s shady activities has been found out by Principal Choi, who immediately begins looking for any reason to fire him. At that time, Teacher Yang gets recruited to spot Jae-young, who’s having some trouble with a lift. Sure enough, down she goes into Teacher Yang. Only instead of getting up, she panics that Teacher Yang touched her breasts on the way down.

Principal Choi and several parents immediately clamor to have Teacher Yang fired, but when Instructor Nam points out that awkward physical contact is the trade-off made for safer catches, the situation calms slightly. Jae-young herself is tormented by her actions. As she tells Na-yeon, in the moment, she felt so violated; but in hindsight, she realizes it might have been unavoidable. But when Soo-ah adds in the chance for revenge against the whistle-blower to parental and school pressure, poor Jae-young caves and tells the adults what they want to hear. Teacher Yang is fired. 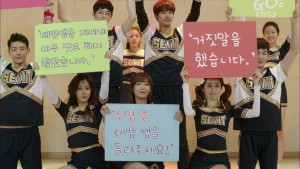 The whole situation is a tragic misunderstanding blown out of proportion. Physical contact is something cheerleaders, dancers, martial artists, et cetera, need to get used to, but you have to get used to it. The first times it happens its awkward and uncomfortable, and no one should blame Jae-young for freaking out in the moment. When she tries to take her panic back, every adult figure tells her not too, because they know about the whistle-blowing as well. Teacher Yang clearly understands Jae-young’s pressure, and tries to reassure her that he doesn’t hold her actions against her.

The guilt over his firing tears Jae-young apart, yet when she tells her mom that she wants to recant what she said and get Teacher Yang her job back, her own mother tells her not to do so: think of the embarrassment. She’s left stewing, feeling that she did wrong when everyone tells her she did right, and having no way to fix it. By her side through everything is Na-yeon, making the dynamics clear. Jae-young and Na-yeon are best friends , who back Soo-ah to stay off her bad side more than to get on her good one. And with encouragement from Yeon-doo, the twosome convince everyone to replace their cheer placards for an exhibition with new ones: We Lied.

The bravery Jae-young shows there cannot be understated. Her mother wants her to lie, her school wants her to lie, even the guy whose life she tanked doesn’t blame her for lying, and it wasn’t even that much of a lie. She may have overreacted, but there’s no doubt that the violation she felt was perfectly valid. And when she does tell the truth, it’s not to a principal or a board, it’s to everyone, opening herself to judgment from all. But she does it anyway, because Jae-young feels that righting a wrong is more important than her own standing. 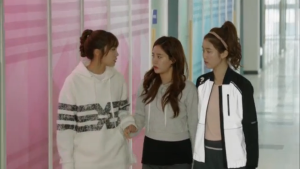 When the three ringleaders have to face the music, Na-yeon and Jae-young clutch hands for emotional support and Jae-young offers her other to Yeon-doo instantly. They’re friends now, one group of friends, behind one cause, and thus they truly became one team. Jae-young has allowed the last bridge to be built between them.

Sassy, Go Go is just as strong in its middle stretch as it was in the opening episodes. With only four more to go, we can only hope that it ends just as excellently.