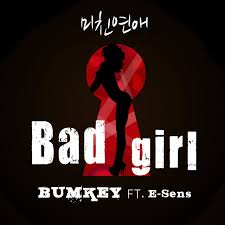 A few months ago, we talked about bad boys in K-pop: how they’re perceived, and how they’re portrayed in the many, many, many songs about the rapscallions everyone hates to love. But what about their female counterparts? Bad girls are no less prolific, but they offer an interesting dichotomy that bad boys don’t. Across the board, bad boys are seen as, well, bad. But bad girls? That depends more on who you’re talking to. More specifically, their gender.

In many tracks by male artists, bad girls share a great deal with bad boys. The problem is that wild and flirty people don’t stop being wild and flirty when they enter a relationship. Thus, those relationships can sour very quickly, even when the passion is still there. Bumkey and San-E‘s “Crazy Love (Bad Girl)” is one such song. The girl in question is a player, who breaks boy’s hearts for sport, and yet can’t break away.

Baby you’re my queen, my everything
I can’t live a day without you
I know we shouldn’t do this
But I keep falling for you

Of course, the male perspective on bad girls has a nasty underbelly, with some not-so-slightly misogynistic overtones. A great example of this is Beast‘s “Bad Girl“.

No matter how much I think about it, it doesn’t make sense, bad girl
The thought of you keeps making me crazy, you bad girl
Even though I screamed at you asking you not to leave
You didn’t even look back, you bad girl 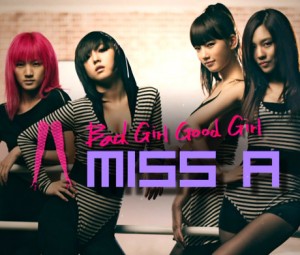 Here, the only thing the girl has done to warrant being branded “bad” is breaking up with her boyfriend. And while that hurts, “Bad Girl” is over-the-top in railing against this now-ex. Blaming her for their inability to stop dwelling, referring to her at a “hate girl” in the same breath that they’re pleading to get back together, it’s uncomfortable. In “Bad Girl”, all a woman has to do to be ‘”bad” is make choices that men don’t like, as if Beast’s masculine egos are so fragile that being dumped can only be accepted if the girl is slandered.

This is the perspective that Miss A rails against in “Bad Girl, Good Girl“. They point out that the boys labeling them as bad have no grounds to do so. Miss A might look bad because they’re independent and have more suggestive dance routines, but so what? These boys don’t know them. They might look bad, but on the inside they’re a far cry from the manipulative, uncaring girls that actually are.

On the outside, I’m a Bad Girl.
On the inside, I’m a Good Girl.
You don’t even know me well, you only look at me from the outside.

This is the where things start to get interesting with bad girls. Because while boys talking about bad boys tear the concept down, female artists have adopted the moniker of a “bad girl” as an ideal to live up too. Bad girls are tough, confidant and in control, even SNSD has wanted to be bad. 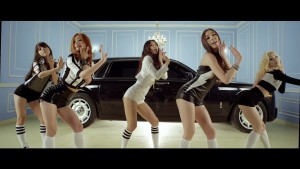 Their “Bad Girl” provides the inversion of Beast’s. Their badness comes exclusively from their deviation from the ‘normal’ female attitude. They were the pants in the relationship and if you can’t get with that, get out. It’s almost a ‘then let me be evil moment’, with the ladies decide that if being in control makes them bad, then bad they’ll be, the “perfect bad girl”, even.

If SNSD are Beast’s bad girls, than Ladies’ Code are Bumkey and San-E’s. They fully admit to being bad people as well as bad girls. Heartbreakers, players, liars, easy, bad; you name it, they are it, and Ladies Code are so with a not immeasurable amount of pride.

Things that others say, the things that are all true
You can point at me
And call me an easy girl, a bad girl
I don’t care

I’m a bad girl. Yes, I’m that kind of girl
A person who deceives for love
Who doesn’t know how to hurt or cry

Ladies Code are what they are, and make no apologies. After all, if they’re not bad girls, then they’re the nice girls who get used and ignored. They’d much rather be the top dog, thank you very much.

Of course, while Ladies Code are upfront about being bad, there’s one song that turns the expectations of bad girls back on those who judge them: Lee Hyori‘s “Bad Girls“. It’s an ode that points out every negative stereotype about bad girls and follows them up with a clear “and your point is?” 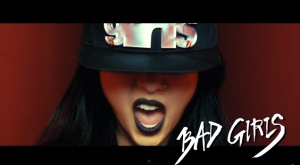 The qualities Hyori outlines for bad girls are ambition, competitiveness, seductiveness, a charming bluntness, refusing to pretend to be stupid, and confidence. These are not inherently bad qualities, they’re just not ladylike. And as Hyori calls for bad girls to “do it one more time”, she’s not expressing any remorse for her badness, and encourages other girls to join her.

The bad girl is a complicated character, far more so than her male counterpart. They can be bad people or just fail to embody societies expectations of good girls. And when good girl is such a narrow definition, is it any wonder so many girls decide to go bad?