Seven boys sit around a rectangular table. They look somewhat nervous and uncomfortable, but they’re mostly smiling as they play a game among themselves. The shaky handheld camera that’s filming them focuses in on the two at the end of the table. The one closest to the viewer leans over and hits the boy to his right in the ribs. A few seconds later, he hits him again on the back and then flicks the other boy’s hat off. The other five around the table laugh as the boy scrambles to grab his hat off the floor.

The scenario above might not seem like a big deal to some. If the camera hadn’t been there, it probably wouldn’t have been. However, the camera was there, tens of thousands of viewers were watching in real-time, and the seven boys are the members of YG‘s heavily anticipated new boy group iKon.

The two boys at the end of the table were iKon’s leader, B.I., 19, and youngest member Chan-woo, 17. Neither are strangers to K-pop fans or to controversy despite the fact that iKon is a group that has yet to debut. Chan-woo’s introduction to the group during the hit reality show competition Mix & Match (2014) caused a lot of speculation as to whether or not he deserved to join the group at all after having had very little training. Meanwhile, B.I. faced his own television-based scandal in 2014 when he joined the cast of Mnet‘s popular rap competition program, Show Me the Money. His skills were called into question when he forgot his lyrics onstage and was considered by many to have been given preferential treatment by the judges. Of course, neither of these past controversies has anything to do with what happened during iKon’s most recent live broadcast on Naver‘s new V app. 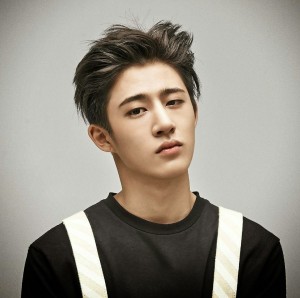 After flicking Chan-woo’s hat off, B.I. was rewarded with a piece of beef, and the game the members were playing went on. The incident was seemingly quickly forgotten, at least among the members. However, many viewers weren’t so quick to brush off what they saw on the broadcast. The question of whether or not B.I. was bullying Chan-woo was raised, and gif-sets of the encounter between B.I. and Chan-woo were used as evidence of the claim. On Korean and international forums, B.I.’s intentions were called into question. His past controversies were brought up as a way to determine his character, and Chan-woo’s introduction into the group was also revisited as fans tried to suss out if he was being treated unfairly by the other members. Most fans seemed to conclude that B.I. was being too harsh and, in more simplistic terms, that he was a jerk.

In the heavily scrutinized world of Korean entertainment, all it takes is one misstep, and netizens all around the world will bring out the proverbial pitchforks and get ready to roast. A scandal, once it starts snowballing, can be devastating and career-altering. Any impropriety — or even the mere appearance of impropriety — has the potential to be a career killer. No one knows that better than T-ara, the comeback queens who were leveled by a bullying scandal at the height of their fame in 2012. More recently, actress Lee Tae-im also felt the brunt of bullying accusations earlier this year when she and her cast mate on Tutoring Across Generations, singer Yewon, had an on-camera argument. The two women’s careers have both suffered as a direct result of the scandal that ensued.

With iKon’s debut date looming, a bullying scandal could cause B.I. a lot of problems. The relationship between the leader and Chan-woo is now the subject of intense scrutiny. One more wrong move and the reputation and growth of iKon as a whole could be affected. However, no official statement has currently been issued by YG Entertainment. The members of iKon aren’t publicly active on social media, so there have been no comments directly from B.I. or Chan-woo about or after the offending broadcast. B.I.’s true intentions may never be known or addressed, as well as how Chan-woo felt during the incident. Were B.I.’s actions misconstrued by the viewers or was he bullying Chan-woo? Were the other members of iKon silent participants if bullying was indeed going on?

Since these questions will probably only ever be answered with speculation and theories made by fans and onlookers, a better question might be whether a quick snippet of video should be used as absolute damning evidence against a person’s character. In a scandal such as this, where no actual criminal act was committed, the only thing that’s really on trial is B.I.’s personality. But in a business that relies on selling a certain image, an idol’s personality is a large part of what makes them valuable. In the two examples above, the quick rush to condemnation was devastating for both T-ara and Lee Tae-im. As soon as they were judged to be guilty in the court of public opinion, it became open season; they were free to be harassed, called names and blacklisted for their supposed ‘crimes.’ They lost endorsements, social standing and fans, all for a quick word or action that could be easily misinterpreted. It’s too early to tell how or if B.I.’s future will be affected, but it’s not too far off the mark to say that one careless action shouldn’t have the power to destroy a whole career.

In this age of non-stop exposure for celebrities, somebody’s always watching. It’s a balancing act, especially for K-pop idols, who are in the awkward position of having to appear as ‘real’ and relatable as possible, all the while maintaining a flaw-free image. It should take more evidence than a gif-set or a six minute video to judge the full intent behind an action, but unfortunately, most idols aren’t afforded that luxury. B.I., Chan-woo and the rest of iKon are about to be thrust into the worldwide spotlight, and every movement they make will be scrutinized. One misstep could alter the course of a career entirely. B.I. may be the first member of his group to get that harsh lesson, but he most likely won’t be the last to learn it.