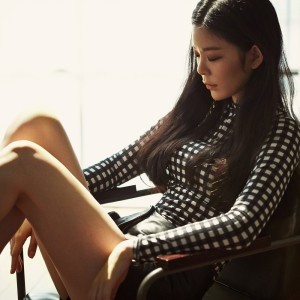 Summer is an exciting time for South Korean music with upbeat anthems like SNSD’s “Party” and an endless parade of comebacks. With so many big names battling it out, however, it’s easy to miss some good songs. So let’s take a look at some singles that you can add to your summer playlists!

“Mannequin” brings up the love hate relationships with beauty standards a lot of women can relate to. Suran sings about how she wants to be like the beautiful woman in the street who catches her boyfriend’s eye. Specifically, she sings about a woman from Garo-su Gil which is in Gangnam (the part of Seoul known for its high-end stores and even higher beauty standards). The woman is chic, slim, and elegant all at once. Suran in the chorus sings:

But then she sees how these eye-catching women are more like “flowers without a scent.” They are pretty, but not real. This could refer to the rampant plastic surgery in Gangnam, or the shameless amount of photoshopping in magazines and even commercials; we all know that these images aren’t real. Ironically, in an attempt to be stylish by looking different, they all end up looking the same. And yet despite this knowledge, both Suran and women hold ourselves to the same unrealistic expectations. We hate the fact that there are these high standards, but at the same time want to be a part of that exclusive club of seemingly effortless beauty.

The video is interesting because the actual girl has a mask while the mannequins are completely human. The masked protagonist spends her time on the street trying to get money to buy clothes from the boutique. At times she switches places with the mannequins and is trapped behind the glass while they walk down the streets like it’s a runway. No matter what side of the glass she’s on, she’s trapped by the beauty standards. And just like in real life, no matter how much money she makes, she is never able to shed her mask to become a mannequin; it’s an endless cycle.

In May, Zion T. asked his crush to make sure to eat and stay healthy. Jane Jang wants you to eat for a whole different reason. In “Eat,” she sings about the funny, happy, and awkward parts of taking the next step in a relationship. The song sticks out because Korean women being openly sexually active before marriage is still taboo. Particularly shocking was seeing the first scene where the camera zooms out to reveal she’s sitting in bed with a man (who has obviously spent the night). Like Ga-in’s “Bloom,” the music video and song normalizes this part of the relationship instead of making it into something shameful or hypersexualized. Jane Jang’s unique voice and the soft music give the subject of intimacy an innocent and playful makeover.

We, still a little awkward, know we need more time together
No need to hurry, we’ll go slowly. Let’s go downstairs and eat something anyway

The music video also shows how normal her relationship is. Her wardrobe is soft and comfortable, her makeup is subdued, and she even walks barefoot in the grass. She shows that her version of intimacy is the most down-to-earth and realistic. “Eat” is so normal, it’s groundbreaking. If you like this song, check out her other single “My Satellite.”

“Love You Dear” doesn’t have a lot of lyrics, but that gives the solos and interesting layers of music a chance to shine. It combines a little bit of everything into a memorable summer anthem. It’s so upbeat that you almost don’t realize it’s a bit of a breakup song. The singer professes his love, but at the same time wants the best for his love interest.

A heart covered in time, the last of sunny days
You’re right, your very own long game ends here

Whenever there’s a new heart coming, that’s for you
I only want to give you good memories, for you

The video is fun to watch with the lead singer running around the back alleys of South Korea. He has a lot of fun interacting with random people and always ends up with the rest of his band at the chorus. It’s a simple video, but conveys the energy of the song well.

Summer is great, but not for everyone as Boys Republic proves in “Hello,” a song for post-breakup blues. The song can have two meanings because “hello” can be used both for greeting someone and for asking if someone is there. So if you interpret the lyrics with the first meaning, it’s a guy talking to his ex-girlfriend directly; he is trying to hold it together, but he can’t help but share some of his sadness. But if you use the second meaning, it’s a guy who calls out for someone who never responds; his pain just echoes off of the walls. Either way, it explains how hard it is to forget someone nowadays, especially when social media makes it so tempting to see how that person is coping.

Hello, how’ve you been?
I really want to ask you if you’re OK without me, even if I’m not doing fine these days.
Hello, how are you doing?
Actually, I’m sneaking on your timeline. After you left me, I’m always around you, like I got lost in a maze.

Finally, “Honey Summer” brings us back to the upbeat and fun feelings we usually associate with the season. The beach scenery, vibrant colors and NS Yoon-G’s bright personality are the perfect partner for the lyrics. The MV reminds me a bit of Sistar’s “Touch My Body” or “Shake It” in that the video is flirtatious and cute without infantilizing the singer. Even though it has a light tone, she is still not that different from the character she played in “Yasisi.” NS Yoon-G wants to have fun with her boyfriend, and isn’t afraid to invite him to look at her in a bikini. There’s nothing particularly original about the lyrics, but it is just a fun summer song to bop along to.

So those were my picks for June! Summer is always a good time for upbeat songs, and I’m looking forward to reviewing July releases. So, are there any songs you think should be put on a summer playlist?