Living Up To Their Name, BTOB are "Complete" 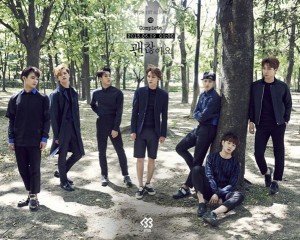 BTOB has been gaining more attention lately and for good reason. They have amassed a stable fan base over the years but have not been able to have that one crossover hit to catapult them to the higher tiers of K-pop stardom, despite having some strong singles in the past. With their vocal line gaining more attention on singing shows, such as Mask King and Immortal Song, the group has been associating their name with talent and quality. In addition, Sungjae has been gaining a lot of positive attention on his numerous variety show stints.

That aside, the group had a positive run of increasingly popular singles, with “Beep Beep” and “The Winter’s Tale” being their two highest charting singles to date. This time around, they have gone the unconventional route using the ballad-led title track “It’s Okay” to kick off their first album Complete. This album shows maturity not only in their sound but also in their artistry. Members Minhyuk, Ilhoon and Hyunsik contributed in composition, lyrics and arrangement for almost every track on the album.

The album starts off with a rousing intro “Complete (Intro).” If the start of the album was any signifier, the vocals of BTOB are no joke. In complete acapella form, the boys hit hard with beatboxing and strong harmonies. E.One did the production while Minhyuk and Ilhoon both contributed rap verses. “Complete (Intro)” hints at the undertones of the mix of hip-hop and gospel the boys dabble with throughout the album. It is a fantastic start that hears the boys hit the beats hard.

The transition to “It’s Okay” is an abrupt shift in energy. With lyrical contributions from both Ilhoon and Minhyuk, the title track is noticeably slower than the intro. “It’s Okay” has all the makings of an outstanding song wrapped up in the BTOB style. There are little beatbox beats sprinkled amongst the uplifting production. The lyrics are encouraging and well-constructed.

“When you’re having a tough time, and think that you’re alone, listen to this song.

Look forward to it, the melody that you enjoyed listening to.”

The members tell listeners to hear their melody when they’re feeling down. It is a nice nod to their fandom (Melodies) as well as falling in line with the content of the story. Eunkwang simply kills those notes, and Ilhoon’s rap is a highlight as well.

“Live Well Yourself” transitions well with the beatbox beat aiding the shift to the mid-tempo number. This almost sounds like a Boys II Men track because of the harmony and vocal runs. It all comes together quite nicely — the BTOB take on a gospel ballad. The vocal line of Eunkwang, Changsub, Hyunsik and Sungjae comes together nicely with solid harmonies. The lyrics are bittersweet as the track recalls past relationships in the hopes that the other person will live well. 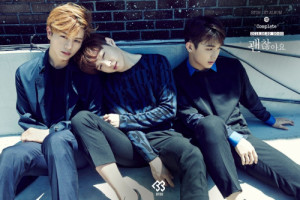 Hyunsik also helped to compose and write lyrics to “One-Man Show.” This song definitely picks up the tempo and has a nice little brass section and new jack swing element that is another auditory signature of the group. The lyrics spell out the struggles of bachelor-dom and the difficulties in finding the right girl. The song is fun, and there are some memorable lines including an onomatopoetic nod to Chicago coming from Peniel.

Once again, things shift gears going into “Summer Romance.” The brass leads into the melancholic number. Hyunsik helped with the composition and lyrics while Ilhoon and Minhyuk contributed rap verses. “Summer Romance” has the tints of the close of summer. The doo-doo-doos during the chorus add to that effect. BTOB show subtlety in their emotions as getting to know someone over a short seasonal period can lead to wistful recollections of that time.

“My Friend’s Girlfriend” was composed by both Hyunsik and Ilhoon — with Minhyuk helping with lyrics. There seems to be a trend with BTOB compositions having a higher tempo than other songs on the album. “My Friend’s Girlfriend” maintains some new jack swing elements. The swinging beat works well with the disparaging singing and lyrics. The boys are torn as they seem to have fallen for their friend’s girlfriend.

I shouldn’t be like this, but I don’t know.

Was this guy my friend

or is he a devil who captured my love.”

The boys are frustrated about the unfortunate situation but can’t help the way they feel. The vocalizing effects at the end of the song add to this struggle to not feel. Deviating from these feelings steeped in guilt, their voices are altered to almost robotic proportions. They want to normalize the feelings they shouldn’t be having.

“Her Over Flowers” is the mid-tempo pop piece that borders on saccharine. It’s probably the most sugary tune on the set and can work as an anthem with the “heys” thrown in at the end of the song. The chorus sounds like it is meant to be sung in conjunction with a crowd. Despite not being my cup of tea, the “beautiful to me” hook is quite catchy.

“I Want To See You” was another production by Hyunsik. It lowers the tempo a bit and works as a slow burner. There is a keyboard synth production that punctuates the beat. The main chorus features a catchy lyrical refrain, and this song just burns with desire.

“Yo-Ho-Ho” immediately changes the tempo and tone. It seems to be a euphemism for sex saddled up in a horse metaphor. The song ventures between the heavy production and beatbox beat. It feels a bit out of place as it is a big departure of tone from the rest of the album and is wedged between two slower songs as well. 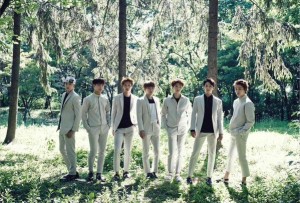 Things slow down on “Open.” Composed, arranged and written by Minhyuk, this song is simply about feeling seduced by a woman. The lyrics plead for her to “open your heart to me.” “Open” is groovy and allows for a different type of tone in the singing that is refreshing.

“Insane (Acoustic Ver.)” strips down their debut song. With an acoustic guitar and finger snaps backing them, it shows how far their sound has come. The members have certainly shown growth in their team chemistry and delivery — being able to convey emotions across a gambit of production (including stripped down production in this case).

“Shake It” is the last production contribution from Hyunsik on the album (it was also featured on their mini album Move). The upbeat number dabbles between a mix of rock and synth driving over a deep bass line. While BTOB has made a name for themselves as serious vocalists, they have this quirky fun side to them, too. The funky keyboard synth breakdown at the end is sheer unadulterated joy. The unbridled energy makes this a standout of the high energy tracks on the album.

Ilhoon’s solo “Everything’s Good” is a fitting close to the album. It is piano led and has some backing adlibs. The mix of singing and rapping is well put together, and the lyrics tell an intimate part of his story. Ilhoon’s struggles have to be hidden because he is going to scrutinized under the public eye. Instead, he laments that he will say that things are okay even when he’s struggling under pressure and other problems.

Complete is a superb first full album from BTOB. It has them taking their next major steps as serious artists. Their sound is becoming better developed, and their vocal and rap lines are reinforcing their strengths with marvelous production. My main gripe is with the flow of tracks; they are a bit uneven as some slow tracks are sandwiched with fast tempo songs — making the tone feel all over the place. The material is extremely intriguing and the group’s distinctive sounds come together well over numerous compositions. Complete soars often as the emotions in the vocals are laid over almost gospel-like instrumentals. There is an honesty that comes through, not only in the the lyrics but also in the singing and rapping. While not perfect, Complete still symbolizes a significant step forward for the group and surely a high note in the group’s career.