Infinite Diversifies their sound in "Reality" 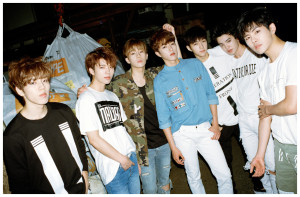 Girl groups have been getting most of the attention this month with comebacks, but the boys aren’t shying away from the foray either. Infinite also joined with their 5th mini album, Reality. This year also marks the group’s 5th anniversary, so what did they present for the occasion? A solid mini album with a little bit of variety.

The album opens with the introduction “Betting on You,” which was produced and composed by Rphabet. The short song features a heavy orchestral melody paired up with grungy electronic backing – just like title (and the next) track, “Bad.” With Sunggyu‘s repetitive vocal line of “betting on you,” the intro tracks pushes forward until it ultimately crescendos into an abrupt low-octave ending.

“Bad” has been reviewed, so there’s not much else to add. It picks up where the intro leaves off (including the same “betting on you” lyrics) and continues the orchestral trend. Despite being stylistically different, “Bad” does hold true to one of Infinite’s greatest strengths (or weakness, depending on who you ask): the repetitive hook. If you listen to their previous work, you know they often repeat a particular lyrical line consistently through a song, and it’s a good thing because it gives the audience something with which to sing along. “Bad” doesn’t disappoint in this respect, so there’s still the classic Infinite element included in an otherwise unusual title track. The track does appears to have Inspirits squaring off about whether or not this is better than “Chaser,” but regardless, “Bad” is a great song.

Rather abruptly, listeners are transported to an amalgamation of orchestral music and the disco of the ’70s with “Moonlight.” There’s a plethora of strings running through the song, and those are combined with a disco beat and some electronic sound effects. A confession in the night, “Moonlight” speaks of running toward a love with the help of the moon.  In a very “Infinite” move, there’s no rapping in the song. Hoya and Dongwoo partake as vocalists for an entire song, which shouldn’t be surprising, since they’ve done it before and will do so again later on in Reality. 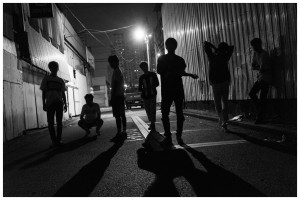 “Footsteps” is a bit confusing: is this pop, Infinite’s take on R&B, or pop and R&B combined? The track has a rather smooth tempo and beat, yet there’s futuristic instrumentation happening in the background. The rap line is also more prevalent than the previous songs and flows well with the overall song. Infinite’s vocalists don’t have the particular color needed to carry an R&B song, but it’s not a bad attempt at the genre. From a lyrical standpoint, “Footsteps” is anomalous compared to the other songs. It’s not about a girl or love, but rather the struggle to find one’s path. This concept isn’t what you’d typically associate with a composition like “Footsteps,” but it somehow works.

Was “Standing Face to Face” a song meant for Sunggyu mistakenly given to Infinite as a group? What is this rock song doing on an Infinite album? Jokes aside, “Standing Face to Face” is particularly attention-grabbing. Listeners are misled into thinking this will be a normal ballad until the chorus, when the guitar and drums kick in. Infinite does a very good job at putting the requisite emotions pertaining to the reticence of letting go of one you love, and keeping the song within the realm of rock. It’s different from “Love Letter” in that there is more oomph and color, from Woohyun and Sunggyu’s power to Sungjong’s softer, high-pitched vocals.

As a rock ballad, “Standing Face to Face” stands out from all the other songs, but yet smoothly transitions into the more classic pop ballad, “Love Letter.” It would be good to see the group explore this genre together more, since we know Sunggyu can already pull it off quite successfully.

Beginning with the requisite prominent piano, and adding in drums and some guitars, “Love Letter” is nothing unusual in terms of a ballad. Despite it being typical, it’s still a very nice song. Perhaps this is due to it being Infinite – who tends to excel at such things while not being a vocal group – or just that I like ballads. Written as a confession (supposedly for fans as mentioned in the above video), the song is the heartfelt feelings expressed in a love letter. It’s a bit cheesy lyrically, but most love letters are, so no harm, no foul. “Love Letter” is essentially an uplifting, flowery love song.

Lastly, we have “Take Care of the Ending.” Yes, the lyrics are in the context of a relationship, but the lyrical view can be taken to another place: the ending of the album and wanting a happy ending with their album/careers. This optimism and hope is reflected in the music as well. “Take Care of the Ending” is a bit of ’80s pop that is upbeat and groovy. The song is danceable and a mood-lifter, which makes it a good ending. 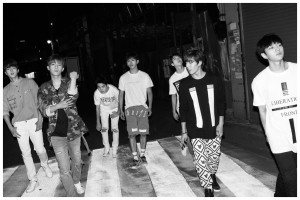 So, since the album is titled as Reality to represent where Infinite is at the present time, what really is Infinite’s musical reality? Is it their throwback pop sound with intense synchronization, or a mish-mash that explores different genres and styles? If Reality is any indication, it’s the latter (Dongwoo would agree). The album dumps the “Infinite sound” to show the group is not just one-dimensional. Infinite is able to alter their sound and do different genres, whether fans like/are accustomed to it or not. Their efforts in not becoming stagnant – which a lot of other artists should consider – should be applauded.

Infinite’s joining the popular group comeback avalanche is a bit exciting. They were long the “trend idol,” so they have fans, but going against older, bigger groups is a gamble. And to do so with a title track that slightly diverges from their winning usual style is even more so. Perhaps this is just a step in a quest to actually show that they’ve found a level of comfortable popularity that they don’t need to release the same old song to stay relevant.