Sixteen Episodes 1-5: Are You a Star? 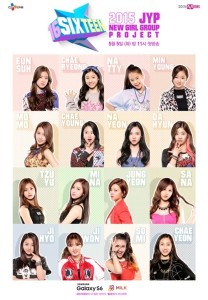 JYP has joined in on the pre-debut survival show trend that has become prevalent in the K-Pop industry, and launched his own Mnet program, Sixteen, with sixteen of his female trainees competing to debut in the company’s next girl group.

The premise of the show is simple – the trainees are divided into Major and Minor teams, with the Major team receiving star treatment while the Minor team receives the average trainee treatment. The group is required to undergo a series of missions, after each of which there is a change in the Major and Minor lineups as determined by Park Jin-young himself, and one elimination from the Minor team. The final survivors will win the opportunity to debut in JYP’s girl group in the works, Twice, while eliminated members will have the chance to debut two years later.

The selected trainees are a diverse group, containing three Japanese members (Momo, Mina and Sana), one Taiwanese member (Tzuyu), one Thai member (Natty) and one Korean-Canadian (Somi). Like with most trainees nowadays, they are also fairly young – the oldest member, Nayeon, is 19 years old, and the youngest, Natty, is only 13.

For that reason, I also have my reservations towards some of the younger members debuting – although the K-Pop industry does have quite a few early debuters such as BoA and Taemin of SHINee, I’m all for some of the members in the 13-15 age range gaining some more maturity and also a few more years of training before joining a girl group, especially given how harsh and competitive the market is. That being said, these members don’t lose in terms of talent and confidence in comparison to the rest of the group.

With five episodes and four missions aired up to date, the potential positions of the members in a girl group have become apparent. At least six of the members have main/lead dancer potential (Momo, Natty, Mina, Chaeryung, Chaeyeon, and Eunseo) and many more are decent in this area, but only arguably three members are solid vocalists (Minyoung, Jiwon and Jihyo), and this imbalance in the dancers and singers is a clear weakness of the group.

Chaeyoung is definitely the rapper in the group, and Minyoung is also surprisingly good, as shown by her most recent “Problem” performance. Almost every group also has its purely visual members, and in Sixteen it’s mostly Tzuyu and Somi – their stage presences are impressive and show promise, but in terms of raw skill some additional training would work in their favour.

The case is the opposite with some members such as Minyoung and Jiwon – while they have the talent to back them up, their lack of confidence prevents them from standing out. That confidence is what allows each individual to show off their unique charm, and the inability to do so was a large factor in what resulted in Chaeyeon and Eunseo’s elimination. I liked how Somi and Jihyo, on the other hand, were able to embrace their individuality, as Somi addressed those who had called her a “mutt” for being mixed race with a Taekwondo performance on her first stage, while Jihyo, after being moved down to Minor because her photographer thought she was too chubby, sang “All About That Bass” as her song in the third mission. 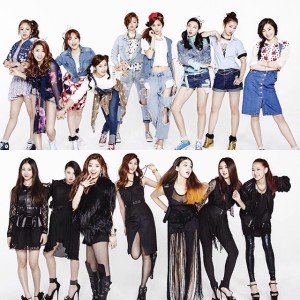 A few members of the group are proving to be stan attractors, prominent in the weekly popularity polls shown at the beginning of Sixteen episodes.

Nayeon had the most buzz surrounding her based on the teasers alone, but after the pilot episode, Dahyun shot to fame with her infamous eagle dance – she was the biggest winner of that episode alone, earning high praise from Park Jin-young. However, these two members are also model examples of “the higher you go the harder you fall” – over the course of the recent few episodes, public view of them has changed, as they are getting increasingly dragged for their “bad personalities.”

This sentiment should be taken with a grain of salt, though, as while both girls are definitely confident (Nayeon’s made that clear enough in her interviews; Dahyun appeared to be in disbelief when asked to move down to the Minor team at the end of the second mission), I don’t find either particularly rude. Meanwhile, Jungyeon is taking the crown with her charisma and cool personality. I also see Sana getting there some time in the near future, given the 4D personality she showed on her first stage, and Chaeryung is also earning some love for her adorableness.

The program itself has quite a few flaws. With so many trainees, it is difficult to sufficiently spotlight each one, and in the beginning, not only were some members easily forgotten, earning only 2-3 minutes of screen time each, but just the attempt to show each member at least once became redundant from an audience’s point of view. With the first mission, the majority of Park Jin-young’s comments were simply varying versions of “you did a good job because you were being yourself on stage” or “you proved you’re talented but you haven’t showed me who you really are,” while in the second mission, one can only take so much of watching people talk about pictures without becoming bored. The most recent mission is better in the sense that there are only four stages to watch. This comparative scarcity of performances is keeps viewers interested, and also leaves time to showcase the members outside of training, doing things like meeting their family or hanging out. 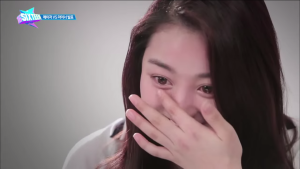 The show also purposefully instigates strong competition between members. While survival shows are naturally competitive, the rivalry is further enhanced by the design of the program, such as by the splitting of trainees into Major and Minor. Some girls were clearly humiliated by the split, such as Jihyo, who trained for ten years only to be placed in the Minor team.

There is also an unnecessarily large difference in the way the two groups are treated – it really does seem like too much to move the Minors into a dorm with a pile of dog poop, which was purposefully placed there because I can’t imagine how dog poop would end up in a shelf otherwise. An ongoing rivalry that is prominent between two members in particular is between Momo and Natty, which started as simply Natty taking Momo’s Major position in the first mission, but developed when Momo failed to do the same in the third, and most recently, the two were pitted against each other in the most recent team performances as well.

While this seems like a small thing happening on the side of the larger plot, Momo appears to be bothered by it to some extent considering she had even mentioned it when video-calling her mother in episode 5. On the whole, I can understand the rationale behind instigating competition – it encourages the trainees to work harder. However, at the same time, it does seem to be slightly ruining the dynamics of the team as a whole, which may not be beneficial because a select group of them will be debuting together. 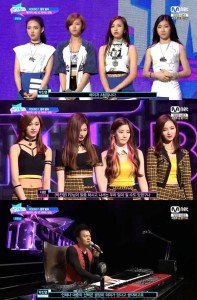 Finally, on the subject of team dynamics, the most recent mission containing team performances was the most interesting by far, as all four groups did well and are showing continual improvement compared to their previous two performance missions. Both three member groups did better in my opinion – Minor A was brimming with raw talent, given they had the best singer, dancer and rapper, and their performance was also the most hard-hitting and cohesive, but Major B won in terms of song choice and stage presence. On the other hand, Minor B pulled it together surprising well in the end considering the internal conflict that ensued when two members were late for rehearsals, but there were some sloppier parts of the performance, such as the rap parts.

Major A, like Major B, showed a more cheerful stage with “Happy,” but the song is slightly more difficult to work with in comparison to “Uptown Funk” because of its toned-down nature. The performance was also more casual – it had some “acting” and a freestyle dance segment during the bridge – which made it more creative; however, the performance also lost some of its cohesiveness as a result. In the end, it was Major B and Minor B that claimed victory over their counterparts, and I’m suspecting Park Jin-young to regret his decision to give 100% of the power of choice to the audiences’ votes, because both results seemed to go against his wishes. That being said, it is important now to evaluate the value of popularity against the value of the producer’s opinion – is the combination of members that secures the most fans likely  to earn the group the most success?

While the way Sixteen is designed may not be ideal, the trainees are keeping me interested in watching, and if that’s the case for most, the show is achieving its purpose – to gain fans of the group Twice pre-debut.

Viewers of Sixteen, what do you think? Who are you rooting for? And to those who have watched other pre-debut survival shows, how does Sixteen compare?