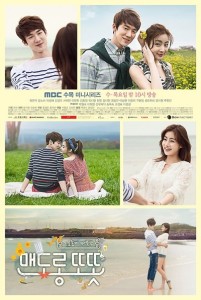 My life as a K-drama relator (along with my imaginary gamut of well-written-with-substance K-dramas) met with an upliftingly verdurous range of mastery after watching the first two episodes of the famous Hong Sisters’ MBC drama Warm and Cozy. Upon hearing that this K-drama would feature the acting chops of Yoo Yeon-seok and Kang So-ra, I was enthralled to envision the humanity put forth by these two talented souls into creating something as beautiful as Jeju Island itself. The most refreshing idea about this favourably expedient project is the automatic knowledge that we won’t be seeing an overtly innocent second lead without love in Yoo Yeon-seok’s charming character Baek Geon-woo and that we will see a solid resurrection of Kang So-ra’s hen-among-cockerels perseverance in her diligent character Lee Jung-joo.

Further accentuating the superlative sensibilities of Warm and Cozy is the source of its inspiration. A supposed retelling of one of Aesop’s beloved fables, “The Ant and the Grasshopper,” the Hong Sisters ingeniously arrange for the translation of Yoo Yeon-seok’s character into the lax grasshopper that croons without a care during the summer, while Kang So-ra’s character embodies the sensible ant who forsakes complacency and enjoyment, choosing to gather food for the winter instead. The polarity of these two characters is magnificent and provides leeway for a greater moral to the story — as well as immense growth, whether romantic, platonic, or personal — that opposites are wont to adopt in the company of one another, love rivals, and potential antagonists. Through the ambivalent moral lesson showcased in Aesop’s original fable and its emphasis on planning for the future, the mode in which it will be transformed within Warm and Cozy and its characters occupies a most unique and suspenseful place, tempting viewers to hold on for a bumpy cruise in a crimson red BMW at the crossroad of cosmopolitanism, as it inversely tours the steadfast resplendence of Jeju Island. 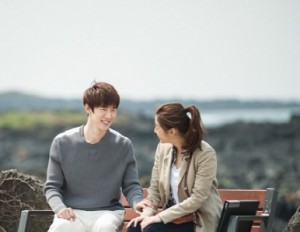 The first meeting of the main leads of Warm and Cozy, Baek Geon-woo and Lee Jung-joo is hilarious in its unconventionality and artlessness: no sparkling eyes baring the heart, no perfectly accidental skinship, and no dissemination of flowers and fragrance. In fact there is no semblance of romantic inclinations or aspirations, the case is one of mistaken familial relations. As soon as Jung-joo passionately confronts Geon-woo and claims that they are twins, the drama presents an overarching and sombre undertone to the overall story about their parents, specifically Gun-woo’s mother and Jung-joo’s father. The duplicity of the very first scene in Warm and Cozy is commendable in its balancing of the comedic devices that define a romantic comedy and the serial emotiveness of melodramas.

Tying the introductory sequence of the drama in a pretty ribbon and appearing frequently throughout the first two episodes is the evolution of Geon-woo and Jung-joo’s level of familiarity and carefree chemistry after they find out that they aren’t in fact siblings with one another; he is absolutely the gentle, albeit foolish, prince she quietly cherishes in her heart, and she is definitely the valiant prude he wishes he had met earlier. 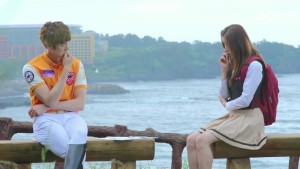 Among the supporting characters we find a significant aura surrounding Kim Hae-sil (Kim Hee-jung), a deep-diving ahjumma with an unexpectedly well-glossed pout who hates Geon-woo to the core but may prove to be one of the missing links in his ambiguous parentage. Mayor Hwang-wook (Kim Sung-oh) is not only a covert love rival vying for Jung-joo’s attention the moment he sees her, but his history and past association with the undergarment company she worked with proffers yet another comedic spice to Warm and Cozy and deepens his connections with the possibility of a life of privilege and wealth similar to Geon-woo. As all worthy leads are subject to endure, we may speculate that the suffering of a misfortunate episode caused him to seek the eventide of Jeju Island with a variably half-witted persona over the privileges of chaebolhood and popularity.

The current apple of Geon-woo’s eye and the reason for his fulfillment of an actual goal on his own is epitomized in the urbane and sophisticated Mok Ji-won (Seo Yi-an), who attempts to assuage the pain of the fact that they cannot be together by giving him compassionate glances or awkwardly laughing with him to fill the lonesome silences. Her intentions are vague as of yet, but based on the way she interacts with certain individuals and her generally ersatz expression, it can be inferred that her exterior does not align with her blatantly ambitious, or perchance covetous, interior. With an uncharacteristically snazzy name, B1A4’s Jinyoung serves (pun intended) as Geon-woo’s adept co-worker and best friend Jung Poong-sang. Upon identifying the pill bottle Jung-joo used to inopportunely store her anxiety medication Poong-san as an individual departed from the flower boy persona one would imagine him inhabiting and dove into a dimension of wisdom unattained by a sidekick, making him seem like a reliable genius next to the archetypical infantilism of Geon-woo and a beneficent influence in his idyllic and oft negligent lifestyle. 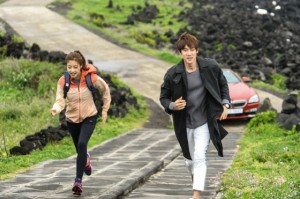 With the rapeseeds in full bloom, wonderful little recipes for cultured cuisine and a mesmerizing sunrise from atop a volcanic crater, the setting in Warm and Cozy is a unique exemplar of exploration and mobility in K-dramas; this ultimately permeates the development of the goals, aspirations and capabilities of the characters. In Jeju Island, I see a haven and space for relaxation, yet Warm and Cozy internalizes the landscape and diversifies it by adding the experiences and travails of young consumers accustomed to the order and stability of the inland attempting to settle down in the pleasurable inconstancy of the mainland. Mixing the stable with the unstable or the desperate with the content makes an agreeably warm climate for perfection.

Readers, what do you think makes Warm and Cozy a meaningful K-drama?