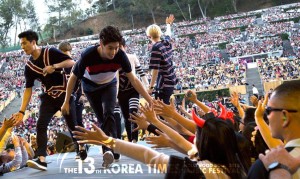 This past Saturday, the 13th Korea Times Music Festival was held at the Hollywood Bowl in Los Angeles. Outside of the concert itself, there was a lot of scrutiny on TMZ’s bit showing a staffer mocking EXID’s Junghwa’s English accent (Seoulbeats discussed that incident in our Roundtable this week). Aside from that incident, the Korea Times Music Festival was a sold out affair this year and harbored a lot of great performances.

The festival continues to bridge the older generation artists with newer idols. A quick glance at the general make up of the crowd revealed a diverse crowd ranging from young children to older folks — all coming together to enjoy Korean music. Prior to the start of the show, one of the attendants stated that we get cozy in the Hollywood Bowl. With the open air arena, bench seating, and a sold out crowd, it equated to one boisterous event.

The audience was first treated to a performance of traditional Korean drums from a group from UCLA. After their rhythmic performance, there was a taekwondo demonstration, which got the crowd excited especially when some K-pop was integrated into the mix. Afterwards, the national anthems of both the US and Korea were sung terrifically.

Heejun, one of the two MCs of the night, was the first official artist on the lineup. Although there were some mic issues at the start, his rendition of Bruno Mars’s “Runaway Baby” was a high energy affair. He joked about being a New Yorker at heart, despite the chagrin of the crowd, and sang “New York State of Mind” right afterwards. He later joined EXID’s Hani to MC the show in both English and Korean.

The second performer was Bada. She brought a lot of sass. In a sparkling gold dress, she traipsed around on stage while belting out notes. Her cover of “Girls’ Generation” stood out because of the jazzier arrangement.

After Bada, Got7 got the crowd hyped. Their entrance was met with a burst of excitement as the first idol group performer of the night. Introduced as the singers of “Hajima Hajima” (“Stop Stop It”), they drove their fans wild. Their movements had a pristine precision accented by their white blazers. It was funny though because as they performed “A” and “Girls Girls Girls,” more of the members started shedding their blazers. The combination of upbeat songs, dry weather, and adoration of the home crowd for Mark probably contributed to the heat on stage. Jackson was a ball of energy and got the crowd together to sing a chorus of Happy Birthdays to BamBam. Another round of birthday cheers was sung for Hani as well.

Entering the arena next were Kim Yon-ja and Oh Seung-geun. Their traditional sounds were an intriguing change up. Kim Yon-ja brought an enka style, which was full of vivacious vocal power. She gave a couple of riffs here and there that got the crowd going and definitely worked the whole stage. Oh Seung-geun followed up with his trot styling. This was another crowd pleaser, and a lot of folks got up to jam along with his hits.

Closing out the first half of the show was Kim Bum-soo. Boy, can this guy sing. We got a short glimpse of it when he sang the Korean national anthem earlier in the evening, but his performances of “Appear” from the Secret Garden OST and “I Miss You” were definitely some vocal standouts of the night. His voice rang true through that arena, and he got the crowd waving their arms from side to side as he hit all the right notes.

Not everyone’s concert experience is going to be the same, and mine got a bit tumultuous during the second half, but more on that later.

EXID came out in full force after the short break. The five ladies rocked out to “Every Night,” “Ah Yeah” and “Up & Down” for their set. LE‘s presence on stage, especially during her rapping bits, was spectacular, and Solji’s voice cut through really nicely in the stadium. “Up & Down” was especially well-received and was a perfect way to kick off the second half of the show.

Im Taekyung was a revelation for me during this show. He has an operatic voice and was boasting some lungs of steel as he pushed out powerful vocals. His arrangement to “Summertime” gave a boost of energy to crowd before Kim So-hee took the stage.

So, from the beginning of Kim So-hee’s set to the beginning of A Pink‘s, there was some trouble in my seating area. A concertgoer sitting near me was quite excitable and screaming loudly throughout the first half. This angered some of their neighbors and resulted in repeated warnings from concert staff and quite the vocal dispute. Unfortunately, for me, the argument inhibited my view and attention. By the time the concert attendee was escorted out, A Pink had finished singing their first song of the night, “Luv.” A Pink was really great live (even among all the craziness in my seating area). Bomi was charismatic, and vocally every member held their own. “NoNoNo” was probably one of the strongest overall performances of the night. They really knew how to get the crowd on their feet and participating during that song.

After A Pink, Cool took the stage and showed a dynamic performance. In red jumpers, they were dancing around, and nearly everyone was either dancing or ecstatically bobbing along. The trio showed that they’ve still got moves as they executed their choreography to a tee. As Heejun stated before they got on stage, the crowd would regret it if they stayed seated during Cool’s performance.

Last but not least, TVXQ took the stage. It was definitely not a surprise to me how excited the stadium got. These two are legends. I remembered seeing them live once before during a SM Town Concert in LA, but they impressed me even more during their set at KMF. They performed “Keep Your Head Down,” and, man, is that choreography impressive to see live with my own two eyes. There was a little bit of old and new mixed in as they brought back “Mirotic” and “Rising Sun” to the stage before closing out the night with “Catch Me.” The audience was living it during the duo’s medley of songs, and it was a spectacular way to end the night.

As all of the artists got back on the stage to say goodbye with a group performance, the bridge between the older and newer generations of idols and artists definitely came full circle. The fireworks lit up the sky above the Hollywood Bowl, and the night came to a close. The 13th Korea Times Music Festival was an extremely well put together show. There was an intimacy between the artists and crowd even in the large stadium. Not only was everyone nestled closely amongst one another, but the flow of the show was great with artists and idols providing a good mix of ballad and upbeat numbers that kept my attention for the night. For my first KMF, it was for the most part a successful and entertaining one.

Did you attend the Korea Times Music Festival? Which performers were your favorite, and which artists surprised you the most?