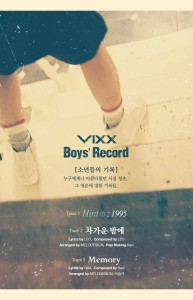 The boys of VIXX are back again, this time with an album that’s short but sweet. Their latest single album features three new songs from the group. Even with such a short tracklist, both the company and the members themselves manage to capture the talents and varied styles that VIXX has to offer mainly because two of the three songs are original compositions by members Leo and Ravi.

The album itself is called Boys’ Record — the jury is still out on whether this means that it is about “a record (noun) that is produced by boys” or if it is simply a sentence  with an inappropriately placed apostrophe and missing an object: “boys record (a record).” Knowing the deep meanings behind many K-pop group names, VIXX included, I feel like the name carries a double meaning. Whatever it is, I’m happy that they produced it, because this tiny little package has left me wanting a lot more VIXX, and fast.

“Love Equation” is first up on the album and is the title track. The song was actually written and composed decades ago and performed by the band R.ef in 1995. (Side note — this is why Hyuk‘s legs are featured on the album cover; our maknae was born in 1995, and so the boys said on Ask in a Box that they thought it would be fitting.) Being the title song, it was promoted with an MV that was cute and fun without being sickeningly sweet. The MV concept fits the song well and is a refreshing break from VIXX’s last (and darker) comeback “Error”.

Instead, “Love Equation” is upbeat and cheerful. The beat is vaguely reminiscent of ’90s dance music, with subtle flavours of the trot music that was still clinging to mainstream popularity at the time. The chorus is especially catchy and the song is just a fun dance track overall. It has definitely been updated from its 1995 version for a 2015 audience, with the tempo increasing slightly and the key altered to suit the members’ higher range. Though the song is clearly produced in 2015, with more electronic instruments, it still retains the 1995 soul and spirit of the original.

In the same vein, the rap parts were completely changed by Ravi, though the lyrics remained true to the original: all about, surprisingly, dealing with a breakup. The lyrics and the mood of the music somehow work together, especially during the chorus when they sing “Have you ever broken up with someone on a sunny day? It’s worse than a rainy day.” Despite all the gloominess of a breakup, the sun keeps on shining, and life goes on. 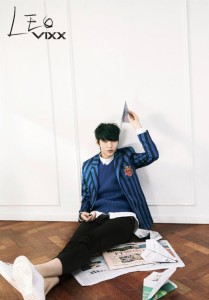 I hold high expectations for VIXX performance-wise and was not disappointed. The vocal line delivers all of their lines beautifully, and the harmonies are great. Even Hyuk, notorious for barely receiving any note-worthy parts, gets full lines to sing — really sing — instead of just random phrases to say in the background.

We switch gears from fun and cute to the next song on the single. “On Cold Nights” is the album’s ballad, a piece both written and composed by Leo.

For his first published composition, I am quite impressed with Leo’s talent as both a performer and a songwriter. I found the lyrics beautiful, although they consisted of the standard ballad fare of feeling sad after a breakup. Nevertheless, the melody of the song fit the poetry of the lyrics like a glove. Leo understands both composition and writing and makes the two work together to bring out a really cohesive piece. Ballads can often be either too slow or too powerful but this song is written in a way that allows it to remain fast but still thoughtful.

This ties into performance where, again, VIXX rarely disappoints. The singing is excellent, and the interpretation is emotional yet controlled. It’s not too slow and emotional nor is it screamed out at the top of their lungs. The singers straddle the line, and they come out with a song that is one of my favorite ballads to date. 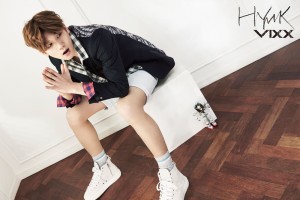 And we’re on to our last track on the single. With Leo in the limelight for his original composition, Ravi gets a turn as well for composing and writing the lyrics for “Memory.” He already has experience in writing, having been credited on most of VIXX’s songs as a rap lyricist, but this is his first time composing and writing for the group. He does a fair job, producing a power ballad that has emotion and depth. And although I am not always a fan of his delivery of rap lines, he writes this song in a way that it makes his style of performing fit with the song itself.

However, I believe the true star of this song is Hyuk. This song is a duo between the two, and for once Hyuk gets to sing full choruses, all on his own. He has definitely matured as an artist and as a singer and shows that he is able to carry the vocals of a song by himself. The performance isn’t overwhelmingly difficult from a technical perspective, but he does a very good job with the vocals in and of itself, and I think he should be recognized for that. It definitely is noteworthy considering he doesn’t usually get as many lines, and I’m proud of him for working hard enough that his vocals can carry a song. (Maybe Jellyfish will even let him sing real verses in the future!)

Boys’ Record, in the eleven-and-a-half minutes it takes to listen to the whole thing, is a microcosm of VIXX’s versatile abilities. A cute song, a ballad, and a power track all in one short package, with two original composers and lyricists to boot. VIXX continues to impress me with their versatility and raw talent, and I can’t wait to see more original stuff from them.