Minah Brings Many Concepts in "I Am A Woman Too" 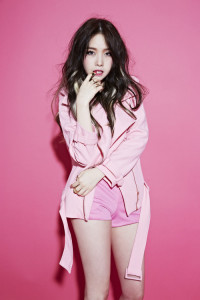 After releasing track after track as a member of Girl’s Day, Minah finally drops her solo debut to much fanfare. Minah has shown her potential as the main vocalist of Girl’s Day, and leaves us expecting a lot from her debut album. Girl’s Day’s songs do not give Minah lots of room to show us what she is capable of, having covered songs like Kim Hye-lim’s “Farewell for Myself” that leaves us wanting more of those husky undertones.

To much ado, the MV for Minah’s single, “I Am A Woman too”, dropped on the same day of her showcase in Myeongdong, where she was first became an online sensation as a singer. It was quite nostalgic to have her start off her debut career at the same place where it all began.

As the face of Girl’s Day, the MV and the song both managed to dazzle fans. The track had an R&B feel, coupled with funky beats and bass riffs, complimenting Minah’s vocals. The song was slightly sentimental, yet had a beat that listeners can’t help but jiggle their feet to. A little too reminiscent of Girl’s Day’s music, the song certainly didn’t live up to my expectations as I expected a song that could fully show off her vocal capabilities.

With three different concepts, the MV was quite confusing as a whole. It’s really hard to start describing the MV and the plot, if there is even one. The scenes cut to each other really fast, but you can more or less realize that the MV is about a girl struggling with her feelings towards the guy who doesn’t seem to replicate them. 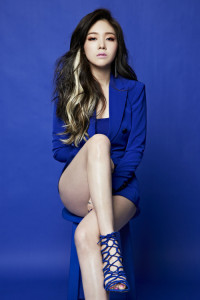 Minah had a bad-ass side to her, dressed first in bright red from head to toe, coupled with killer heels and later in deep dark black. The second was a girly one, dressed in innocent white and later in a whimsical lace outfit. Finally, the last concept is a sexy one which appears during her dance scenes  of her in a short dress, revealing her long sexy legs. Each of these concepts are excellent in their own way, and Minah manages to rock each look to its max. While I loved all the concepts because she seems to suit both girly and bad-ass looks, more coherence could have been achieved if the director had a clearer idea of how he wanted to portray Minah. Even the concept photos couldn’t decide if Minah was a sexy seductress or a playful innocent waif.

As the title clearly states, the song tells of a girl who wants to be loved, and as a woman while he’s at it. The lyrics are certainly quite fed up with the person that it is directed to. I don’t know if it was meant to be like that, but Minah was quite emotionless throughout the whole MV. Yes, her mouth was moving, but at times her face and body was rather rigid and expressionless. Maybe it is part of the director’s vision, but I felt that there could be more going on. 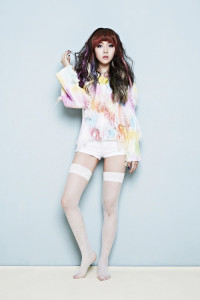 The setup and backdrop were actually done up rather nicely, resulting in all the scenes being breathtaking in their own way. The decoration of the distressed bedroom, the kitchen, and finally the garden with floating petals ends the MV with a very fairytale-like ending. From the teddy bear to the countless clocks on the wall, each scene leaves its own impact. The MV leaves the viewer in a rather magical mood, like anything could happen, and that maybe, just maybe, we will all start to look at Minah as a woman from now on.

Other than that, the MV is rather easy on the eyes and gives us no doubt that Minah is indeed the face of Girl’s Day. It could have definitely done without those dance scenes, which were slightly awkward. But then again, most of the other Girl’s Day dances are quite awkward in their own way, so it could have been her incorporating a little element from her group into her image as a solo artist. The whole MV is rather aesthetically pleasing, and captivates the viewer, allowing you to appreciate the song and Minah’s looks for what it is. Check out the other songs on her album for an enchanting elegant mix of tracks that will definitely turn you into a Minah fan.