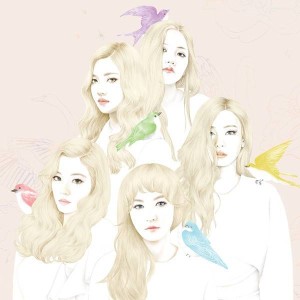 With scrumptiously sweet hopes after the suave and sophisticated remake “Be Natural” in October of last year, Red Velvet has emerged out of the dainty, pastel-colored and breathtaking multitude that is girl group and solo artist comebacks this month. On March 15, the group revealed their comeback album Ice Cream Cake and a later music video for one of the albums two title tracks, “Ice Cream Cake.” Along with an innocent, blonde-locked, blue-eyed concept image to cater to the “velvet” side of the group, Red Velvet also introduced new member Yeri, first in “Automatic” and then more prominently in “Ice Cream Cake.” Based on the stunning album art and the heading track of “Ice Cream Cake,” Ice Cream Cake is Red Velvet’s testament to the fashionable, the carefree and the boldly feminine.

“Ice Cream Cake” unfurls with a golden plate holding up a big, gorgeous, and prettily frosted cream cake with a huge slice removed from it by rainbow-colored fingers. The scene then pans to a retro — albeit deserted — gas station with all five members dancing a quick-paced choreography, Seulgi taking the lead both vocally and dance-wise. The succession of “las” unfolding in the background as the music video progresses not only adds a bit of a creepy and vintage feel to the song, but that mood is suddenly broken by a completely fresh set of electronic beats that adds some musical variety to the budding song. As soon as Irene and Wendy make their entrances dressed in white and hair curlers, the song takes a pleasant turn and prepares for the catchy and lyrically significant chorus.

Please give me that sweet taste, ice cream cake

With a flavor that fits this special day

The ice cream that’s on my mouth

Makes your heart pound and you’ll come to me

It’s so tasty come and chase me, I can’t hold it in

The role of the “ice cream” the girls are beguiling their helpless love interest with has powers of sweet temptation, innocence and childishness and functions as a grounding hook for the song even, through the majority of the setting has nothing to do with ice cream or ice cream cake. In fact, the abandoned gas station scene where the choreography takes place sets the song up for a casual and playful melody where the girls meet up to have fun together. Independently, each member is pictured in their own little niches, Joy lounging on a leather couch and Yeri enjoying the desert sky on top of an RV. When they all flood together into a baby blue car, we see them on the way to their evening amusement with delicious caramel frappes and tall glasses of mint ice cream accompanying them. 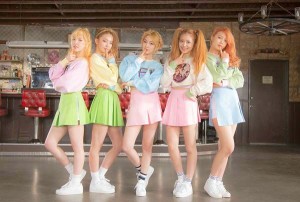 Musically, “Ice Cream Cake” has a simple melody that relies on the repetition of specific English phrases to make the tune stick. Seulgi, Irene and Wendy make up the visual trio with pretty voices to spare, and Joy is in charge of the denser lyrical segments with Yeri accompanying her in many visual shots. Although the song builds up to many colorful beats and lyrics, it falls out in the end due to a lack of more diverse musical patterns. The MV is far too complex for the song but has the possibility of balance – light and limited lyrics to go with an intricate and interesting music video.

In terms of appearance, each member gets her turn in the spotlight. Although Yeri is not seen very often in her own individual shots, she is given some prevalence in the choreography. Her role in “Ice Cream Cake” is plenty since she is being introduced for the first time, and viewers receive a first-hand opportunity to see what sorts of skills she possesses – thus far, she seems alright. Hopefully Red Velvet showcases her vocal skills more in later tracks and gives us reason to believe she is a valuable addition to the group. 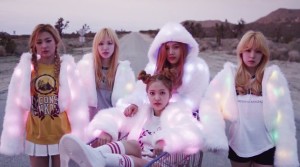 The best scene in the entire MV is near the conclusion of the song; each of the girls running down a lonely road dressed in neon-LED fur coats, Yeri pushed in a grocery cart and Seulgi clearly exhausted. The song continues in its path of candied repetition and does not diminish or fade out; rather, a covetous tune asks for what was sought in the beginning – “your lips.”

“Ice Cream Cake” is a sugary addition to Red Velvet’s versatility and suits them above any of their other concepts. Indeed, they should gratify their “red” side a bit more since it works the best for them and is far different from any of the “cute” concepts put out by other girl groups. The music video is whimsical and lighthearted: it makes the song stand out even more and adds an original flair to the overall picture. By emphasizing simplicity in their lyrics, Red Velvet succeeds in baking up a fresh and memorable song.