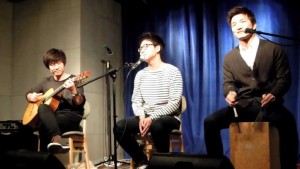 Welcome back to K-pop Indie Gem! If you’re into the Korean indie scene, you’ve probably noticed that acoustic music is quite popular; there’s no lack of artists who produce melodic, simple tunes that evoke the coziness and warmth of a coffee shop. This week’s artist is Papercut Project, a trio that is devoted exclusively to producing the acoustic type of songs that K-indie is known for, though their ability to express a wide range of emotions sets their music apart from the usual cheerful coffee shop fare.

Papercut Project is actually a union of artists from two other indie bands. Yoo Kyung-pyo, the group’s guitarist, and Kim Doo-hyun, the percussionist, are both members of the band Soulights, while vocalist Go Chang-in also sings for the band Sugarband. The music that these three produce as Papercut Project is significantly more stripped down than anything you would hear from their other bands; with only a guitar, a cajon (the percussion instrument you can see in the picture above), and a voice, all of Papercut Project’s songs are simple affairs. Their small group and clean sound is ideal for live performances on tiny stages. 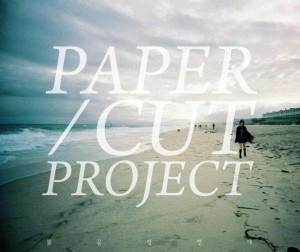 As somewhat of a side project for the three members, the band focuses mainly on these small, intimate live performances, with only two albums released since their formation in 2013. Their first release, Unfair Love, presents listeners with a comprehensive picture of what the group can do: cheerful and catchy tunes like “I Want to Know” that are more typical of the coffee shop variety of K-indie acoustic songs are balanced out by more uptempo, melodic offerings like “Papercut” and slower, somber tracks like “Why Today.”

Perhaps the best representative of the bright and lighthearted side of Papercut Project is “A Face You Can’t Help but Fall in Love With.” While the song has the optimistic feeling that is essential to achieving the K-indie coffee shop sound, it is an unassuming approach to the genre; it conjures up the warmth associated with cozy cafes without the sugary-sweet, cute sound that sometimes dominates other acoustic songs. As you listen, you almost get the sense that this is a grown-up version of the coffee shop genre, with the band mastering the mature and endearing sound that other groups like 10cm are known for.

A more melancholy side to the group is exemplified by the track “I Couldn’t Do It All Well at First.” As Go Chang-in sings a song of apology to a lover for his failings in the relationship (which happen to be quite small issues, like not knowing good ways to answer her questions), you can feel his guilt mixed with a slight resentment towards the high standards his girlfriend held him to. It’s sad, but not loudly so, and it won’t bring you to tears. However, the disheartened mood that the song conveys will bring listeners into a somewhat sweet heartbreak, once again demonstrating the group’s tendency to present emotion in a subdued and subtle manner.

Papercut Project’s second album, 1892014, takes a more optimistic turn, offering up songs like “Love Again” and “Night When Only the Waves Linger” to uplift any listener’s mood with their fluffy and sweet sound. 1892014 shows off a sugary mocha to Unfair Love‘s more mellow cappuccino, with only a few slower, sadder songs on the tracklist.

These include “Standstill” and “Squatting,” which both help to balance out the album’s overall cheer. “Thinking Once Again” is another one of these more downhearted tracks, and it manages to convey a sweet sorrow that makes it one the most haunting and memorable songs on 1892014. While it’s got a choppier melody than the other slower songs, the slight roughness enhances its emotional impact.

The catchiest and most infectious song on the album is, hands down, “Ambiguous Again.” With an uptempo rhythm, it basically forces you to sway along and captures you for a few minutes. It’s nearly impossible to be down when you hear this song — though, the band still managed to keep the track’s brightness from boiling over into dangerously cheesy territory. By enticing listeners with its liveliness, this song is an example of Papercut Project’s chief strength: the ability to affect listeners’ moods without blatant effort. The band’s portrayal of emotion is toned down enough to be believable.

In explaining their reason for forming Papercut Project, the members described it as an effort to “express their music and themselves,” and it’s easy to tell that they stay true to this goal.

While the calm and subdued nature of the songs might not instantly grab attention, it’s safe to say that you’ll find yourself unexpectedly entranced when the music ends. The band creates music that not only expresses themselves, but encourages listeners to express themselves as well by lulling them into different moods as the songs go by. If you think about it, that’s what good coffee shop music should do — enhance the atmosphere without dominating the mood, contribute to the warmth of your surroundings, and allow for you to reflect as you sip some sweet coffee.