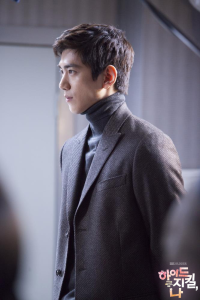 These episodes have been the best so far with twist after twist after twist! Just when you think the series is going in one direction, it blindsides you with another revelation. Spoilers ahead!

This week is all about confronting, or avoiding, the past. We learn a lot more details about Seo-jin’s kidnapping and what made him the man that he is today. The turning point for Seo-jin (Hyun Bin, Secret Garden) was not simply being kidnapped, but being unable to rescue his friend, Soo-hyun, and leaving him behind. He never knew what happened to his friend and assumed that he had been killed when his ransom wasn’t paid. Seo-jin even stood on Soo-hyun’s shoulders to reach the window and get out, but he didn’t have the strength to pull his friend up to safety. Not only does Seo-jin have survivor’s guilt, he is extremely ashamed of not being able to save his friend.

So now we know that a lot of his quirks are really his guilt expressing itself through self-harm and self-punishment. Seo-jin attempted suicide at least once which resulted in Robin being born. It seems like afterwards Seo-jin felt that death was too merciful a punishment, so he decided to live without happiness. He cut himself off from others long before he tried using it as a method to control Robin. He worked, but never fell in love with his job. He had money, but never used it for fancy cars or island getaways. Ha-na (Han Ji-min, Rooftop Prince) sees how he even denies himself good food; there’s plenty of salad greens and green smoothies but not a single grain of rice. He doesn’t even give himself the pleasure of seeing himself as a nice person. Although many would call him arrogant, that would be inaccurate because he doesn’t claim to be better than others; in fact, he has a very low opinion of himself. 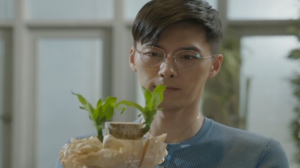 Proper care might have helped Seo-jin, but he also felt abandoned. His father (Lee Deok-hwa, Spy Myung-wol) refused to pay the ransom, and afterwards he blamed Seo-jin for his mental “weakness.” Seo-jin was treated more like a possession that was stolen and scratched up, not a child. In these episodes Seo-jin sees that he is more like his father than he cares to admit. Although the primary reason for his change in attitude may be Ha-na, Robin’s accusation that he couldn’t understand how being rejected and ignored feels hits him like a rock. Of course, he knows how it feels; he experienced it first-hand. And he must also feel that he abandoned his friend just like his father abandoned him.

So other than just protecting Ha-na, the decision to take an interest in Wonderland is also a way to stop being like his father. His father, after all, was also ready to fire the whole circus troupe without a second thought. By making Wonderland a place for love and dreams, Seo-jin shows that he’s at least interested in planting some roots and coming out of the shadows. He himself admits that he wants to find happiness and live again. We can see other examples of this such as when he almost joins the circus troupe at the bar. He also cares for the lucky tree root Ha-na gave him, literally something that can take root and grow. They are all little ways in which Seo-jin is trying to become part of the world. And although he is extremely wary of getting his hopes up, with Ha-na and Robin on his side he’s being pushed into a better future. 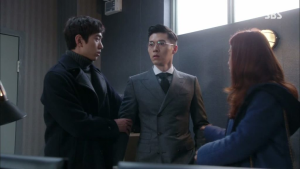 Critical to his recovery is dealing with his past which is shoved front and center in these episodes. Learning more details about the kidnapping shows that Robin is more than just Seo-jin’s inner child, he’s also all that is good in him. The scene with Seo-jin’s escape is eerily similar to the bridge scene when Robin was born. Ha-na ends up hanging onto Seo-jin’s hand, but like Soo-hyun he is too weak to lift her up. But this time Seo-jin’s higher self (Robin) emerges and refuses to let the past be repeated. Saving Ha-na was a way for Seo-jin to redeem himself, along with the other people Robin has rescued. Robin is part of Seo-jin, possessing the friendly, caring, and self-sacrificing qualities that Seo-jin always had. The problem is that Seo-jin feels so guilty about his past that he cannot see himself as a good person, much less a hero.

And while Robin contains all that is good about Seo-jin, the innocent looking psychiatrist Yoon Tae-joo/Soo-hyun (Sung Joon, Lie to Me) poured all of his malice and vengeful thoughts into his own alter ego, Ahn Sung-goon. Like Seo-jin, Tae-joo also has his own hidden rooms and secrets; even his turtlenecks hide the burns on his neck. It turns out that Dr. Kang Hee-ae (Shin Eun-Jung, Misaeng) knows that Tae-joo is the only way Seo-jin can get better. In other words, Seo-jin confronting and reconciling with his past (Tae-Joo/Soo-hyun) is the only cure for him. So we can expect these two to go head-to-head pretty soon since Seo-jin is desperate to get better and Tae-joo vows to get revenge. 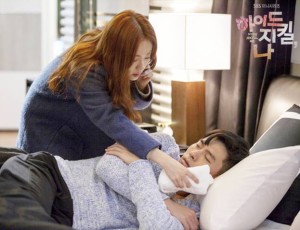 Apart from the interesting developments with Seo-jin, the series also puts new twists on common Korean drama plot lines. A lot of these are because Han-na is not your typical Korean drama female lead. One scene we see a lot is the love confession to a trusted friend which is overheard by the male love interest who’s lurking nearby. In Hyde, Jekyll, and I the gender roles are switched and Robin is the one who talks openly about his feelings for Ha-na. This gives her the opportunity to confront him head on, something women don’t usually do in dramas.

After learning that Seo-jin deleted the texts, she even warns Seo-jin to stay out of her personal business. Again, usually this scene is played by the male lead who warns the love interest to stay away from other men. There is also the “man falls sick so woman takes care of him” scene. But when Seo-jin finally rejects her, Ha-na doesn’t just crumple up and cry as expected from female characters. Instead, she fights back, calling him a ghost and giving him a taste of his own medicine. Ha-na shows again and again that she’s not one to be bullied, which is nice to see.

Now that we know who the real Soo-hyun is, we can only expect more revelations and twists! With Soo-hyun promising to take his revenge out on Seo-jin, next week’s episodes are sure to be entertaining!