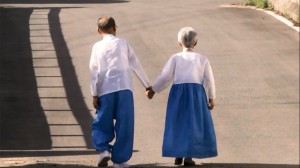 Released on November 27, 2014, My Love, Don’t Cross That River (님아, 그 강을 건너지 마오) is a phenomenally successful indie film, and also very likely one of the most profound documentaries ever produced in Korea. Within a 86-minute screen time, director Jin Mo-young tells us the heart-wrenching and beautiful story about an elderly married couple, as well as their final goodbye after 76 years being together.

My Love, Don’t Cross That River brings you to an oasis of love, where a grandpa, a grandma, and their dogs live contently away from the rest of the world. The grandparents still wear the traditional hanbok, collect wood to keep them warm in the winter, wash their clothes using bare hands in the stream next to their house, and talk to each other using the honorific. Without computer, TV, or even radio, their serene life never lacks hearty smiles. When the couple had free time, they would sing and dance, play in the snow, or just take a stroll together, hand in hand. 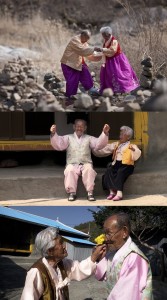 If it was not for the appearance of a rice cooker and a landline telephone, you would not realize that this is a film set in South Korea 2014 — a country with the world’s fastest Internet connection speed, where almost everyone lives on their smartphone, where K-pop idols and plastic surgery are the mainstream, where sky-rocketed buildings surround your every step.

Perhaps, this is the reason why this fairy-tale-like story about 90-year-old people has been attracting a large amount of young viewers. They leave the movie theater thinking, “I want to live like that”. In a sense, the film has achieved more than just successfully reflecting a touching story, it gives people a belief that true love exists, and it can be very simple.

The film’s title comes from a famous Korean folk song “Don’t Cross That River”– 공무도하가 (gongmudohaga), in which the husband does not want his wife to cross the river for her own safety, and chooses to go on his own instead. There can be another implication, since for Korean people, as well as for many other cultures in the world, the river tends to symbolize a border separating two realms of the living/yang and the dead/yin. This idea can be observed in the first scene.

My Love, Don’t Cross That River begins with a sorrowful opening sequence, in which the grandmother is shown mourning over her deceased husband. On the hauntingly beautiful background of winter where everything is covered in white snow, the screen is split into two as the grandpa’s grave and the grandmother are situated opposite of each other. A small river is running between them. There is no music, only the rueful howl of the wind and the woman’s cries. From the very first moment, director Jin overwhelms the audience with emotions.

After that painful opening shot, the film leaps back to when grandpa is still alive. Facilitated by superb editing, the normal everyday life of the old couple back then is gradually revealed. There is one fine morning when grandpa is busy playing with grandma by throwing fallen leaves on her, which seems to be too playful to be coming from the almost 100 years old man. Or that evening when grandpa has a cough, and his wife stays up through the night looking after him. They do everything together; family gatherings, cooking together, and taking care of their dogs together. With My Love, Don’t Cross That River, Director Jin Mo-young has proven that he is truly a master of storytelling. Happy and teary moments, ups and downs in a person’s lifetime, are smoothly interlaced throughout the film. There is no roller-coaster of emotions, since the pacing is really slow, enough for the audience to notice and appreciate small gestures between the two elders.

Another beauty in My Love is the breath-taking nature that has been captured and rendered so perfectly on the screen. The nature itself is not so grand that you will feel overwhelmed. Through the language of cinematography, the filmmakers tell us about how modest things around us can be so stunning. The sounds of rain drops, a frog swimming freely in the stream, birds chirping, and wild cherry blossoms. Korean nature is rendered at its finest little moments. It would not be an overstatement to say that nature is a true protagonist in this film. She is a witness, but also a protector to ensure that pure atmosphere embraces the old secluded couple. 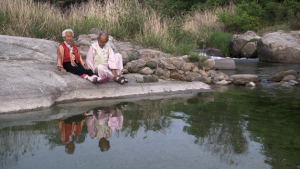 In order to fully capture the essence of this relationship, director Jin has lived with the old couple in their hometown — a small village in Hoengseong County, Gangwon Province for 15 months. “I tried to shoot the lifelong love of the couple without affectation. I would like to say about endless love through this film,” the young artist commented.

Patience pays off, since the film has received the Audience Award at this year’s DMZ International Documentary Film Festival. It also receives attention for having unexpectedly drawn so many youngsters to the theaters. Up until Dec 25, 41.50% of the audience belong to those in their 20s, while 22.50% of the moviegoers are in their 30s. In many cases, these young people will watch the film and then introduce it to their parents, and that’s how a low-budget indie film with very little advertisement like My Love can earn a higher revenue than Hollywood’s blockbusters like Interstellar or The Hobbit. It was so immensely well-received that the number of theaters that screen My Love rose from 186 to 806 within a few weeks after the premiere.

It is true that the success of My Love, Don’t Cross That River is part of the overall success of Korean movie theaters for the last quarter of 2014. This season has witnessed such a record of cinema ticket selling that Korean newspapers have labeled it “the era of 2-million visitors per day“, and high sale occurs across almost every production regardless of genres and age groups. This big trend, nonetheless, cannot overshadow the fact that My Love, Don’t Cross That River is a truly amazing piece of cinematic work.

Let’s end this article with the teaser of this masterpiece. With this review, I hope our Seoulbeats readers will go search for the film, which is now being screened in some theaters in North America. Prepare some tissues. I promise you will shed tears quite a bit.