Heart to Heart, Episodes 1-2: The Bottle and a Faraway Place 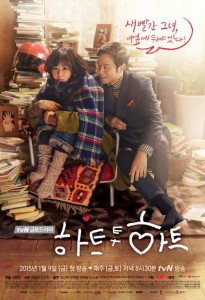 Shakespeare said “boldness be my friend.” In my mind, his words imply that when art is bold in temperament, it comes from creativity beyond the bottle. This homespun expression, “beyond the bottle” translates simply to art that has been created in a “faraway place.” And let me tell you, this “faraway place” bathes in boldness.

A K-drama that is “beyond the bottle” is art that has been created in a place far away from the presence of popularity, marketing, and cliché.

Speaking of popularity, marketing and cliché, in all of my travails as a K-drama nut, I have found one corporate distinction between how companies advertise certain dramas, and the quality of their production, props, and personas that are to be expected a posteriori. We have an all-kill K-drama with amazing characters, settings, and acting like You From Another Star. Prior to the magnificence, there is a size of advertising. Then we have K-dramas like tvN’s Heart to Heart that shocked me with its sudden birth. No mention or media beforehand for this one.

Highly advertised dramas receive soaring ratings, and this leads to more moola. More moola leads to better writing. Better writing leads to excellent production. And excellent production veins into flashier sets, exorbitant fashion, unrivalled attention, and an unprecedented legacy. Through serious observation and research paired with slushy winter nights and green tea, I would like to suggest that a drama like Heart to Heart, which received no advertisements or flamboyancy, is just as enthralling and entertaining to watch — simply because it is art from “beyond the bottle. 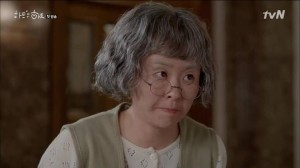 Marking Choi Kang-hee’s return to television after a two-year hiatus, Heart to Heart sees Ms. Choi as the female lead, Cha Hong-do. Hong-do is a 30-something year old woman with a serious case of anthrophobia and an adorably horrible condition (spurred by psychology) in which she blushes to the extent that her entire face turns red — Mostly when she encounters other people or public situations.

Due to her overwhelming fear of public spaces, she grows vegetables in her little mezzanine-garden and, with practice, excels at transforming herself into an old woman. That sounds quite bizarre, but married with the unmatched hot flushes, Hong-do’s part time profession of disguising herself as a halmoni and working as a housekeeper for the grandfather of our male lead, Go Yi-Seok (Chun Jung-myun) is an element that keeps this work-of-art drama beyond the bottle.

Yi-Seok is a famous psychiatrist who is introduced in a very misleading scene at the beginning of the drama. In a calm, and extremely human way he approaches a woman attempting suicide at the top of an apartment complex. He obviously saves her and feigns humility. In reality Yi-seok is egoistic, uncommitted, and suffers from a mysterious illness. Next we meet him on the cover of his freshly published book; the content still remains abstruse, but is apparently enough to motivate Hong-do to pick it up, exhausting herself night and day reading it, and finally she decides she is worthy enough to love. 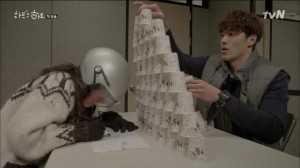 Her love is shyly intended for Jang Do-soo (Lee Jae-yoon), an extremely hunky childhood friend for whom she has cooked pumpkin soup and kimchi for the past seven years. Do-soo is also a detective in the local police station. Another element that proves that Heart to Heart is beyond the bottle is the startlingly superlative undertone to Hong-do and Do-soo’s relationship.

It is not only due to the fact that they have never seen each other before, but also because of the idea that their relationship would make for a potentially wholesome K-drama of its own. Do-soo is always engaged in actives where he is scaling walls, chasing lunatics, and apprehending dangerous criminals; but in front of Hong-do he is patient, gentle, and never misses an opportunity to compliment and thank her. Hong-do is more ambiguous in her demeanor, but her intent is clear. She is utterly devoted to Do-soo and even resolves to get help (from Yi-seok ironically enough) to meet him face to face. If it wasn’t determined that he was the second-lead, and if the arrogant Yi-seok and his chocoholic sister Go Se-ro (So-hee) weren’t in the way, Hong-do and Do-soo could have a romantically comedic K-drama of their own. This idea by no means confirms that I have second-lead-syndrome, my mind is subject to change later on. Maybe. 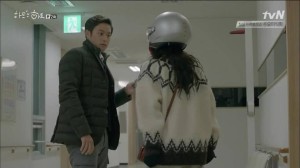 Sepia, indie, and cerebral (pun not intended), Heart to Heart captured my attention from the beginning. The cast is certainly not as well-known as others, but the storyline, foibles, hues, and uniquely distinct theme of this drama make it worthwhile and exciting to watch!

I have to add, in the scene in episode two where Ho-dong is emotively dancing on the dark streets right after Do-soo asks her to meet, there is a beautiful and innocent sequence occurring in her mind. She sees two pairs of shoes on the feet of two people. One pair belongs to a brawny gentleman, and one to an awkward and warm-hearted woman. The second those two pairs of shoes start dancing together, you can’t help but be enamored with the idea that you have to see more.

Readers, would you say that Heart to Heart is art “beyond the bottle”?