4TEN Ask "Why" In Sophmore Single 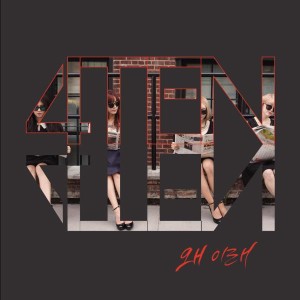 Announced as the first ever girl group to debut under Jungle Entertainment, as well as the sister group to label mates MIB, expectations have been reasonably high for 4TEN as the next badass hip hop girl group to rival their counterparts.

Armed with two rappers and two vocalists, their first single “Tornado” turned out to be not the strongest of debuts — which is understandable since they are still newbies — and proved that they need to work on finding their sound. Despite this, the song did remain an easy listen, and featured the girls travelling to L.A to shoot the rather uninspiring music video.

In a similar vein, for their second single “Why”, the girls take us to the streets of New York this time as they question just why oh why is love such a game, through what I found to be another equally as uninspiring music video.

[youtube https://www.youtube.com/watch?v=XMAIIKUKsoQ] On first viewing, my initial reaction was that New York looks like a pretty cool place to visit. My second thought was that the video was more or less like a straight up documentation of a tourist trip to the Big Apple, because it is just overflowing with shots of all things that are “New York.” The location of the shooting completely overshadows any sense of storyline or concept possibilities that could have been utilized for a song like this — which is a shame because it is a nice song to listen to. The video begins with an image of the New York City skyline, then, as the girls arrive with luggage trolleys in tow, the rest of the MV is pretty much just consists of images of street signs, maps, a trip on the subway, or shots of the girls visiting various landmarks and taking in all the sights, including Times Square and The Statue of Liberty. 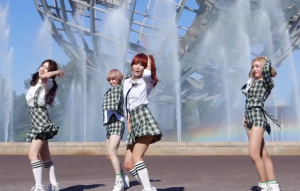 However, having said that, I’ll also argue that it is a vast improvement to their previous video since at least this time, having chosen New York as the filming location, the production team made sure that they made use of all the background scenery available to them to make the scenes much more memorable.

A good example of this are the choreography shots, where the girls dance in front the Unisphere — a giant awesome looking steel globe — in Corona Park, NY. The effect ends up looking pretty cool, but at the same time it distracts from the girls as our attention becomes drawn more to the background imagery, rather than focusing on their cutesy dance moves.

Also similar to their last MV, there is a somewhat lackluster attempt at a storyline that becomes pretty random and unclear at times. The girls arrive appearing all hung up on their love issues and constantly staring down at their phones. But at one point when they all sit together looking at their phones in unison, Eujin realizes their phone background pictures are all of the same guy (MIB’s Kangnam), and realizing he is a major playboy, they all laugh it off. 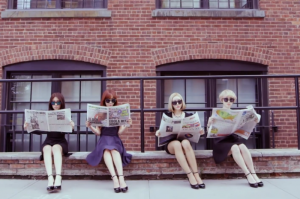 However, this concept is not transcribed onto the screen well and instead of developing it further, the MV focuses on the girls possibly just brushing it off to have fun instead — with an outfit change scene also thrown into the mix showing the girls willfully staring at a store mannequin before transforming into cat-walking bombshells that wear sunglasses and read newspapers headlining current events including the Ebola outbreak.

As a song, “Why” has a nice cheerful beat, which comes across as quite generic but still easy on the ears. The girls are able to demonstrate more of their vocal capabilities on this track, and I can almost imagine it featuring on a drama of some sort.

Another positive point is that the girls seem to be a lot more confident in this music video, and much more comfortable on camera in individual shots as well as group shots, which is always a good sign. The chemistry between the four also works well, with noticeable vocal talent from Hye-ji and Hye-jin, as well as impressive rap delivery from both rappers, Tem and Eujin. There is a lot of potential to work with here, but as a rookie group who is still relatively unknown, the ladies of 4TEN still have quite a way to go if they really want to gain some traction on the scene. Hopefully, the next video sees them branch out and experiment more, so they can make more of an impact.