K-pop is a highly visual experience and is unlike any western music industry. Choreography, stages and concepts are constantly reworked to offer the best package possible. Of these visual aspects of K-pop, fashion is a high priority as idols must perform on multiple music stages in different outfits and even look good at airports.

Like all fashion, K-pop fashion has its ups and downs albeit with many, many, downs — every time it seems as if K-pop fashion can’t get any worse, it does. So what better way to end the month than to relive all the cringe-worthy fashion your favorite idols wore?

First up is the awful overalls Got7 wore in their latest music video. This is not the ’90s, and no matter how hard you try to emulate it, Got7, you can’t bring it back. Please just stop.

To make matters worse, it wasn’t just one set of overalls that the boys were forced to wear but two. Two! While the white ones are bearable, the blue overalls are the same color as my recycling bin. This obviously means that JYP is trying to subliminally promote Earth conservation. Maybe that’s why they haven’t been promoting their artists like they should be ….

There is so much going on here that I don’t even know where to start. There’s a colorful suit that looks like a plastic paint tray that barely survived multiple art classes of elementary-aged students, a cowboy-type jacket with frills and a matching cowboy hat, a furry cardigan made from the fur my cat shed yesterday and a shirt with the top half made from bird feathers — yes, feathers. With all these strange combinations, the zebra stripe jacket with shoulder tassels doesn’t even compare.

And, of course, we can’t neglect the wonderful world of airport fashion. While I definitely do not condone following idols to airport, I’d be remiss if I didn’t include airport fashion in my Worst of K-pop Fashion search. After all, some of their fashion choices leave me scratching my head.

The cold winter months are perfect for bundling up, and even if fashion isn’t your first priority, it’s not hard to not look terrible. Unfortunately, no one told this to B1A4‘s Baro. 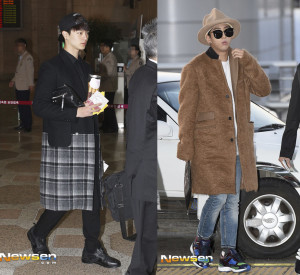 Seriously, did he pick the coat out himself? Perhaps it’s warm, and he’s comfortable. If so, good for him. I just prefer not to wear something that looks like a bear died on my shoulders.

A much lesser offense to the eyes was BtoB‘s Sungjae wearing a long coat with an identity crisis. From far away, it almost looks like Sungjae was wearing a plaid skirt. In fact, his outfit would have improved had he worn a plaid skirt instead of this mismatched coat that makes his legs look shorter than a toddler’s playtable.

Lastly, for November’s Worst K-pop fashion is something truly offensive. While the aforementioned outfits were critiqued in fun, Pritz‘s Nazi-like imagery on their outfits was completely distasteful. The rookie group was rightfully criticized for the similarity of their armbands to the Nazi logo, but, instead of modifying their outfits and MV, the company chose to keep things as they were. Their utter disrespect is disgusting and completely unacceptable. 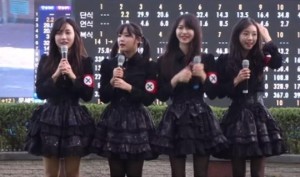 While the last mention was a reprehensible choice of clothing, the majority of November’s worst fashion was comical. The black-feathered shirt and brown bear coat were my favorite ridiculous outfits, but December is sure to top them as idols aim to take holiday-themed clothing to the next level. Join me next month to assess the worst of K-pop fashion, and let’s hope your faves don’t make the list!

Disagree with the choices I picked out? Have your own suggestions? Let’s hear it in the comments below!