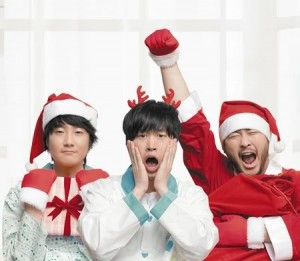 K-pop and Christmas go together like peanut butter and jelly. Or more accurately, romance and Christmas go together, and entertainment companies recognize the money making potential of that connection. Entertainment companies have their most popular artists make Christmas albums or they do a collaboration piece with idols and soloists alike. It’s all for the money — and yet, it certainly does give a sense of holiday cheer to the industry.

How do you feel about K-pop Christmas releases? And what’s your favorite holiday K-pop song?

Chelsea: Christmas songs hold a special place in my heart, and K-pop Christmas releases are always a welcomed addition to the holiday cheer. That being said, I think when it comes to K-pop Christmas, I get more enjoyment out of the special stages, and music videos — like Shinee’s “Colorful” or Starship’s recent “Love is You” — than the songs themselves. Any sort of festive concept (like Exo in suspenders), is a guaranteed win for me.

My absolute favorite K-pop Christmas track is Shinee’s “Santa Claus is Coming to Town.” A close second would be Exo’s “Christmas Day.” On the whole, I think SM does Christmas well, whether it’s the The Warmest Gift holiday album or SNSD’s “Christmas Fairy Tale” TV special, I enjoy it all.

Hania: I’ve always struggled to enjoy Christmas songs of any description, finding them cheesy and gimmicky. However, the air of merriment that K-pop Christmas songs bring is undeniable, and it’s certainly a clever tactic for entertainment companies to use.

My personal Christmas favourite would be Exo’s Miracles in December mini-album, and I’m with Chelsea on the fact that “Christmas Day” was absolutely gorgeous. It was a simple and stripped back song which managed to subtly tie in Christmas as a theme, without making the whole thing cheesy.

Hopefully this roundtable can introduce me to some Christmas songs and get me over my general dislike of them!

Sidrah: I agree with Hania, Exo’s Miracles in December is the only Christmas album that I have found bearable enough to listen to all the way through only because it was less focused on the cheesy. It has this beautiful, laid back vibe to it that I could just keep on repeat all day (Plus I’m a total sucker for D.O‘s voice).

I’m also loving the new track “Before the Snow” by Kanto of Troy. His carefree style of rap combined with the breathy vocals of As One make a really great mix.

Cjontai: As much as I abhor holiday music, I did enjoy Exo’s “Christmas Day” performances from last year. It felt a bit naughty for the season, which for me is welcomed when overwhelmed by an influx of fan service videos. I did, however, enjoy Shinee’s “Colorful.” Since they’re always so playful, it wasn’t awkward to see them in full aegyo mode. I think that is an issue for me with a majority of holiday releases. Most of the time, it looks like everyone at the company party was forced into a group song for the president, but they really wanted to drink spiked cider instead. It’s painful. This is supposed to be a season of cheer, so if the artists come off as miserable, it kills the mood.

I want to also give an honorable mention for “Melt My Heart” by Eric Nam. It was festive and heartwarming. It was one of the few songs that didn’t make me want to throw a kitten onto thin ice. On that note, I’m very thankful for not getting a million more covers of “Let It Go.”

Nick: I’m totally with you Chelsea: I start listening to Christmas music as soon as we throw away the jack-o-lanterns! Christmas music really puts me in the mood, but I can get kind of picky with K-pop’s deliveries to the season.

My hands down favourite carol has to be Ailee‘s rendition of “My Grown Up Christmas List”, in both her Korean and English versions. It’s the best rendition of a Christmas carol, by an English or Korean or otherwise singer, that I’ve ever heard. SM Town‘s Warmest Gift is worth mentioning for traditional carols, although I do think it would’ve sounded more natural if they caroled in Korean.

Miracles in December ranks high up there for original music, although I don’t find it the best for bringing up the mood because all of the lyrics are kind of gloomy. “Christmas Day” will forever be associated in my mind with Exo’s rather suggestive live choreography, but “First Snow” definitely has that cozy winter spirit. And yes, Cjontai, Eric Nam’s “Melt My Heart” is quickly becoming one of my favourites!

Mark: My favorite is “Love Letter” by Happy Pledis because we got to see and hear from some of its trainees who would later debut in NU’EST and Hello Venus. Not only was there an MV, but the trainees also got to perform on a live stage. I wonder why Pledis stopped doing Christmas specials because this was such a good idea.

Andy: In general, I enjoy the new songs that come around at Christmas. We get to see some interesting collaborations within labels and new styles. My favorites, however, are remakes of classic songs, even if that leads to some funny English. In particular, I love As One’s 2002 album, Caroling. Their rendition of “White Christmas” is wonderful.

Lindsay: Personally, I love K-pop Christmas music; I know it’s all just a marketing ploy, but still. When compared to Western holiday music, the only real difference is the language — both are corny as hell — but contemporary pop Christmas music in America is just painful to listen to. Plus, the best Christmas releases in K-pop are company collaborations, and those only work because of the fan dedication that is specific to K-pop.

Anyway, I have too many favorites to count, but this year it is definitely The Barberettes rendition of “Jingle Bells.” But in 2012 it was the Orange Caramel/NU’EST collaboration, “Dashing Through the Snow in High Heels.”

Gaya: As a Hindu, I couldn’t care less about Christmas, and therefore, Christmas music. I enjoyed singing carols when younger, but I’ve long since outgrown that. There’s also the fact that Christmas music is so wintry, which clashes with the Australian summer heat I’m usually experiencing. I often don’t know whether to feel alienated or jealous when watching K-pop Christmas videos.

Lo: I am an absolute Christmas music grinch. I mean, I love the holiday. Decorating the tree, Mom swearing at the lights, the Christmas Hamster visiting, watching bad Christmas movies; it’s a fun time. But post-1940, there are only five songs I tolerate.

But one K-pop song has actually managed to impress me: Sonnet Son‘s “First Snowfall.” It’s jazzy and light, and makes it feel like Christmas, all warmth and togetherness.

Taylore: I seem to be in the minority here, but the cheesier a Christmas song is, the more I enjoy it. My absolute favorite K-pop Christmas song would have to be Super Junior‘s “Santa U Are the One” because it has the unrestrained cheer that I associate with Christmas from childhood. I’ve even been known to blast this song during the summer months just to remind myself of all the joy that’s waiting for me in December.

Amy L: Cjontai mentioned a certain song from Frozen, so I have no choice but to bring up B.I.‘s trap version of “Let It Go.” Personally, I find most Christmas songs cavity-inducing with their over-the-top cheeriness and generic upbeat melodies, so I appreciate it when the artist or idol group in question retains their musical style to put their own spin on holiday songs. Christmas releases that stay consistent with the rest of a group’s discography tend to be more thoughtful and memorable compared to the forgettable company family tunes. I want folky, dreamy Christmas carols from AKMU and B.A.P busting out “Warrior” style ferocity in the name of holiday cheer.

Cjontai: Amy, I would lob a snowball at you if I didn’t enjoy that rendition of “Let It Go” from Mix & Match. You saved another kitten from an icy demise. And thank you for bringing up BTS’ “A Typical Trainee’s Christmas” though because I forgot about that hilarious song! Leave it to one of K-pop’s most 4-D groups to write a song lamenting the struggles I’m sure all the idols are enduring right now. Idols, fighting!

Amy L: Yes! I’m all for more mutinous holiday songs by overworked idols. They’re a bit low on the Christmas cheer, but I can’t think of a more fitting end for this year.

Andy: Amy, since you mentioned Christmas songs that fit in with discographies, I feel like I should mention The VIBE Family’s new Christmas song, “Lonely Christmas.” It consists of VIBE, Ben, 4Men, Im Se-jun, Min Yeon-jae, and Mi. It fits in with all the artists’ typical music: soulful R&B with a melancholic feel. They sound absolutely wonderful together.

Willis: Andy, I absolutely adore the Vibe Family’s “Lonely Christmas.” They all sound incredible together.

I have not listened to K-pop Christmas releases for a few years, so my recommendations are a little dated. I remember really enjoying After School‘s “Love Love Love” when it was released four years ago. The bells and layered harmonies help to make the song feel like a K-pop Christmas classic. I also like to listen to Infinite‘s “White Confession (Lately)” from time to time. Although it is accented to fit the wintry season, the production of the song maintains that Infinite style.

Johnelle: Does DBSK‘s “Love in the Ice” qualify? Ice is mentioned in the song: Ice = Winter = Christmas? It’s one of my favorite K-pop songs of all time and their performance of it during their Five in the Black Tour in 2007 was pure perfection.

Camiele: To answer Johnelle’s question, no. “Love in the Ice” doesn’t count! It’s not a Christmas song. But “Evergreen” is. It was released on SM’s Christmas album in 2007, and it’s freakishly gorgeous. Composed by Yoochun. Lyrics by Changmin. I didn’t listen to the whole album, but I’m pretty sure it was the best song on it. That being said, I’m not at all interested in K-pop doing Christmas. If the aforementioned artists above are any indication, when it comes to Christmas songs, you do them perfectly or not at all. And just with those artists, it’s all about selection. So, as far as Christmas with K-pop, I’ll pass.

Irteqa: I don’t pay too much attention to K-pop Christmas songs or albums since they don’t apply to me and seem just a little bit superficial and oversweet. However, Christmas is a festivity that makes you want to buy a whole box of gleaming ornaments and stare at them all day long, smell the pine needles in the air, and take a drive with family to see the homemade arrays and displays of lighting and decorations. I just can’t help but revel in the mirth, music, and merriment of it all!

A couple of Christmas songs that I have enjoyed are Bom & Hi‘s cover of “All I Want for Christmas Is You” and Mystic89 family’s “Christmas Wishes.”

Albeit saturated in sappiness, Christmas songs are joyous and good for a heavy heart!

Readers, what are your favorite K-pop holiday songs to turn to this time of year?